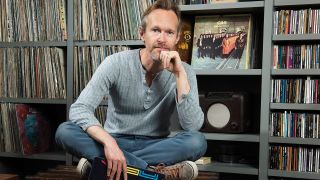 “I love the idea of buried treasure. I have that collector’s mentality of unearthing something rare that’s a real gem. Experimentation is key but in varying degrees – there has to be melody or rhythm to hang on to.

I’m a rhythm nut [gestures to practice drum kit in the corner] and hearing that in Gong is where this all begins.

I grew up in Cambridge. I remember being about 14 and hanging out with mates and someone stuck a weird record on and I didn’t know what it was and it blew my mind. That was Floating Anarchy, which is more punky for Gong, but I was intrigued by the electronic noises over it that I’d not really heard before, apart from on Silver Machine by Hawkwind. I did some investigating at Andy’s Records and I nabbed Angel’s Egg, which to this day I still think is absolutely brilliant.

"It’s whimsical and difficult in places but well-judged and it’s got groove to it. Angel’s Egg has a special place for me but You is a work of genius. This is an original pressing; in the 90s I did a TV series called The Buddha Of Suburbia and the early part of it was set in the 70s. I played a guy that became a rock star, loosely based on Billy Idol or Bowie. There was a scene with the lead character Karim where I took him to my attic bedroom, they lie down and light up a spliff and away they go. The director said to me, ‘What should they be listening to?’ And I said, ‘You.’

The art department got a lovely first pressing and gave it to me. You started my deep love of the weird and led on to Steve Hillage. I was obsessed with him, his guitar style on L in particular and and his groove. When he moved onto System 7 and the ravey stuff in the 90s, I followed.

Growing up, my friends and I all played instruments. I had a four-track recorder and made weird sounds, that was my universe. I was also really into punk and listened to my sister’s disco and soul records – and there’s some weird and wonderful space disco that I would seek out. My music taste became all about searching for hybrids, where very different things come together.

Blo are a classic example of a hybrid, an African band heavily influenced by psychedelic rock bands of the time. Chapter One has all the hallmarks of rhythmic African music but with great guitar freak-outs. I read about them and knew I had to get it – I paid some silly money. But it’s not the most expensive thing I’ve bought. That was Placebo’s Ball Of Eyes, Belgian jazz funk from 1971. That cost a lot.

A lot of my more unusual collection I heard about through my friend Steve Brown, an amazing, encyclopaedic music guy. We became friends through being neighbours, he invited me over for a cup of tea and he had this room full of records. I was like, ‘Oh my God!’ as he kept pulling out all these brilliant things. A lot of my choices are down to him so I have to give him credit. One was Fraser & Debolt – a Canadian duo from the 60s/70s who look gentle and easy but play with vigour, forcefulness and are just plain weird. It’s more a sound from 20 years later, indie and discordant. Quite an odd signing for Columbia, nothing commercial here at all: it’s just out there.

Steve had some private press records which totally suits me. He got me into Bobby Brown Live. He’s a Hawaiian hippie from the 70s and this is something recorded in his van on his own label Destiny. It’s DIY but it’s got this Polynesian flavour, with a drum box, harmonica and lap steel, overlaid with odd noises and long, extensive jams but it still hangs on to the melody. I feel like I’m in his van with him when I play it. I love the DIY idea that people are just sitting on their own using whatever’s to hand. You find that a little with soul music – take Shuggie Otis, who also used electronics and made soul a bit more experimental.

I’ve got a thing about people who do weird stuff with guitars, like Hillage. Michel Moulinié’s 1978 album Chrysalide is just that, cyclical stuff with double-tracked guitar and treated violin. It’s got something I really go for, a cosmic, transcendental feel with a bit of Mike Oldfield in there too. I don’t even drink these days, music does the transportation for me.

When you start discovering some bands you come at them from a weird angle but as it’s your first encounter you love it. I came at Frank Zappa from the later stuff and I still love those records. The same goes for Can. In the 90s I read an article where John Lydon was talking about music and because he mentioned them I had to listen. Can perfectly marry both sides of my listening; there’s the funkiest drummer in the world keeping the beat down and the improvisational experiments.

I started with Future Days then I worked my way back through Tago Mago and Ege Bamyasi. I’ve picked Unlimited Edition because it’s oddities but all brilliant – the buried treasure in effect! Can were having a revival at that time and another band I got into, Tortoise, were namechecking them, too. It was inevitable that they’d become a favourite, as have other Kraut-y things such as Achim Reichel’s Erholung which is very much in the Can vein and guitar playing that’s trancey and repetitive. When I started playing guitar I wanted to play an AC/DC riff, then a Pistols riff. Then I learned about echo pedals.

I’m a big fan of cinematic stuff and soundtracks. On a 60s tip there’s Beaver & Krause, who appeared on the soundtrack to Performance. Gandharva is the score for a non-existent film and they really push the experimentalism. It’s groovy, with Mike Bloomfield on bluesy-psychedelic guitar, but there’s also synth drone and classical, then it ends in a gospel hymn. How many records do that? None. But then there’s Joyride by Friendsound which freaks out one minute then does reflective soundtracky stuff the next. You’ve got seven minutes of kids in a playground, a lullaby, birdsong then some more freakout on side two. This is psychedelic rock at its most bonkers.

I’ve discovered loads of things from going into record shops and asking, ‘What are you playing?’ I love Rough Trade East and like to pop in for a chinwag with Nigel, see if he can recommend anything. Sam Kidel’s Disruptive Muzak was playing in there one day and I had to snap it up. The story is he recorded an ambient experimental piece, then telephoned lots of call centres – like the Jobcentre – and played the piece when they answered the phone. He then recorded him playing the recording down the phone, and people’s responses. You have to listen from start to finish. I find the effect of this record quite strange and bizarrely moving.

I’m going less for the 60s and 70s stuff these days and more for new things such as Cavern Of Anti-Matter and Hauschka. There’s so much out there – the quest never stops!”