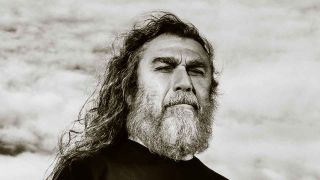 Tom Araya is one of metal’s most iconic figures. As vocalist and bassist with Slayer, he was there for the birth of thrash, then helped raise the bars with a series of classic albums that included Hell Awaits, Reign In Blood and South Of Heaven. Here, the Chilean-born Araya looks back over a life on metal’s frontlines.

“I was born on June 6, 1961 in Viña del Mar in Chile. Everybody seems to get the name of the place wrong for some reason. It’s a little town on the coast of Chile, where we lived until I was about four years old. I went back there a few years ago with my family so I could show them the country where I grew up with my brothers and sisters. Everybody was really cool, people didn’t really recognise me.”

Your family moved to Los Angeles in 1965. Was it a culture shock moving from a small town in Chile to a major city in California?

“Not so much for me, no. My older sister Jeanette remembers a lot of things that I don’t, because I was so young at the time, so I don’t remember much of the actual trip itself – but what I do remember very well is living in [Los Angeles suburb] South Gate. I wouldn’t call it a culture shock so much, but learning the English language was an issue, so we picked it up pretty quick. We had to in order to get by, but it didn’t take long to learn it, because we were so young at the time. The way we did it was our parents hired someone to come to our house and teach us English. He spoke a bit of Spanish with us in the lessons, but I remember that he spoke it in a very American way, which was really odd to hear. So yes, the language was a problem, but we learned English pretty quickly.”

There are pictures on the internet of you as a schoolkid, hanging out of a tree and generally being boisterous. Were you a hard-working student?

“Yeah, I was, to an extent. I did enough to get by at school, I guess. I wasn’t what you’d call an over-achiever, unless there was something going on in the classes that I really wanted to do. The picture that you’re talking about appeared in a school yearbook one year: I don’t know why, but the other kids voted me ‘Class Clown’. I don’t really understand it, because I was never really a clown, just a funny person like other funny people. It was really odd.”

Did you have a particularly musical family?

“No, funnily enough. There was no one who was musically inclined in my family. It was strange, now I come to think about it. It was actually my older sister who first learned how to play an instrument, and that inspired my younger brother [and later Slayer roadie] Johnny and me to pick up the guitar when we were old enough. Now my nieces and nephews are all musical, which is really cool.”

Your father was a deeply religious man. When did you find out that Slayer’s lyrics had made a negative impact on him?

“I didn’t. It wasn’t a problem, because he never spoke to me about it. In fact, I didn’t find out about any of that stuff until after he had passed away. But you know, I was really lucky because I had very supportive parents, just like Kerry [King, guitar], Dave [Lombardo, drums] and Jeff [Hanneman, guitar] did. That was very special for me and for the other guys in the band: we literally had every one of our parents at our first couple of shows that we played after Slayer first got together, which was really cool. They were all so supportive of what we were doing.”

Was there a point when you felt that Slayer had become a success?

“You know, that’s a difficult question for me, because I really don’t see this band the way most people do. It’s always a surprise to me when people ask me questions like that, even after all these years. I really don’t think of the band as this big thing – even though everybody else does. I do find myself in awe sometimes when that reality hits me, and I think, ‘Wow! Damn!’ – but I don’t really think about it that often. What’s weird is that me and my family can be out walking somewhere, and out of the blue someone will just walk right up to me and say, ‘I know who you are!’ and he’ll shake my hand and it’ll be cool. It’s happening more and more frequently these days, too, which is really surprising to me. It can happen in really obscure places as well: we can be in the middle of nowhere and it’ll happen. Then we’ll look at each other and we’ll be like, ‘What just happened?’ Ha Ha”

“Yeah, we used to do that stuff all the time. We stopped it when we were doing South Of Heaven [1988], or in that timeframe anyway. It was pretty stupid… it was real stupid. We just looked at each other one day and we were like, [exhausted voice] ‘We can’t be doing that shit anymore!’, so me and him made a pact that we’d quit.”

“That’s salt! A big line of salt. That picture was taken in Canada. A lot of stuff we did for a joke. Especially stuff like that, where people would see the picture and go ‘Oh my God! Oh no! That’s real!’ Ha ha! I remember the first time we played in Europe. Our last show on that first tour was supposed to be held at a place near Rotterdam, somewhere in Holland. That show had got moved three times though, so we figured that no one was going to show up. When we drove up to the place, the venue we were playing at was just a little hall – it was some kind of community hall for I don’t know what. I remember looking at that place and thinking, ‘You know what? Nobody’s gonna find this place’. So we got ripped! We got so fuckin’ wasted thinking, ‘Hey, they won’t show, let’s get fucked up. After all, it took us forever to get here, no one else is gonna come…’ But in the end the place was packed. Packed! We were so fucked up that day… Somehow the gig actually turned out OK, but we looked at each other right after the show and said, ‘We’re never gonna do that again. No more fuckin’ off, or getting fucked up, before a performance.’ Afterwards we were like, ‘That was so stupid – what were we doing?’ I suppose we were smart enough to think about what we’d done, at least, and change our ways.”

You’ve written several songs about serial killers. Why is the subject so interesting?

“It’s just fascinating to me how people can do such things to each other. My younger brother Johnny was reading a book one time about [1930s mass murderer] Albert Fish, and he said, ‘Man, you should read this, it’s really interesting,’ so I borrowed it from him and read it. I was like, ‘Wow!’ Then I happened to be in a book store another time, and I came across a book called Deviant: The Shocking True Story Of Ed Gein – and I think it was the first printing of the book, because it had all these gruesome photos in it of what Gein had done to his victims that they omitted from the later editions. I read it and I thought it was really interesting. Then, as I got into it a bit more, our fans started giving me books and saying, ‘You should read this!’ which was very cool of them. One book, which I found was a real parallel to the one about Jeffrey Dahmer, was the one about Dennis Nilsen. It’s so weird how their stories ran in parallel. That was the book that inspired the song 213 [on Divine Intervention, 1994], and when Dahmer hit the news I thought, ‘I have a lot of stuff to work with here!’ And then somebody got me into ‘couple murders’, where the wife or the girlfriend helps the murderer: there’s a few couples like that that I’ve read about. You’ll be familiar with one of them: Rose and Fred West. There’s a Canadian couple who did that stuff too.”

You had back surgery at one point. How did that affect you?

“I went in and came out and I felt fine. The surgery was actually in my neck, although it’s part of my back. They went through the front of the neck, moved the oesophagus and all that stuff out of the way, attached a plate onto the front of the neck bones and then put everything back. There are six screws in there [shows Hammer X-ray of pins in his neck on iPhone]. Afterwards I had a big lump there which disintegrated: I guess my body absorbed everything, although I still feel like I’ve got shit in my throat.”

In Slayer live shows, it always looks like you really want to headband but hold back because you don’t want to injure your neck again.