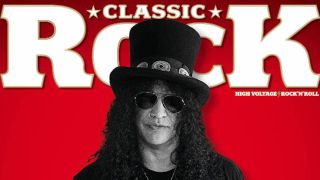 Slash stars on the cover of the latest issue of Classic Rock magazine, onsale now, with an exclusive interview in which he talks about healing wounds with Axl Rose, being a dad when you’ve been a fairly terrible/irresponsible role model for much of your life, the last days of Lemmy, why #metoo is much needed, writing new songs for Guns N’ Roses, his incredibly smutty Instagram account and more.

FISH
The big man explains why he is enjoying bringing his illustrious music career to an end and looks at what his future might hold.

THE CLASH
A cancelled gig, rioting, fights… How the reality of life on Belfast’s mean streets proved to be too hard-hitting for the band’s urban guerilla posturing.

THE STORY BEHIND THE BEATLES' HELTER SKELTER
“All I wanted to do was make a very loud, raunchy rock’n’roll record..."

BROTHERS OSBOURNE
Resilience, hard work, determination and good ol’-fashioned true grit has got the country rock duo where they are today.

THE MAGPIE SALUTE
Former Black Crowes guitarist Rich Robinson’s band are determined not to let the things that brought down the Crowes clip their wings too.

SUPERSONIC BLUES MACHINE
The fluid line-up of A-listers and heavyweight musos, who’re taking the blues where it has never set foot before.

PLUS: Clutch, Paradise Lost, Rick Wakeman, Vodun, a sneak peek at the new Queen book, never-before-published photos from the 60s and 70s, the guy who's been collecting rock-star signatures for 40 years, and much more.

Issue 253 of Classic Rock is on sale now at all good newsagents, and available to buy online.