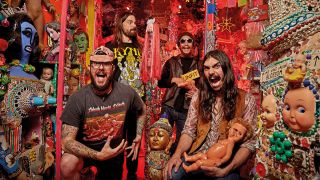 A giggling, hairy embodiment of marijuana, heavy metal and fantasy fiction, Crobot seem like any group of cheerfully immature geeks. That is until you hear them play. Since forming in 2011, they’ve mastered an explosive blend of classic rock, metal and funky sensibilities, with electrifying gigs to match. So it seemed appropriate to photograph them at London art installation House Of Dreams – a place with similarly explosive, trippy qualities.

“I think with our new material we’re definitely stretching the ends of the spectrum,” says vocalist Brandon Yeagley, a softly-spoken guy compared to his hair-helicoptering on stage persona.

“We’re about seventy-five per cent pot,” deadpans Tennessee-born guitarist Chris Bishop. “But it’s adrenaline equally, because we love the music.”

Crobot have embraced all shades of rock.

Co-founded by Yeagley and Bishop, Crobot began with their families’ classic rock records, before moving on to metal.

“I wanted to play fast,” Bishop explains. “I tried all the [Dimebag Darrell, who played guitar with Pantera and Damageplan] and Metallica stuff, and loved Killswitch and metalcore when that came out. As those trains sort of died, I ended up going back to the stuff I originally learned, bands like Clutch and Led Zeppelin.”

“There was Led Zeppelin and Deep Purple and Black Sabbath, of course,” says Yeagley, “but my dad was really into Dio too, so I grew up listening to that, and also to bands like Uriah Heep and Orange Goblin.”

They get hurt a lot.

At the age of 15, Yeagley – a sporty teenager – was hit by a truck. “That pretty much ended my sports life,” the vocalist says. “So I sat in my room and learned to play guitar. I have a titanium rod in my leg still. It’s my robot leg.”

Not that it hinders them today. Crobot gigs are ferocious affairs, with mammoth grooves, propulsive riffs and a lot of flying guitars. Bloodshed and hilarity ensue.

“I smashed my face open with my bass one time,” hyperactive bassist Jake Figueroa says, nodding, to peals of laughter. “Blood was just pouring down.”

“I smashed Brandon in the head with my headstock at one of our early gigs,” Bishop recalls. “It’s never on purpose though.”

Sci-fi is important to them.

Yeagley has made their 2014 debut, Something Supernatural, into a comic, and for Welcome To Fat City he drew from the likes of Hunter S Thompson and Douglas Adams.

“When we were writing the song Welcome To Fat City I was digging into [Thompson’s] The Rum Diaries,” Yeagley says, “and watching some Hunter S Thompson documentaries. His debauchery was just fascinating.

“And Dio is a huge one for lyrics. I try to keep some sort of mystic quality in the stories. And I’m a huge fan of Neil Fallon from Clutch. That guy can tell a story no matter how weird or wacky it is. And Josh Homme from Queens Of The Stone Age. He’s clever as fuck.”

For all their heavy Purple/Zeppelin/Sabbath influences, Crobot pack in a lot of funk, inspired by the likes of George Clinton and Funkadelic. Yeagley even has a picture of James Brown tattooed on his ‘good foot’.

“That’s what makes chicks dance,” Figueroa says of the funk. “It’s a big one for us.”

“Things are getting funkier,” reckons Yeagley (who often opens shows with “Let’s get funky y’all!”), “and sludgier and heavier at the same time.”

“Even the real macho heavy guys,” says Bishop. “We can disguise the Funkadelic-y stuff through what we do, so they don’t realise how much they like it. From the beginning of this group, it was nothing but metal bands who we were put with. And they loved us! We’re very lucky to be able to cross over into different genres.”

They do a mean Total Eclipse Of The Heart.

“After a show in Hamburg we got together with the guys in [sludge metal band] Black Tusk and did a karaoke Total Eclipse Of The Heart,” Figueroa laughs. “There were seven-part harmonies.”

“We were in this really nice karaoke bar. The girl before us was singing Britney Spears. We’d been on tour a long time…” Bishop adds.

Crobot issue Not For Sale stream