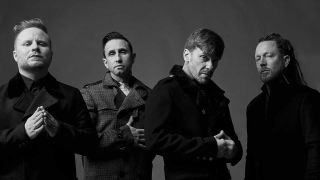 "Attention attention is a story album," says frontman Brent Smith. "It's not a concept record, but it is one full story. There's a beginning, a middle, and a finale."

It's quite some story. A deeply personal collection of songs, Attention Attention charts the life of an individual protagonist from excruciating lows to searing highs. Not always a comfortable listen, it follows their progress as they face their demons, overcome their fears, learn to trust, and finally face the world.

And it's got a thing or two to say about the shallow, murky trench of social media, where everyone has an opinion yet very little of what they have to say is understanding, supportive or positive.

Below, Smith guides us through the album.

Shinedown are currently touring the US. The band will play Download Festival on June 10, before returning to the US for a co-headlining tour with Godsmack in July. "It’s all about impact, and making a statement," says Smith. "We are creating a show for the fans that is powerful, passionate, and sonically inspiring."

"We wanted to have a starting point, because the entire record takes place within this one room. So you start the album, and you hear this pulsating rhythm like a machine in the background. You hear a knock on the door, you hear the door open, you hear a person go inside and close the door. The audio changes a bit, you hear the person walk forward, pull up a chair and sit down. They take a deep breath and exhale, and then Devil starts."

"This is a song about utter, shear fear: just being terrified – not only of yourself, but of what's outside – but understanding that you're making the decision to flush these feelings and emotions out. You've got to start to figure out who you are, and what you're capable of. This is the beginning of the story, and it's the very bottom for the person in the story."

"The person has got to a place where they're like, 'OK. This is where I'm at. This is where it's starting.' They're freaked out, but all of a sudden they've got to start asking questions. It opens with, 'Who's the victim now/Stand up and take a bow/Face right, face left, face everyone you disrespect/So who's the asshole now?' It's the part of the record where the person starts to put things together."

"Attention Attention is a warning. It's like your alter ego jumps into the room all of a sudden, and starts messing you with you and pushing you around a little bit. And then you start going into the psychological part of the song. It's the other dimension of the individual, where the other side of them is going, 'Nothing about me is ordinary/My friends all say I'm going crazy/I don't hear a word that they say/Because the voices in my head are legendary/But I'll never tell them where the bodies are buried/It keeps them coming back every day.'"

"Kill Your conscience is about that dynamic where you're looking at your smartphone 23 hours a day, and everyone has an opinion, and everyone says what they need to say... often without thinking before they speak. When I walk around I see a lot of people with their heads down. I see a lot of people with the thumbs moving all the time, and there's a real lack of looking somebody in the eye and having an actual physical conversation with them. Kill Your Conscience is the song about what's out there. To the person inside the building it just seems like nobody cares: if somebody says something positive, there's 25 negative things, just because people need to hear their own voices."

"The story moves into this person's DNA, because it's about their upbringing. Pyro is the part of the story where the person is going, 'how did I get like this? How am I wired? My parents? My mother? My father? My background? Where did this come from?' Some people that have heard the song, where 'my mum's a burnout, my dad's a pyro', and asked what it's about about. Personally, my dad was one of my main teachers, one of my main mentors. He's everything to me. He taught me a lot, He taught me how to be a man, and he taught be how to be a gentleman. But the fact is he had a ferocious temper. He could be on fire just like that. So that's what being a pyro is about. And my mum was not a burnout in the sense that the listener might expect, but people would burn her out. People would just work her and work her and work her. She's such an incredible woman, because she would go without for weeks at a time just to make sure that me and my dad didn't.

"Everyone who knows a bit of my background with regard to substance abuse and alcoholism knows that I've battled with it. It's something I deal with on a daily basis. I've always been very honest about it, which is that I didn't do drugs today – and I didn't drink today – but I don't know what I'll do tomorrow, because I literally have to take it day by day. I never went to rehab, I didn't do a 12-step programme, and I don't talk about sobriety unless I'm asked about it. Even then, I don't spend much time on it because I literally live my life day by day. That's how I have to do it, but the dynamic in the song is not just about substance abuse. It's about a lot of different situations that people get put in because they have things in their mind that – for whatever reason – they used to sabotage themselves. They don't know why they do it, but they do it, and these are the monsters that I'm talking about: those voices that say, 'I know this is going to be really fucked up after it's over with, but let's do it anyway.' That's the sentiment in the song, when I sing that my monsters are real and they're trained to kill."

"The other thing is that there's a statement made in there – not from a biblical or a spiritual standpoint – about God, when you go into the bridge. The bridge is very very important in this song, because it brings back some of the lyrics you've heard already. It says 'Leave your weapon on the table/Wrapped in burlap, barely able/Call a doctor, say a prayer/Choose a God you think is fair.'"

"Darkside is where the person starts to hallucinate a little bit. They've been in this room. You have to envision them really tired, kind of breathing heavily, sweating, then all of a sudden these characters start popping up. It's almost like you're walking these corridors, like you're walking into Las Vegas in that scene in Fear and Loathing in Las Vegas, and everyone turns into lizards! There's a very profound statement in this song too: 'The symptoms are contagious, so please be advised/Welcome to the dark side.'"

"This is where the shift happens. The person has stopped the hallucinations, and they've come back to themselves, and they start thinking about the people outside: their friends, their family, themselves. And they really start to think about the people who mean the most of them, and understanding that there are people out there who genuinely do love and respect them and are there for them. This is the complete opposite of self-sabotage. This is understanding, and acceptance, and nurturing, and also not being afraid of who you are. Take a deep breath, you don't have to be on 11 every single second of the day. You've got to think about the good stuff. Don't fixate on the negative."

"Evolve is an extension of Creatures. In this song of particular I had to take leave of my senses to draw my own conclusion. I had to swing for the fences.  We needed to build up the tension in the record here too, to really give this person their confidence back."

"One of the quintessential songs on the record. I wrote the lyrics to Get Up about Eric [bass player Eric Bass], who produced and mixed the record. Eric faces is what is considered to be clinical depression on a daily basis. Some days everything is great, some days the sky is falling in. Often he'll tell me he wishes he could unscrew part of his skull, reach into his brain and take that part of him out and throw it away. But it is a part of him, and he has to work with it. He doesn't have to like it, but he has to respect it. And as a band we all respect him because of it. It was one of the songs that took the longest to write because I was afraid what Eric was going to think. So this is the part of the record when a person has to have a heart-to-heart chat with themselves in that chair. It's a very conversational piece."

"This song carries a lot of weight. It's not a warning, and it's not a holier-than-thou statement either. It's an example of how we're all the same on a lot of different levels. We're all cut from the same cloth. You have to remember how to be a human being: to make the gesture of asking someone how they're doing today, and genuinely wanting to know the answer. It comes back to the modern day, and the fact that everyone has an opinion, everyone has to make statements, and some people just want to hear the sound of the own voices. But they're not special, and nor am I: I'm putting it back on myself too. There's a bigger statement being made in this song then what your first initial reaction might suggest. Maybe, after you hear the song, take stock of yourself... and be kind."

"One of my favourite songs on the record. I love the fact that after finishing three records with a ballad or a mid-tempo song, we finished with quite possibly one of the most incendiary tracks on the record. The song is self-explanatory. It's the finale: It's my day to be brilliant. It comes back around to that bridge, where it says, 'As the world collides and I fight for air/As I crash and burn like I just don't care.' It's saying I might fail, but I not going to not try. I'm going to go for it. I might fail, but I'm going to get back up and I'm going to try again.

Attention Attention is out now.