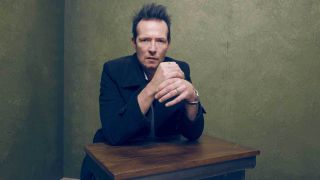 In his 30-year career, Scott Weiland went from grunge whipping boy to one of rock’n’roll’s most charismatic, if troubled, stars. Whether fronting multi-platinum San Diego alt-rockers Stone Temple Pilots, teaming up with the Guns N’ Roses members who weren’t Axl Rose in Velvet Revolver, or ploughing an entertainingly eccentric solo furrow, it’s testament to his talents that his music was never quite overshadowed by his headline-grabbing battles with drug and alcohol addiction, nor his death which tragically followed them in 2015.

Born in San Jose in 1967, as a child Weiland bounced between California and Ohio. It was as a teenager in San Diego that he channelled his obsession with British new wave music into his first band, Soi-Disant, before an epiphany at a Black Flag concert in 1986 turned him on to US punk. Shortly afterwards he met bassist and kindred spirit Robert DeLeo. The pair formed Mighty Joe Young, bringing in DeLeo’s guitarist brother Dean and drummer Eric Kretz. In 1990 Mighty Joe Young signed to Atlantic. A year later they changed their name to Stone Temple Pilots.

Initially written off as bandwagon jumpers, STP evolved into one of the great rock bands of the era. Their multi-textured, occasionally psychedelic anthems showcased an arena-sized ambition that none of their peers had, resulting in a string of huge-selling albums. But Weiland also developed a parallel career as a hopeless drug addict, which saw several albums and tours plagued by assorted drug busts and incarceration. His excesses contributed to the dissolution of STP in 2002.

Personal and musical salvation came in the unlikely form of Velvet Revolver, the supergroup formed by former GN’R men Slash, Duff McKagan and Matt Sorum. A group of like-minded recovering addicts with a point to prove, they recorded two albums that were among the most successful hard rock records of the early 2000s. But a combination of ego, paranoia and pharmaceutical relapses inevitably got in the way, and they split in 2008.

Here, we celebrate the best of Weiland’s work, and provide a handy guide for those just discovering his career of where to get started first.

Released a year after Nirvana’s Nevermind kicked open the door for grunge to pour through, STP’s debut distilled everything that was innovative and exciting about this new musical movement into a more commercial, instantly digestible format. Sex Type Thing and Crackerman may have echoed what was happening in Seattle, but the likes of Plush, Creep and the jazzish Naked made it clear that here was a band who weren’t planning on spending the rest of their days playing minor chords at maximum volume.

The critics hated it and came down on the band like a ton of bricks, but that didn’t prevent it from selling millions of copies.

Weiland’s substance abuse problems began to surface on STP’s second album, right down to the fact that they recorded it at a mansion in Atlanta in homage to the Rolling Stones’ Exile On Main St. Apparently the drugs did work at this point, giving the singer the confidence to experiment with left-field rhythms and acoustic material.

The band themselves demonstrated their growing ambition on the country-tinged Interstate Love Song and the muscular pop-metal of Silvergun Superman, both of which deviated from the grunge blueprint – although Meat Plow and Vasoline kept a boot in that camp.

Riding high on the phenomenal success of their first two albums, STP again locked themselves away in a mansion, and set about deconstructing their sound. The moody vocals are still present, but they’re juxtaposed with smooth Latin rhythms and smoky jazz of And So I Know and the bizarrely baroque Lady Picture Show, the latter a head-on collision between Ziggy Stardust and Eleanor Rigby. Weiland’s stream-of-consciousness lyrics may well have been inspired by his penchant for intravenous speedball binges.

After a temporary hiatus when Weiland recorded a solo album (12 Bar Blues) and his bandmates put together a new band, Talk Show, with singer Dave Coutts, STP returned with an album that found them re-energised and tougher than ever before. The twisted metal thunder of Down and No Way Out found the band flexing their muscles, built on the sort steely riffs that would give James Hetfield a run for his money, though the sturm und drang was tempered by the upbeat jangle-pop of I Got You and the ethereal majesty of Glide. The album was a fine way to end what had been a chaotic decade.

Things were going from bad to worse in Weiland’s world by the turn of the millennium, with yet more drug busts, rehab stints and cancelled shows. Despite this, STP still managed to get it together to make what is one of their best records.

Initially planned as a double album, Shangri-La… – a blatantly tongue-in-cheek title – was an adventurous, surprisingly upbeat collection. The band are at their most visceral on Dumb Love and Coma, while the Lennon-esque Song For The Sleeping is possibly the most beautiful thing Weiland has ever written.

It was Slash who offered Weiland the lifeline of joining Velvet Revolver when the singer was at an all-time low. The guitarist’s former Guns N’ Roses bandmates Duff McKagan and Matt Sorum were already in place, but when an initially ambivalent Weiland came on board he immediately raised the game. Slither and Set Me Free (hurriedly written for the Hulk soundtrack) made the mosh pits explode while Fall To Pieces gave them their very own Sweet Child O’Mine moment: a lighters-aloft anthem, complete with melodic bassline and skyscraping solo. As muscular and wiry as a featherweight boxer – or Weiland himself. The singer was back.

Given a rave review by CR on its release but a lukewarm reception elsewhere, Libertad is a surprisingly strong set. Weiland’s personal life was unravelling – his mother was stricken with cancer, his grandfather contracted emphysema, and his brother Michael, a fellow addict, fatally OD’d. The singer’s pain is laid bare on For A Brother, Gravedancer and Pills, Demons & Etc, while tracks like Let It Roll and She Builds Quick Machines smoulder and spark. The spell is broken only with an execrable version of ELO’s Can’t Get You Out Of My Head, which demonstrates a self-destructive streak that would ultimately contribute to their downfall less than a year later.

Given that Stone Temple Pilots’ original run ended in 2002 with a backstage punch-up between Weiland and Dean DeLeo, their reunion in 2008 was a surprise. But it clearly fired them up, apparently writing enough material for a double album.

Produced by the DeLeo brothers with help from Don Was, their comeback record found STP displaying all their individual influences, from the Stones to the Sex Pistols. A revitalised Weiland relished the new-found freedom to express himself both vocally and lyrically, not least on Between The Lines, with its cheeky drug references.

12 Bar Blues, Weiland’s debut solo album in 1997, was a hit-and-miss affair, with the singer unable to decide whether he wanted to be David Bowie or Tom Waits, and falling between the two. This belated follow-up was both more confident and more introspective.

Inspired by his volatile relationship with his ex-wife/muse Mary Forsberg, as well as his brother’s death, it jumps from the grand opener Missing Cleveland to the stripped down, Dylan-esque Tangle With Your Mind. His Anglophile influences were given free rein on covers of David Bowie’s Fame and The Smiths’ Reel Around The Fountain. A cathartic success.

Covers albums are rarely any good, and Weiland’s upholds this ignoble tradition. At its best – on his versions of the Stones’ Dead Flowers, Bowie’s Jean Genie, The Flaming Lips’ Waiting For A Superman – it sounds like a passable night in a karaoke bar.

At its worst it’s embarrassing – Weiland sounds like he’s under the influence of elephant tranquilisers on the New York Dolls’ Personality Crisis, while an ill-advised attempt at a Northern accent on The Stone Roses’ I Am The Resurrection is possibly the worst idea he’s ever had. Which, given past misdemeanours, is some achievement.

At War With The World (And Themselves): The Story of Stone Temple Pilots

The Downward Spiral: How Scott Weiland And Velvet Revolver Fell To Pieces

Tributes pour in for Scott Weiland