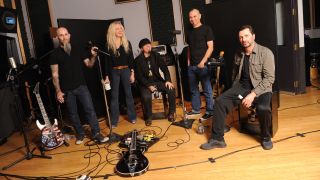 Scott Ian and his wife Pearl Aday have teamed up with former Mother Superior guitarist Jim Wilson, Armored Saint/Fates Warning bassist Joey Vera and The Cult drummer John Tempesta. Together, they’re Motor Sister and have recorded an album featuring covers of Wilson’s band. We caught up with Scott and Pearl to find out how this supergroup came to be…

**WHEN DID YOU FIRST GET INTO MOTHER SUPERIOR? **Scott: “I first became aware of them because they became the Rollins Band on [2000 album] Get Some Go Again. There was obviously a noticeable difference in sound for Henry with that one – all of a sudden he sounded like he was in a rock band, like a Thin Lizzy, AC/DC vibe. I found out he changed his band and now they were these guys from LA called Mother Superior. I love rock music, and nobody was making music like that in the late 90s. I hadn’t heard any original rock music like that in a long time. Not only the Rollins Band record, I went out and got all their records.”

WHOSE IDEA WAS IT TO DO THE MOTOR SISTER ALBUM, THEN? Scott: “For my 50th birthday last year I had this idea that we could resurrect Mother Superior, because they’d been broken up for seven or eight years at that point. We’re friends with Jim, we hang out all the time. Jim and Paul have been playing music together for years, I’ve been playing music with Jim for years. Joey Vera and John Tempesta? We’ve all been hanging out and jamming forever. I had this idea… ‘What if we all get together and played a set of a Mother Superior songs in my house as a birthday present to myself?’. I expressed that to Pearl and she made it happen!”

**WHAT’S JIM WILSON LIKE TO WORK WITH? **Pearl: “I teamed up with Jim a long time ago to start my solo project, and we love working with him. We are just on the same wave length, Jim is a complete lover of music. He knows everything about everything I want to know about. It’s easy and it works, and the music that comes out of every time we get together is really great and gets a really good reaction out of the people that hear it.”

**SO WHAT WAS IT LIKE WORKING ON THIS AS A MARRIED COUPLE? **Pearl: “It’s fun, Scott has been playing in my band for a few years now, so it’s not new to us to work together. The good thing is that we know we work well together, which I guess is not common amongst married couples. That’s what they tell me, I wouldn’t know because I work very well with my husband and we have a great time.” Scott: “It’s easy, I love getting to be in a band with my wife.” WHAT CAN WE EXPECT FROM THE ALBUM? Scott: “There’s nothing trendy or contrived, Mother Superior were just a kick-ass rock band. We’ve taken Jim’s songs and muscled it up a little bit, now it’s two guitars, and added Pearl on vocals, John’s drumming and Joey’s bass playing. These are just twelve great rock songs played really well. Do I think Mother Superior were underrated? It’s pretty much the reason we did this. We’ve all known the secret for years, so hopefully now more people will now about it. If you like good music, you should have a really great experience listening to this album.”

Motor Sister’s debut album Ride will be released on March 9 through Metal Blade. To read more about married couples who’ve made sweet music together, click here.