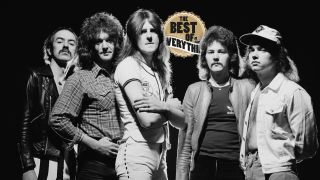 Saxon formed in Barnsley in 1976. During the last four decades, the band have released 20 studio albums and have influenced bands like Metallica, Megadeth, Mötley Crüe and Pantera.

We challenged vocalist Biff Byford to pick the 10 best songs from the Yorkshire quintet’s huge back catalogue.

This is what he selected…

STALLIONS OF THE HIGHWAY (Saxon, 1979) “There were a couple of songs from our debut album that stick out. This is one of them. Stallions Of The Highway is really about the band finding our sound and style. It showed how things were beginning to work for us. We were getting our focus and direction sorted.”

747 (STRANGERS IN THE NIGHT) (Wheels Of Steel, 1980) “Well, it wasn’t the first single from the Wheels Of Steel album – that was the title track – but it was the one that got us noticed. This was the track that proved we could write a heavy song with a clear melody. It was also one of the first songs to put NWOBHM on the radio, which was important for us and also for the genre.”

HEAVY METAL THUNDER (Strong Arm Of The Law, 1980) “This one means a lot to me, because we wrote it about the fans. Actually, I wanted it to be title of the album, but I got outvoted and it ended up being Strong Arm Of The Law, of course. I know Heavy Metal Thunder meant a lot to bands who were just starting out at the time, like Metallica. So, this was very influential to some of biggest movers on the thrash scene.”

PRINCESS OF THE NIGHT (Denim And Leather, 1981) “Another song that underlined our ability to mix a huge riff with a strong tune. It was a very big track for us, and I like the title which just popped out. Because it could mean a steam train, or else a female! It sticks out on the Denim And Leather album for me.”

POWER AND THE GLORY (Power & The Glory, 1983) “The title track of our fifth studio album, again it’s the simplicity that cuts through. By now we completely understood how to mix up a powerful riff with an anthemic tune. It’s one of those songs that comes over so well onstage.”

CRUSADER (Crusader, 1984) “These days, it’s seen as a controversial song, because it’s all about a young lad who wants to go off to war with the soldiers. But it’s always been awesome when we play it live, so it means a lot to me.”

BACK ON THE STREETS (Innocence Is No Excuse,1985) “OK, I admit it. The reason I like this one so much is because of the girl in the video. Ha, ha. Yes, that’s shallow, but what’s wrong with that sometimes? This was a single from the _Innocence Is No Excuse _album, and it also has a lot of musical merit.”

LIONHEART (Lionheart, 2004) “The title song of our 2004 album, when we got back to writing songs which work well live. I think there was a period in the 90s when we lost sight of what makes a song come across onstage. But here we finally returned to that basic idea. It also marked a time when both the media and the fans looked favourably on us again. We’d turned a corner. And what’s wrong with writing a song about a revered English king?”

STATE OF GRACE (The Inner Sanctum, 2007) “This was the opening track, although I have to admit that wasn’t my choice to start the album. I would have gone for Atilla The Hun, but again was outvoted. What I like about the song is the way it deals with the construction of cathedrals in the Middle Ages, from the viewpoint of the builders and the stone masons – the people who actually worked on these magnificent buildings.”

SACRIFICE (Sacrifice, 2013) “The title song of our last album and it’s got what people might term a classic Saxon approach. It has a heavy riff, but a very catchy melody. Something we’ve been doing now for a long time. It proves we’ve lost none of our ability to write and perform an anthem. And like so much of our material, what matters is that it comes across well when we play it live. In the end that’s the crucial thing about a Saxon song – does the audience like it?”

The Story Behind The Song: Saxon's And The Bands Played On