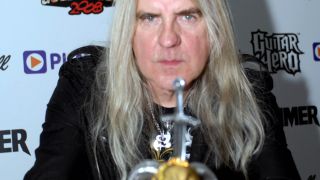 With a recording career that has lasted almost 30 years and has seen a number of line-up changes along the way, Saxon are established rock'n'roll veterans. But they're not resting on their laurels. Being vanguard bearers of NWOBHM, Saxon seemed destined for a lofty career alongside peers like Iron Maiden and Def Leppard. But with the departure of original members Graham Oliver (guitar) and Steve ‘Dobby’ Dawson (bass) and the advent of grunge in the 90s, the band spent almost a decade in relative obscurity, branded ‘unfashionable’.

What was your approach to recording Into The Labyrinth?

It was back to songs that people will like; well, what we like first. We’re trying to stay within our style rather than experiment. We want to produce something that’s entertaining. We’re a bit more into atmospherics now. In the 80s we had a more face-melting element. I actually think we’re into a more aggressive 80s style, rather than being too radio-friendly.

Saxon weren’t an 80s band in the same way as the likes of Ratt, Poison or Bon Jovi.

Yeah, I can see what you mean. I think bands like Saxon and Maiden were a little more punk-oriented. We were a cross between AC/DC and the Sex Pistols, with a little bit of Deep Purple and Led Zeppelin thrown in; we were influenced by the 70s. We did turn into a bit of a hair band in the late 80s, but I think we’ve gone back to a more no-make up, full-on rock’n’roll band.

It must be a relief not having to wear spandex tights any more. In your book you said that that you had to gaffer tape your testicles to keep them in. That sounds painful.

Actually I’m still gaffering my testicles, because I split my leather pants in Newcastle and the band have bet me that I can’t keep them on all the way to Hammersmith.

You once said that the name Saxon was more of a curse than a blessing.

In the early days we were always ear-marked as being idiotic, sword-wielding fools – and that’s not a bad thing. I think our music now connects more with the name. But when your music’s not popular your name has those Spinal Tap connotations; the piss-taking part of heavy metal. I think in the 90s it was all a bit of a joke.

How did you get involved in that TV reality show with promoter Harvey Goldsmith?

They asked us to do this documentary thing, and it obviously turned out different. I think it was the right decision. I think we managed to control it quite well. But I wasn’t really impressed with the advice he was giving us about stylists and hair etc. Change your image for a younger audience? We have quite a young audience anyway, and the last thing young fucking kids want is some fucking 80s fucking band looking like fucking teenagers!

It’s been announced recently on the Oliver/Dawson website that the battle over the Saxon name has finally been sorted out.

It’s been resolved for quite a long time. I think they’re moving towards calling themselves Son Of A Bitch; it’s only taken them 16 years. I think they would like to get to a point where we could play together again. Whether that will happen, I don’t know.

**Graham Oliver and Steve Dawson are planning to write a book. Does that bother you? **

No. Whether it’s a book of truth or lies, we’ll have to see. In my book I was quite fair. I never said who was shagging who, apart from me, because they were all married at the time. I was quite nice to them. I like to tell the truth, it’s much easier that way.

In your book you say the split saved Saxon from coming to the end of the road.

That’s right. It was getting pretty bad by the time that Graham Oliver got sacked. When there’s no chemistry, the band can’t survive. When it goes from being competitive and on the edge to you can’t even stand being in the same room with the person, it has to stop. You wouldn’t stay with a woman like that.

Your biography should be made essential reading for new bands; it’s basically a guide to what not to do.

I went out to dinner with Iron Maiden’s manager, Rod Smallwood, and he said all our managers were wankers. For Rod to say that is something, because he is one of the best managers in the world and we were Maiden’s competition in the early days. In fact for quite a while we were bigger.

So what went wrong?

We just rolled along with everything. We were a gullible bunch of naïve fuckers, really.

How do you feel about where you are at in your career now?

We’re at a great point again. We’re going to try and not make the same mistakes again and not get too arrogant. When you’re at the start of your career you tend to get music, sex and adulation all mixed up and get a little bit self-important. You think it’s all your abilities, your sexual prowess, and you don’t realise that every fucking band goes through it. We certainly got carried away with it.