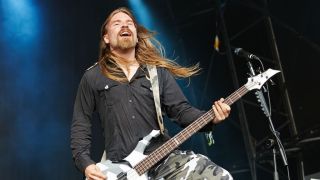 If 2016 felt like an exceptionally hard boot in the ass for many music fans, Sabaton’s roaring legions are ending the year on a high note. With the impending release of their eighth studio campaign, The Last Stand, the Swedish power metallers have just wrapped up a massive North and South American tour and are gearing up for an unrelenting assault through the heart of Europe. With a blood-pumping, hyperkinetic live show that boasts flamethrowers, pyro and gigantic fucking tanks, Sabaton remain one of European metal’s biggest draws. We sat down with bassist and co-founder Pär Sundström to talk about the new record, Sabaton’s plans for the year and how they choose their battles – literally.

Joakim Brodén (singer) has told us that this is the band’s most diverse record ever. How differently did you approach writing The Last Stand?

It’s true that new album sounds much different from the old albums. Joakim’s always been the main musical guy behind Sabaton. For the most part of our career, Joakim was pretty much running the whole show and telling everybody exactly how it went. “This is how I wrote the drums, so this is how you play the drums. This is how I wrote the guitar so the guitar needs to be played exactly like this, note-for-note.” That’s how we worked in the band for years. But when it came to The Last Stand, every band member had much more freedom. I think Joakim felt much more comfortable trusting that the guys in the band now might have some good ideas. It’s still Joakim as the main songwriter, along with Peter Tägtgren, our producer, but this has definitely helped to make the new album sound both fresh and interesting.

On the new album you focus on the bloodiest last stands in history. Where’d you find your inspiration for these battles?

When we decided to do the new album, there were a couple of ideas that immediately popped into our head, like the song Sparta. We knew we couldn’t ignore it, even though it’s pretty obvious. Another obvious one was Shiroyama – the last stand of the samurai known as the Battle of Shiroyama. To make sure we didn’t miss anything too obvious, we did a web search on famous last stands and we found some more things we hadn’t heard of before, like the battle that became the title track of the album. We literally found that by Googling ‘Famous Last Stands’. Also, our fans email a lot of ideas to us and they’ve been doing so for many years.

Fans email you ideas? How does that work?

Because I’m in charge of the band’s email, I get a lot of these and I save every good idea into my own library of ideas and I file them away for future projects. I probably have ideas saved for a couple of future albums in that file. I’m sure people who read this might send me emails over the coming months and emails and say, “Hey, maybe you should write a song about this.” This is the way we get most of our information, because obviously there’s no way for us to sit back at home and suddenly know everything that’s happening in the entire world. We love hearing the stories from the people in different regions around the world.

We’ve just wrapped up a nine-week American tour in both North and South America, which was very successful and now we’re taking it over to Europe, starting in Russia for three weeks. Then we’re doing our annual Sabaton cruise, which we’ve been doing for five years. After that it’s time for a quick Christmas break before the main European run starts – three months, 54 shows in arenas in pretty much every country in Europe. After that we go back to America for another tour. Then it’s summertime and we won’t be sitting idle because a lot of festivals have already shown interest in Sabaton and most of the days now is spent figuring out where we’re going to be in the summer. So I know what we’re doing through the end of next summer and after that, there’s an endless sea of opportunities.