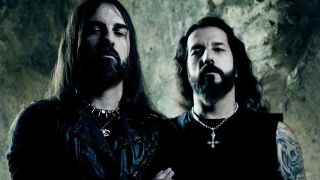 A new book from Metal Hammer writer Dayal Patterson chronicles the 30+ year history of Greek extreme metallers Rotting Christ. Through exclusive interviews with brothers Sakis and Themis Tolis amongst other key figures in the band's story, Non Serviam: The Official Story Of Rotting Christ tells the real story behind the seminal black metallers.

In the excerpt below, Sakis and Themis discuss the formation of Rotting Christ and their relationship with the underground punk scene in Athens.

Understanding the social climate in Athens during the 80s is essential to fully understand where Rotting Christ were coming from when they formed and the impact this background has left on the members’ characters. Unlike almost every other early black metal band, the band’s roots were embedded in punk, hardcore and grindcore culture as much as they were in black, death or thrash metal. Not unlike British extreme metal bands such as Carcass and Napalm Death, who grew directly out of the ideologically-loaded punk scene of the early 80s, Rotting Christ’s members were part of a highly political section of society, a section that actually had their own base in the city.

The connection between the neighbourhood of Exarcheia and social and political activism is no secret – at the time of writing, its Wikipedia entry mentions in its introduction that the region is “famous as a home for Greek anarchists” and “renowned for being Athen’s historical core of radical political and intellectual activism”. It is the location where the Athens Polytechnic uprising took place in late 1973 and where 15-year-old student Alexandros Grigoropoulos was killed by police in 2008, sparking huge riots throughout Greece.

Sakis: “Exarcheia was where anarchists and squatters lived, and still live today, and all the fights with police would happen there. There were always riots there and people would throw Molotov cocktails  at the police just to have some trouble – and still do this actually – because the police were very extreme and aggressive and especially against any kind of people that looked like us. It’s not like that today, but back then it was a very serious issue.”

“In the late 80s we began to spend more and more time with a group  of people who would meet in Exarcheia Square. They were what you would probably call crust punks, something like this. I liked very much the punk attitude and attended a lot of punk shows with the bands that were coming here in the 80s. Our interests were still quite chaotic – when something is born you don’t have a clear identity, you find this slowly, and we were into black metal, death metal, grind and punk at that time. We found a bigger crowd and created our own community, an underground community. I was like 14 years old, Themis was 12 and Jim was maybe 15 – we were maybe the youngest people there. There were about 20 of us in total, underground fanatics, extreme people into noise, black, thrash, death... everything. Very few liked black metal though, very few knew Venom.”

While it was bigger bands like Venom that gave the three boys their biggest musical inspirations, it was hanging around in Exarcheia and seeing the underground punk and grind bands that regularly practised and played there that made the idea of playing music seem attainable. Thus it was in late 1987 or early 1988 – the exact date has been lost to the sands of time – that the idea to create a band was born.

Themis: “The three of us used to meet every day and one day we found ourselves in a rehearsal studio in Athens and saw a Greek band called Vomit rehearsing. After seeing them playing we instantly came up we the idea of forming a group. Sakis already had a classic guitar by then. We started playing just for our fun and without any great expectations. I liked to watch bands, to stage-dive and everything, and I wanted to be part of this world.”

Sakis: “In 1987/1988 we decided to make our own music. I was playing guitar for about one year before we formed the band. I never had any lessons, I always wanted to do my own thing. I had no music education at all really, I just wanted to have a guitar to play. I forced my brother to play drums – of course he didn’t have any drums, so to begin with he would just play pillows on the bed. That was how we started together.”

“We didn’t have money so we stole some money to buy the first guitar, a classical guitar of course, because I wanted to compose something and see how this instrument worked. So we stole some money from my mother and said that my father took it. They had some fights about this, but I had my guitar. After some years they found out the truth of course. I never stole at any other time in my life but I was so addicted to this new life, this new world that I had in front of me, that I needed to get it somehow. Drums took much more time, it was six or seven years before Themis had his own kit.”

Non Serviam: The Official Story Of Rotting Christ is out November 30 and available to pre-order now