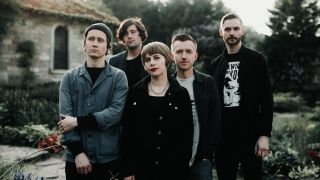 We sat down with Eva for a brief chat about the new record and embracing the darkness.

How has the state of the world around you fed into the new Rolo Tomassi record?

“In terms of writing, everything I’ve written has been biographical. I get quite a lot from being able to write and it’s quite confessional, but I don’t like really speaking about what I write about because it’s my release and it’s very important to me. I love writing, it’s one of my favourite things to do. I think right now, I’m really excited about this year, I’m in a better place right now than when I was [a few years ago].”

The new album isn’t as erratic or berserk as previous Rolo releases.

“The last record (2015’s Grievances) had quite a lot of interludes and pieces between the songs, but we tried to include everything within each song on this one, which could introduce an expansive element to it. We’ve always had interludes and things, but we didn’t do that this time so we could play the album as a whole, as one piece.

“I think in terms of the direction that we’re heading, our music sounds the way it does because we’re five people all influenced by so many different genres and bands, and that all comes together to create a cohesive thing around it. Everyone brings in different ideas and the result is that.”

There are also more clean vocals on this record.

“It wasn’t a conscious thing it just sort of unfolded as I was writing. The way we wrote this time round, because four of us are in Brighton and our guitarist is in Nottingham, we thoroughly demoed everything, which we’ve never done before. I demoed vocals in my bedroom so there was a lot of room to really play around with what I was doing and the singing wasn’t a conscious thing, it sort of unfolded that way as I was writing. I wasn’t listening to as much heavy music this time round, which may have subconsciously played a part, but it certainly wasn’t intentional.”

Time Will Die And Love Will Bury It is a pretty bleak album title. What does that phrase mean to you?

“It’s from a poem that a friend screen-printed onto a poster that she made. James (Spence, keyboard/vocals) picked the title and it’s the first time we’ve had a title before we actually started writing, so it was sort of a brief to write around, which was quite fun. It was something James had seen and it resonated with him, and I thought it was great. We’ve always had one word titles and I think we wanted to break that chain as well. It’s quite interesting to write around this title and it set the scene for everything. I tried to make it not too bleak but I do draw more influence from the darker side of things, especially with screaming. There’s a light and dark inside of everybody and I definitely harness the darkness when it comes to playing and screaming in general.”

How important is it stay true and emotional in your songwriting?

“I find it very therapeutic being able to write and get things off my chest – it’s always been that way. I see the records we’ve released as a diary of where I’ve been at different stages in my life, and I’m really thankful that I have that to look back on. Even when you’re playing certain songs it means so much to you, the song’s emotion definitely helps with the performance side of it.”

You’ve been in Rolo Tomassi for half of your life now. Does it feel like the band have achieved some kind of UK veteran status?

“I don’t know, things keep changing so much that it always feels new and fresh. We went to America to properly tour for the first time [in December], we’re still doing things that are brand new to us. It’s always fun to write a new record, and that always feels like a new chapter, so it does always feel fresh. I feel like I’m learning so much, even at this point. I certainly don’t know everything about what I’m doing ha ha, but it’s nice there are still experiences I’m yet to have with it. We’re still writing and excited about doing things!”

Rolo Tomassi’s new album Time Will Die And Love Will Bury It is out March 2, via Holy Roar Records.

In the new issue of Metal Hammer, Eva Spence gets together with Employed To Serve’s Justine Jones to talk DIY culture, UK hardcore and screaming your lungs out. Buy it directly here or become a TeamRock+ member to read it right now.

Meet the changing face of the UK underground