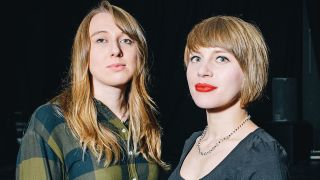 Employed To Serve met Rolo Tomassi back in 2015, when they supported the band in London. But their relationship goes deeper than that. Both bands deal in ferocious, erratic hardcore, both are signed to independent UK label Holy Roar, and both have a strong, DIY ethic when it comes to their art. We sat down with Rolo Tomassi’s Eva Spence and Employed To Serve’s Justine Jones to talk about what it means to be independent, and how the UK underground is changing for the better.

Eva, when was the first time you heard Employed To Serve?

Eva: “We were talking about gig supports a few years ago, and I think either James [Spence, vocals/keys] or Chris [Cayford, guitar]suggested you guys, and I was like, ‘Oh, they have a female vocalist as well! Amazing!’ It’s something that’s definitely growing in this scene, but when we started we barely played with any bands with female members, let alone female vocalists.”

Justine: “I didn’t realise it was something I knew I wanted. I was so used to not being with other girls on tour, as soon as I started touring with girls in bands, it was like, ‘This is sick!’ I don’t know if you have it, but you have to share your changing room – the girl’s toilets – which is really annoying as more girls are coming to shows.”

Eva: “If we arrive to a venue late and I have to do my warm-up, that’s normally where I go, because people don’t want to hear you making weird noises in the dressing room.”

Justine: “I’ve locked myself in a cubicle and come out to a really worried-looking 14-year-old! Ha ha ha! It’s not a graceful thing to warm up for.”

Rolo Tomassi were an anomaly in the early days. What are your memories of the mid-00s UK scene?

Eva: “I was 14 years old when we started playing shows, and being a female vocalist I feel like we were treated as a bit of a novelty, but we’ve managed to sustain it and grow out of that. It took a long time for people to take us seriously in that respect, but I know that age played a big part in that as well. The first female-fronted band we toured with was Blood Red Shoes, and that wasn’t until I was 19, so it was a long time before I had that experience of touring with another woman. It was a hugely male-dominated scene and it can be quite intimidating when you’re a young woman in amidst all that, but it’s something that has gotten more comfortable over the years.”

Justine, how did you feel coming into a much more evolved scene?

Justine: “I feel it was relatively painless, to be honest. The first band with another girl that I toured with was Vales. I think about how rubbish it must have been for you, because I’ve grown up musically with a lot of members that are female – Venom Prison we play with frequently. For me, because I’ve grown up playing football and things like that – my school didn’t have a girls’ team – I’m very used to being with boys and being in a very boy-dominated ‘scene’.”

Twelve years ago, it felt like Rolo Tomassi would play with any band that had a synth…

Eva: “When we started, we were just keen to play anything and anywhere that we could. We would do any show to gain experience, meeting people in other cities, swapping shows. James used to put on shows in Sheffield and we’d trade with other bands so we could play in the cities that they’re from. We toured the UK for like a month, which doesn’t happen now. We played everywhere you could possibly play, but it was vital for us.”

Justine: “I guess because there are more bands that are doing it. A lot of press has helped with this as well, and eventually it clicks that, ‘Oh I can be in a band, too.’ When you grow up and it’s nothing but boys, you don’t relate as much. I still championed Kurt Cobain and Trent Reznor when I was younger, but apart from Arch Enemy and Walls Of Jericho, I didn’t really have any women to look up to, but now that there’s so many it’s snowballed.”

Eva: “There’s no reason why any woman shouldn’t think that they can do this. It’s such a fun, empowering thing, and such a release. One of my favourite bands is Circle Takes The Square, who have a female vocalist, and Pretty Girls Make Graves, and bands that we don’t necessarily sound like. I listen to so much indie-rock and emo female-fronted bands, and that’s what I was drawing from going into Rolo Tomassi. There were women in music; they might not have been fronting the band, but they were doing it and that was inspiring to me.”

Why did you want to be a vocalist?

Eva: “In the first incarnation of Rolo Tomassi, I played keyboard and James was the second guitarist. We were looking for a vocalist, tried out a few people, and I don’t know why but I thought I’d give it a go. It wasn’t a very thought-out decision. I was sat in my mum’s car with James, we had a Dillinger song on and we were practising screaming, sat in a car park waiting for my mum outside a Somerfield supermarket or something! Ha ha ha! And that was it.”

Justine: “It is weird that we’re screaming at people. It’s one of those things you have to stumble into. When you’re five and everyone wants to be a fireman, you’re not like, ‘I want to shout at people.’”

Eva: “My friend recently asked me how to do it, and I said you need a space where you’re comfortable making a lot of noise. You need to summon up some aggression and just go with that. You can’t practise at home. I have to go to a practice space to scream because I live in a flat. You have to rent out a room somewhere that’s soundproofed and just go for it. Or sit in a car outside a supermarket.”

Justine: “We have a back room I can scream in, but we have really big French windows, and once I was trying a few things out and didn’t close the curtains. I didn’t hear the postman ring our doorbell so he walked round to tap on the window while I screaming. I don’t think we have the same postman any more.”

What do you think is so appealing about being a DIY band?

Eva: “We were booking our own shows for years, we’ve always been a very DIY band, and wanted to maintain control over what we do – we don’t want to be restricted or limited in anything that we are doing.”

Justine: “Just because there’s no major label interest in you, it doesn’t mean you can’t release records. I dabbled in the indie scene for a bit, and for them, it’s like if there’s no major label then they give up. It’s like the university music route where you have to get a manager, a label and money. But you don’t, you can just record on GarageBand if you want.”

Would you have wanted a big label to turn up and offer you a four-album deal?

Justine: “No. You need the attention when you’re a small band, you need someone to help you grow, and I feel like independent labels know how to organically grow bands. It’s more genuine when bands grow slowly and there’s no illusion over what it’s going to be.”

The latest employed to serve album, The Warmth Of A Dying Sun, is about experiencing a quarter-life crisis. Did you have one, Eva?

Eva: “Absolutely. That was one of my most stressful birthdays; I can remember dreading it, not knowing what I’m doing.”

Justine: “I don’t know if you’ve had this too, but being a woman as well, your family starts looking at your ovaries like, ‘Where are the grandkids?’ Obviously they mean well, but I want to be in a band that makes no money.”

Justine: “I feel like people are realising that you need to buy bands’ stuff. I don’t know if it’s a coincidence that people are buying more merch and buying the physical record.”

Eva: “I see that a lot. Buying merch and buying music is the best way to support bands that you love. There isn’t a lot of money in this, but it’s a way you can directly support your local scene and beyond.”

What advice would you give to potential DIY bands?

Eva: “Make sure you’re doing it for the right reasons. Do it for a passion and a love of what you do. Do for it the ability to be creative and write and tour with your friends.”

Justine: “Being in a band is my favourite thing in the world and it’s brought me the most rewarding experiences I’ve had and ever will have, but you have to do it for the right reason. You will be tired, you will be poor, you’ll get to a coffee shop and wonder if you can afford £3 right now. But it’s the best thing ever if that’s what you’re into. There are plenty of people that will support you along the way. It’s not you against the world – it’s a very rewarding and fun thing to do.”

Employed To Serve’s The Warmth Of A Dying Sun is out now. Rolo Tomassi’s Time Will Die And Love Will Bury It is out March 2. Both are via Holy Roar

Both bands will also play Download Festival at Donington in June.

Floor Jansen: "People don’t get to dictate what they want from me"

Who is Simone Simons? Getting to know Epica's enigmatic frontwoman