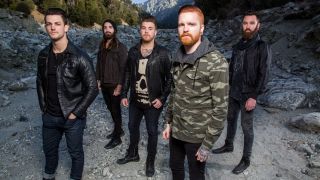 Dallas boys Memphis May Fire brought the Southern charm of their Unconditional tour to our fair isle recently in a bid to prove their worth. Here's five things we learnt when we went to see if everything really is bigger in Texas...

If ever a band look like they were produced in a petri dish to tick every stylistic box in the current modern metal scene, then it is tonight’s support act The Word Alive. Whatever you could possibly wish for is here – a wicked undercut, a shaolin ninja top-knot, a really big beard, some tie-dye – the fucking works. Not only that but they leap and stomp and spin their way through every single song of their turbo-charged set like their very lives depended on it. An aesthetic triumph.

…THAT DOESN’T MEAN THE MUSIC IS BAD THOUGH

In case you thought that bands who look the part can’t turn it on musically too, The Word Alive are here to confound your expectations. Admittedly, this is fairly by-the-books stuff but it feels powerful and vital despite a sense of relative familiarity. Vocalist Telle Smith’s knack for showing off his impressive vocal range is an undoubted highlight but he is ably backed by a band who clearly know their way round both a sweet melody line as well as a hacksaw riff. Potent yet palatable stuff.

MEMPHIS MAY FIRE ARE CHOCK FULL OF ENERGY

Or, more specifically, their flame-haired vocalist Matty Mullins is. Flourishing around the stage with joyous abandon like a kid on Christmas morning, the vocalist is evidently deliriously happy to be here. It’s a point that is not lost on his four onstage buddies who appear to grow into the evening’s proceedings, following their leaders mark and upping the ante with each successive song. The band’s current run of shows in the UK may be drawing to a close, but come the end of the night they look anything but road weary.

MATTY MULLINS’ SCREAM IS BETTER THAN HIS CLEAN VOCAL

As is so often the way for singers who interchange between ripping their larynx’s apart and doing their best boyband impression, Mr Mullins’ singing doesn’t quite come off as it might tonight. It’s not a disaster by any means but the soaring chops that define a song like The Sinner certainly feel a tad underwhelming. That being said, when he gets down to the nitty gritty of yelling his way through the more angst ridden sections of the band’s catalogue things improve considerably. Get the throat sweets out, Matty.

MMF ARE A GOOD BAND, BUT THEY HAVE TO DO MORE TO STAND OUT

Let’s be clear – this is a solid rock show. Memphis do nothing wrong, in fact they do a lot right. There’s a real and obvious connection between them and their crowd (a rare rendition of You’re Lucky It’s Not 1692 particularly pleasing the old school fans in the room) and although a nod to military families before Miles Away feels a little awkward their patter is smooth and authentic as any band going. However, there are relatively few features of tonight’s show which feel utterly distinctive or eye-popping. Unfortunately, when the trench you plough is as crowded as the one these Texans do, in order to really step up you have offer something truly out of the ordinary - and tonight MMF don’t quite achieve that.