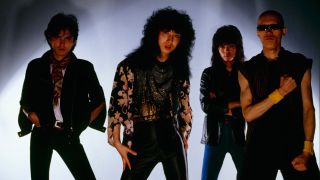 Long before Babymetal were a glint in the eye of Kitsune, the Fox God, one band crossed the globe on a mission to introduce British audiences to the wonders of Japanese metal. They were trailblazers. They were cultural ambassadors. They were Vow Wow.

The band started life as Bow Wow in 1975 with Mitsuhiro Saito on vocals and guitar, lead guitar wizard Kyoji Yamamoto, drummer Toshihiro Niimi, and bassist Kenji Sano. The quartet opened for KISS in Japan in 1977 and 1978; they played Reading festival for the first time in 1982 before a line-up change in 1984 led to a rebranding as Vow Wow.

Saito departed and was replaced by Genki Hitomi on vocals and Rei Atsumi on keys. With a sound drawing upon Deep Purple, Rainbow and Queen, the new quintet decided to chase their fortunes outside Japan and in 1986 they moved to London. “The reason [we moved] was we didn’t think Japanese people couldn’t understand our music so well,” says Yamamoto. “Our songs were sung in English and the music was too good ha ha. We wanted to show our music to British people in the birthplace of our favourite rock bands.”

However Sano soon went home, leaving Vow Wow without a bass player. “We tried to find a new Japanese bassist, but we couldn’t,” says Yamamoto, who crossed paths with Neil Murray working on the Phenomena II: Dream Runner album (a supergroup project featuring Scott Gorham, John Wetton and Glenn Hughes). “Then I remembered Neil Murray, he had left Whitesnake around the same time. So I called him up and asked him to a jam session with Vow Wow in John Henry’s studio. I still remember the very first song we jammed was Crossroads. I’ve never played a better version of Crossroads since.”

“I never really became a permanent member of the band,” says Murray. “I was keeping my options open partly because at the same time I was in a band with Bernie Marsden and Mel Galley from Whitesnake called MGM. The only time it really caused an issue was Reading festival in ’87 when I played with one band on the Saturday and one band on the Sunday and we got stuff chucked at us twice.”

Vow Wow released two albums during their UK tenure – V in 1987 and Helter Skelter in 1989 which included their cover of The Beatles’ heaviest tune. They found a keen supporter in Tommy Vance – “He came to see our Tokyo Budokan show. We were good friends,” says Yamamoto – who had the group record jingles for his Radio 1 Friday Rock Show. “There certainly was a buzz about the band when they first came over and the combination of Arista Records, the management, the PR people, there was definitely a lot of interest,” says Murray, “but there still was this slight feeling in Britain and Europe of it being a bit of a gimmick. ‘Oh, how interesting, a band from Japan.’”

As the group’s native English speaker, Murray shouldered the responsibility of providing song lyrics. “Genki would sing nonsense lyrics and then you would have to write English words to fit in with what he’d already sang,” he explains. “It was really like pulling teeth for me because not only did you have to write decent rock lyrics but they had to fit whatever phrasing he wanted the words to go along with, so it was a double problem.”

Despite the early buzz, the band never cracked the mainstream. Helter Skelter peaked at #75 in the UK album charts and after two years Murray decided to move on, while the band headed to the States to try their luck with producer Bob Ezrin. “We made a fantastic album called Mountain Top in Los Angeles in 1990,” says Yamamoto. “We believed that we could get signed to an American record company, but we couldn’t. We lost our aim and then we started to get frustrated and our relationships collapsed. It was sad but 1990 was a bad year for hard rock bands. The hard rock and heavy metal scene was in decline.”

While Vow Wow split, the story doesn’t end there. Yamamoto is still shredding with a new version of BOWWOW (now in capitals!) that he assembled in 1995 as well as pursuing his solo career and session work. He’s toured with Uli Jon Roth, jammed with Lars and Rob from Metallica and in November he played with Deep Purple’s Ian Paice in Japan, who he calls, “Absolutely fantastic. We played Burn, Black Night, Lazy, Highway Star and Smoke On The Water together. His drumming was not just a rhythm, it was music itself. He’s brilliant!”

Hitomi is now a high school English teacher, Atsumi plays in a Pink Floyd tribute band, and Niimi’s drums are gathering dust, although Yamamoto thinks he might be tempted back into action with BOWWOW.

Neil Murray went on to play with heavyweights like Brian May, Black Sabbath, the Michael Schenker Group and spent 12 years in the London production of We Will Rock You. While Babymetal has suddenly thrust Japanese metal on the world stage, Yamamoto calls them “an idol dance group” while Murray says, “Musically it’s not my scene at all but then I’m not the target audience, am I? I’m just some old fogey.” No sir, you are a legend who helped spread the international language of rock, decades before anyone thought J-metal could be cool. We salute you!