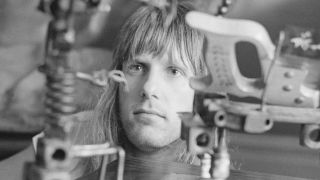 Watching over you: Emerson and a sculpture of a pianist, 1971. (Image credit: Getty)

Keith Emerson once admitted that he began to play piano while at school as a means of survival.

“I was very studious at school, and kept in the background,” he said. “I used to walk around with Beethoven sonatas under my arm. However, I was very good at avoiding being beaten up by the bullies. That was because I could also play JerryLee Lewis and Little Richard songs. So, they thought I was kind of cool and left me alone.”

Emerson was essentially self-taught, although he did have piano lessons as a child. His love of music was wide-ranging, and he was particularly influenced by the jazz great Dave Brubeck in his formative years, which you can hear on 2015’s Keith Emerson Trio album. Recorded in his parents’ living room in 1963, this very early example of Emerson’s style shows his strong jazz roots, although he also took on board influences from boogie woogie and classical music.

By 1965, Emerson had moved from Sussex to London, and joined Gary Farr And The T-Bones. It was here that Emerson started to gel together his influences, ranging from Brubeck and Fats Waller, to Bach, Aaron Copland, Oscar Peterson and Shostakovich. He was also becoming increasingly adept on the Hammond organ, with which he was to become so closely associated.

When The T-Bones started to fall apart, Emerson briefly joined British R&B band The VIPs. It was during a gig with the group in France that Emerson began to develop a more flamboyant approach. When a fight broke out in the crowd, he was told to keep playing, coaxing some unusual sounds from his Hammond by rocking it back and forth and climbing on top of it. Not only did this stop the fight, but he was encouraged to carry on playing in this manner at subsequent shows.

In early 1967, Emerson was asked to form a band to back American soul singer PP Arnold. He agreed, as long as the band in question could also play their own set. And so The Nice were born. In August the same year, the band landed a major break when they appeared at the National Jazz & Blues Festival in Windsor. Their performance attracted significant attention, and when Arnold decided to return to America, her manager Andrew Loog Oldham took on The Nice.

Over the next couple of years, first as a four-piece and then, after guitarist Davy O’List left, in their more readily recognisable form as a trio,The Nice became of one the most celebrated bands in the burgeoning progressive movement, releasing four albums, as well as having a hit single with their version of Leonard Bernstein’s America. The Nice’s performance of America at the Royal Albert Hall in 1968 created huge controversy.

“This was a charity event [Come Back Africa],” said Emerson, “and I decided to burn the Stars And Stripes when we did the song. However, it didn’t go down well, and we were banned for life from the venue.”

It was while he was with The Nice that Emerson started to stick knives into the Hammond.

“You got a great sustain from sticking knives between the keys,” he explained. “At first, I used ordinary kitchen knives, but Lemmy, who was a roadie for us, said that if I was gonna do that then I should use proper knives. And he gave me some of his collection of World War II German knives, which were much bigger.”

Emerson also began to use the Moog synthesiser, with which he’d later become as closely identified as the Hammond organ.

“I heard the album Switched On Bach by [electronic composer] Walter Carlos, and was fascinated by the strange sounds. So, I bought a Moog, and was the first rock musician to tour with one. It was a bloody nightmare, but Robert Moog, who invented it, helped me enormously.”

In 1970, though, Emerson decided to move on and The Nice split up. “I felt there was nothing left for us to achieve. What I wanted to do was put together a new band, one that could take what The Nice had done to another level.”

Emerson chose to work with former King Crimson bassist/vocalist Greg Lake and child prodigy drummer Carl Palmer, who had previously been with Atomic Rooster. And so ELP were born.

ELP were among the bands who helped shaped progressive music in the 70s, but they were also one of the biggest rock names of the era. A supergroup in every aspect, the trio were extravagant, exuberant and expansive. While capable of unmatched musical brilliance, they also earned a reputation for their startling live performances, and at the centre of it all was Emerson.

Keith became a unique showman; one who upstaged the guitar heroes of his generation. Whether rocking his keyboards back and forth, leaping across the Hammond, or playing from a prone position with the organ on top of him, he transfixed audiences. He even played a grand piano that levitated and span above the stage on ELP’s 1973-’74 American tour.

“We used it for the first time at Madison Square Garden,” recalled Emerson. “It was a Christmas [’73] concert. People in the audience were so astounded they couldn’t quite believe what they were seeing. Later on in 1974, the California Jam [concert] came up, and I said we have to do it there. There was very little space to set it up. We had the spinning piano and everything that went along with it and when the piano went up it was literally over the heads of the audience.”

With ELP, Emerson was responsible for introducing a new generation of fans to the music of great classical composers such as Copland, Mussorgsky and Bartok. He also displayed great diversity as a composer himself. And, despite the onstage theatrics, Emerson wanted to be recognised more for his artistry than as an entertainer.

“First and foremost, I am a composer. When I think of entertainers in music, I think of people like David Bowie, who created characters onstage. I was nothing like that. If I had to choose between artistry and entertainment, then I would have to say that I am more of the former. But I would like to be known as a composer before anything else.”

Following ELP’s split in 1979, Emerson wasted no time in recording a solo album, 1981’s Honky. Once again it emphasised his ability to embrace many different musical styles.

“I recorded in the Bahamas, and worked with local musicians,” he said. “I wanted it to be authentic in capturing the artistic vibe of the area.”

Emerson also began composing soundtrack music. Typically, his first move into this area was atypical, and involved a collaboration with famed Italian horror director Dario Argento on his 1980 film Inferno.

“I had told my manager for ages that I would to score a film,” he explained. “Inferno was the first film I got offered that I was available to do. I enjoyed the challenge of bringing what you see on the screen to life through music, and Dario was someone who let me have a free rein. It was very gory, but I wanted to work outside of my comfort zone.”

Over the next three decades, Emerson composed music for a variety of films in different genres across the world. It was a part of his career from which he gained immense satisfaction.

“Like being in a band, you are a collaborator. But it a different way to working with other musicians. You are hired to give someone else’s visual imagination an audio augmentation. I really enjoyed doing these movies, because it gave me the opportunity to stretch myself. You had to both ensure what you came up with worked within the context of the film, yet could also stand alone.”

The 1980s also saw Emerson reunited with Greg Lake for ’86’s Emerson, Lake & Powell album, with Cozy Powell on drums (as Carl Palmer was working with Asia). He subsequently joined Palmer and vocalist/guitarist/bassist Robert Berry in 3 and made 1988’s To The Power Of Three album. There was also an aborted attempt at a new supergroup featuring Emerson, Steve Hackett, Jack Bruce and Simon Phillips in ’82: “Jack and I fell out unfortunately, and that was the end of the band.”

ELP reunited in 1991, and released Black Moon a year later. But a combination of health problems, including Emerson being treated for Repetitive Stress Disorder, and falling live attendances led to the trio splitting up again in 1998, after putting out ’94’s In The Hot Seat. It would be ELP’s last studio album.

In 2002, The Nice reunited for a series of shows, with guitarist Dave Kilminster augmenting the original trio of Emerson, bassist Lee Jackson and drummer Brian Davison. The band released a live album, Vivacitas, recorded in Glasgow on the reunion tour a year later.

Sadly, Davison’s death in 2008 put an end to more Nice activity, although earlier this year there was talk of Emerson, Jackson and Davy O’List reprising their early role as PP Arnold’s backing band.

Emerson and Greg Lake regrouped one final time for an acoustic American tour in April 2010, before ELP played
a 40th anniversary show at the High Voltage Festival in London on July 25 the same year. It would be their last ever live performance.

In 2012, Emerson embarked on a new phase in his career, releasing the well- received Three Fates Project album, also featuring Marc Bonilla and Terje Mikkelsen. On July 10, 2015 he played his final live gig, at London’s Barbican. The concert was a celebration of the Moog, an instrument which Emerson more than any other musician helped bring to the fore. It was a fitting farewell performance from a man who dominated progressive music for close on half a century.