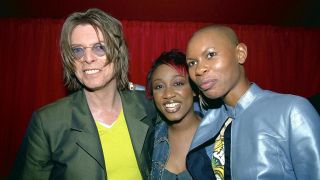 Last week, David Bowie passed away at the age of 69 following an 18-month battle with cancer. Here, Skunk Anansie vocalist Skin remembers the late singer and tells TeamRock about his influence and generosity towards other bands.

“As an artist, David Bowie was obviously hugely influential – like The Beatles and The Rolling Stones. In my opinion, if you weren’t influenced by him in one way or another then you’re probably a shit band.

“There’s no way you can be an artist and at some point not have a Bowie moment. So, as an artist I feel sad. But I feel the saddest for his wife Iman, because their relationship was one of the great rock ‘n’ roll love stories. She’s a legend and an icon in her own right, and the two of them together were just magic. It was a great love story and I feel really awful that that’s ended for her, because I know that they were so happy. They were a magical rock ‘n’ roll couple.”

“We toured with David Bowie a lot. We played lots of the same festivals and he was a big Skunk Anansie fan. He actually sang one of our songs once, which was a real moment. He invited us to listen to his show by the side of stage, and normally if you watch a gig from the side of the stage the sound is crap. But Bowie had created this side-of-stage area where we could watch the show with little monitors and stuff like that, and it was just Iman, some of his family members, and Skunk Anansie.

“He broke into one of our songs – Milk Is My Sugar – and it made us so happy. At the end he said, ‘Ah, I don’t sing it as well as Skin though.’ I was like, ‘Fucking hell, I can’t believe he’s just said that!’ Obviously he did sing it better than me, but that’s just who he was: he was a real cutie, very generous and open towards other bands.

“My favourite song is Space Oddity, for the poignant lyrical content, especially the last line: ‘Tell my wife I love her very much, she knows’ and the fact the lyrics turn full circle. David will never be forgotten.”

Skin was speaking to Matt Stocks. Skunk Anansie’s album Anarchytecture is out now.