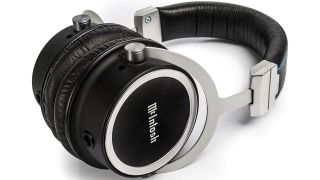 A number of names were either made or reinforced on the back of the legendary Woodstock festival of 1969 – Santana, Joe Cocker, Max Yasgur, Wavy Gravy – but (along with the latter) McIntosh is not one of the ones that springs to mind. Yet it was thanks to the McIntosh-powered PA that the half-a-million crowd at Woodstock got to hear the now iconic sets from Jimi Hendrix and the rest.

Now, 46 years and a lot of experience, development and production of high-end audio kit later, McIntosh have entered the somewhat overcrowded headphones market. And in a market where ’phones are still widely seen as a fashion accessory rather then a music-delivery component, and many of them are more style than substance, what an entrance it is.

The McIntosh MHP1000 over-ear headphones are designed probably by men in white lab coats with strange powers and garish ties. They’re precision engineered, look both stylish – brushed aluminium, sexy black leather and distinctive blue stitching on the headband – yet hi-fi-serious, luxuriously comfortable to wear for long periods, and are aimed at those who rate their headphones by what they sound like rather than by checking out how they look in the mirror.

We’re told that the headphones are ideally suited for home use, paired with McIntosh’s new MHA100 headphone amplifier (well they would say that, wouldn’t they?), which will set you back another bank robbery, but even hooked up to a past-its-retirement-date, steam-powered stereo the sound they deliver really is music to your ears. They’re so groovy they even come with their own stand, fer freak’s sake! And even though they cost more than the fees Santana and Joe Cocker combined got paid to play Woodstock (mind you, if you’d bought a ticket in advance for the three-day love-in-cum-disaster zone you’d have got change out of a tenner), we’re lovin’ ’em.

Power to the people!

Festival sound has come a long way since the ‘monster’ used at the ’69 Isle of Wight.

Most people who saw Muse at this year’s Download probably didn’t pay real attention to the superb quality of the audio. We’re so used to hi-fi sound at festivals these days that we tend not to notice how good it is – or how powerful. How things have changed.

For the 1969 Isle of Wight festival, a PA system claimed to be the biggest ever used anywhere in the world punched out 2,000 watts. The Heavy Metal Holocaust in 1981 boasted more than 100,000 watts. The 1998 Monsters Of Rock PA made the Guinness Book Of Records in ’69 with a staggering potential 523,000-watt capability, and apparently still holds the record for the largest PA ever.