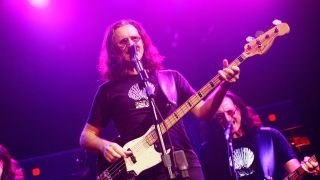 Canadian rock maestros celebreate a hefty 18-year slice of their career with the release of their Retrospective III collection that takes in their last album of the 80s, 1989's Presto, and brings everything up to date with 2007's much-heralded Snakes & Arrows. After Roll With The Bones (1991) and Counterparts (1993) the trio took a six-year break with the release of 1996's Test For Echo, a period of enforced inactivity as drummer Neil Peart's daughter was killed in a car accident followed by his wife succumbing to cancer a year later. However, the band returned – at first with the tentative steps of 2002’s Vapor Trails and then far more emphatically with the well- received Snakes & Arrows. “I think I’d place Snakes & Arrows among our top three albums,” singer/bassist Geddy Lee told Classic Rock proudly on the eve of the release of the band’s new compilation.

This is Rush’s third retrospective collection. How much involvement do you, as the band, have in putting these things together? Or is the task of putting together a compilation simply left to someone else these days?

We all had our two cents worth in there. We got a tracklisting from management saying: “These are our suggestions.” Then we tore it apart, ha-ha. Everyone was like: “Nah, I don’t want that in” or “Why don’t we put this one in, instead?” What you basically want is a representation of the period, and you also want to include some things that you thought got overlooked. Songs that deserve a second chance or songs that through playing live over the years you’ve gotten to appreciate. That’s the combination of different attitudes you take when putting these things together.

One of the appealing factors behind Retrospective III is that it’s not just a collection of the singles from your albums.

Well, that’s because we don’t really have hits. It’s not like a greatest hits, more All The Songs That Were Not Hits by Rush, ha-ha. These are songs that we’re proud of and believe that somehow have passed the test of time, and you try and put them into a package that adheres to the concept of a retrospective.

**Retrospective III covers an intriguing era for Rush. From a successful period, to a six-year hiatus, to a quite spectacular return to form. **

Well, we were fortunate enough to find our audience still waiting for us after almost six years. We rediscovered what was fun about working together and I think we’ve evolved into a darn good live band. And I think we’re just kind of riding that. We learned that there’s no crystal ball, you never know what’s going to happen in your life. So let’s appreciate the fact that we’re still writing together and enjoy playing together.

**Retrospective III starts at a time when one Rush album would perhaps be keyboard-heavy, the next would be guitar-heavy, as if you were always searching for the ideal sound. And yet it culminates with material from Snakes & Arrows where you seem to have discovered what you were searching for. **_ _

I would agree with that. In particular with Snakes & Arrows we found that space we’ve been wanting to get to in terms of keeping the balance of influences. There are so many ways we can go, and because we’re over-ambitious when putting our songs together, it’s very easy to bloat in one direction or to lose yourself in the excitement of a new sound. I think it began with Vapor Trails but really came together with Snakes & Arrows. And I think the Feedback EP we did really helped because it reminded us of our roots and fundamental things about rock songs that may have got lost in the technocratic attitude that we sometimes have.

Live, you also seem to have found a happy medium of blending the old, which fans always hanker for, with your newer material. Your live set seems a comfortable fit for you_. _

The live thing is something where we really try to make everybody happy. And that can be really hard. But we’ve been lucky that we have enough fans to support us to be able to go out without an opening act and play for three hours. That’s a wonderful opportunity to mix things up and to play the songs you’re dying to play and pull things out of the past fans are longing to hear. That’s a luxury for us.

You didn’t play in the UK between the 1992 Roll The Bones tour and your 30th Anniversary dates in 2004. At the time rumours suggested the absence was due to promoters informing you of a lack of interest. You were also reported to be shocked when 2007’s Snakes & Arrows dates sold so quickly. True?

It was a combination of things. We were burnt out by touring so we stripped down our touring schedule to undertake what we needed to do to survive, which was just in North America. At the same time we never felt like we had much support from our record company in the UK. We’ve had people more enthusiastic than others, but we felt no great interest. And up to this day we don’t feel an enthusiastic base of support when we do come over. That was a contributing factor, but we don’t tour the UK on that basis. We tour for our fans, and our decisions are based on how we feel. We got insular and stopped looking at Rush in terms of the whole world. I think we’d been on the road for too many years.

**Another rumour, probably from an over-zealous fan, claims your next studio work may return to a conceptual theme, such as with your legendary 2112 album. **

We haven’t even discussed our next work yet.

So, what’s next for Rush?

Well, right now we’re all taking a well-needed break. We’re pooped and we’re not spring chickens anymore, so we do need that break. So that’s what we’re doing. I’m just working hard on my social skills again, ha-ha.