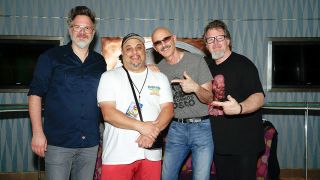 “I’m more than just a fan,” says ProgStock’s Tom Palmieri. “I want prog to survive, I want it to thrive, and I’m tired of it not being placed alongside what’s called ‘popular’ music.”

Palmieri has lived in New Jersey, USA, all his life, but his love affair with prog began when he was in his early teens. Since then, he’s been a regular at events such as Cruise To The Edge, Moody Blues Cruise and RosFest, and has even spent the last few years managing US proggers Circuline. Yet his frustration over what he regards as “no understanding of what marketing is” within the world of prog events inspired him and 3RDegree’s Robert Pashman to come up with their own music festival. The pair have a passionate team behind them for the inaugural ProgStock, which includes Andrew Colyer from Circuline, House Of Prog’s Rob Rutz and Marty Dorfman, The Flower Kings cover artist Ed Unitsky, and Sven Henriksen, who Palmieri describes as a prog “superfan”. The festival is due to be held at New Jersey’s Union County Performing Arts Center between October 13-15, and the team are taking a leap of faith by funding it almost exclusively via PledgeMusic. “This is our first year and it all hinges on the crowdfunding campaign,” he says. “If we don’t reach our target, we won’t be able to pull it off.”

Although the name hints at muddy fields, ProgStock will be held at a lavish 1300-seater former vaudeville theatre within the commuter town of Rahway. The full line-up has already been announced and includes live performances from Aisles, Francis Dunnery, Peter Jones, Karmakanic, and Glass Hammer. But the shows are just one aspect and there will also be prog-related stalls, organised meet and greets, and aftershow parties. “It’s about going somewhere for three days, enjoying the festival experience and being among like-minded music fans,” Palmieri adds. “We’re not trying to take a piece of the pie; we want to help everyone build a bigger pie.”

At the time of press, there’s just over a month left to pledge your support, and Palmieri remains optimistic. “I still see this as an annual event, even if we don’t succeed this year.”

Pre-order your pass at: www.progstock.com.