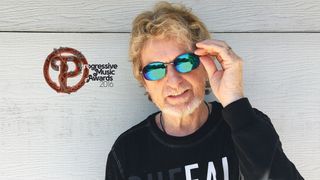 Jon Anderson is delighted to hear that he will be honoured with the Prog God Award at this year’s Progressive Music Awards, not least because it puts him back on level terms with his long‑time friend Rick Wakeman when it comes to bragging rights.

“About time! I first heard about this award when Rick won it. I said: ‘Hey, what about me, Rick?’ He said, ‘Don’t worry, your time will come.’ And now it has! Seriously, anything that represents my work and what you might consider my achievements is just fantastic.”

It’s richly deserved. At the heart of Yes, Anderson was a pioneer for prog. “Well yes, but I was part of the Yes pushing into the 70s, musically,” he says. “A wonderful time. I was following in the footsteps of Paul McCartney, The Beatles and Revolver, Frank Zappa, John McLaughlin… and when I hear it now, I’m amazed at how well recorded our music was for the time. Yes’ music became an energy all to itself.”

With Yes, he also took risks that still sound radical today. “I was in a dream world for 10 years – it was truly magical. I was learning about structure. I’d work out a thematic piece, then a new section, then how to come back to the first themes. Like classical music, but based on a new energy. Not just verse-chorus-verse-chorus, which was what I grew up with – and don’t get me wrong, I loved that – but something new and powerful in a different way. Of course, it helped that I was working with Steve Howe and Rick Wakeman and Chris Squire – people who understood all this and made it possible. I was there in the middle of it all, throwing out ideas all the time – and I mean all the time. And I still tend to do that every single day! For me, the idea of progressive music is always there. It’s never stopped. It’s my life.”

For me, the idea of progressive music is always there. It’s never stopped. It’s my life.

And as his ongoing work with Jean-Luc Ponty, Anderson/Stolt and Anderson Rabin Wakeman displays, making new music is still Anderson’s calling. “It’s your challenge to make music that’s an adventure, a musical journey. It’s not so much about the business any more. The last thing I think now is whether that’ll sound good on the radio. I mean, Roundabout was eight minutes long as we envisaged it, with its midsection. And that was like a template to all the Yes music that was coming. Atlantic took out the scissors and cut it into a hit record… thankfully! We were shocked at first but now I think it was a gift. I remember we were driving through Pennsylvania and it came on the radio and none of us knew it had been edited. We all sat up and said: ‘Wait a minute! What’s going on?’ But of course it became a big breakthrough record for us, so thank you!”

Was that the tipping point which encouraged him to boldly go further ‘out there’? “Well, without that hit, Yes might not have stayed around very much longer – it’s funny,” Anderson muses. “Fragile had all these extended tracks – Heart Of The Sunrise, South Side Of The Sky – and the idea was to extend the music for live performance onstage. Our audiences then were willing to sit through 10 minutes of our music without a sound – you could hear a pin drop. We wanted to please and inspire them. They came to our shows to listen then, not to dance. It was a unique period for music. So we were able to do even longer-form music like Close To The Edge, Tales From Topographic Oceans. Thirty years later we went on and those audiences were still there at the beginning of the 21st century. Yes survived!”

Yes enjoyed another phase of popularity with the 80s reboot of 90125 and Big Generator. “That was such a successful time,” he remembers. “The 90125 album went Top 10 all around the known world. No matter where we went, there were 10 or 20 thousand people going bananas! It was very exciting. Being up there onstage, the audience getting so energised meant we got more excited and so it fed into each other. But I’d say to the guys back then: ‘We mustn’t lose our momentum.’ I mean, musically. I’d say: ‘We’ve got to be very, very good.’ I was quite the taskmaster, wanting us to be healthy and everything! Being on the road a long time can drain you; you can finish up being a wreck. But you’re always a musician, and my ongoing dream is to be always evolving as one. And that carried me forward into new pastures. For example now, with Jean-Luc Ponty.”

With Yes, I was in a dream world for 10 years – it was truly magical.

Let’s not overlook Anderson’s success as half of Jon & Vangelis too. “The luck of the draw, I met Vangelis – a very different kind of musician, who started the trend of electronic music. Over the 80s we were evolving musically, not thinking about what was hip or what was good business. There’s my classic story of how we inspired Michael Jackson’s Thriller. Quincy [Jones] told me that he and Michael had been listening to our [Jon & Vangelis’] album The Friends Of Mr. Cairo. They took the riff and made it funky for Billie Jean. Quincy said he’d been recording our song State Of Independence with Donna Summer, and I said he had an incredible guy singing backing vocals. He said, ‘That guy was Michael – we were both digging your album!’ So that’s kinda cool, that cross-pollination in music. Yes were always doing things like that: jazz fusion, classical fusion. After the breakthrough of Fragile, we were bold enough to do And You And I, The Gates Of Delirium…”

The Gates Of Delirium, from Relayer, is as mind-blowing as any creation in Anderson’s – or even prog’s – history. “It’s wild! It drove everybody crazy!” says Anderson. “I wanted a war in the middle of it. I played piano badly, but Patrick Moraz was eager to learn and develop my ideas: he was very helpful. The other guys were going: ‘Why do you want to do such a thing?’ I just saw it as being dark everywhere, but then a coming out into the light, representing peace. I’d got a bunch of war movies with sword fights and sampled them – before sampling was invented! – and had that on in the background over Steve’s soaring solos. The band were saying: ‘What are you doing? I can’t hear myself!’

“Oh, it was such a trip to do. You recorded an album in a very intense period of, say, two months then. You think it’s done, but it’s still in its infancy musically. On tour, within a month you start playing it differently, with a new passion, like you’ve figured it out. Music was incredible on tour with Yes – it got better and better.”

Does he feel his music keeps on getting better and better? “Progressive music is more than just progressive rock,” Anderson says firmly. “That’s what I’ve been feeling over the last few years. I want it to be progressive in my mind. I’ll always go back to the classical side, and to the ethnic side, and little vignettes of Indian, African, Celtic, world music… just everything. That’s a natural progression. You go back to the origins to realise what the future is.

“All the music you ever do, it’s like a stepping stone to a bigger, better, brighter state of consciousness. Everything is perception: it’s all about how you perceive things. Life is like the ocean: it goes up, it goes down.”

The Progressive Music Awards take place on September 1 in London. Visit the Prog Awards microsite to cast your vote for the rest of the awards. Voting closes on July 27.

Jon Anderson and Roine Stolt: The story behind new album Invention Of Knowledge