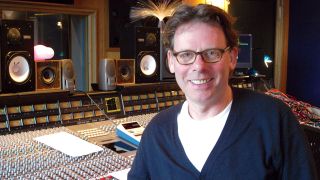 He’s the man who produced Genesis during the hugely successful period in the 80s, and also worked with Peter Gabriel, and on Yes’ Drama opus. This is Hugh Padgham.

“I started as a tape op at Advision Studios in London at the end of 1973,” he says of his first job. “But I was made redundant because of the three-day week in 1974. However,I got a job at Lansdowne Studios [also in London], which was owned by a jazz producer called Denis Preston. I worked with so many different types of bands from avant-garde jazz to heavy rock and pop. I got a very good overall education in recording techniques.”

Padgham’s big break came when he became involved with Townhouse Studios in London.

“We had the best equipment, and I was constantly busy. We opened in late ’78, and I didn’t have time for a holiday for a few years! My first session there was on the Derek and Clive album Ad Nauseum. And in ’79 I got to work with Peter Gabriel on his third solo album. It was a real experience working with him – he takes so long to do anything!”

It was through Gabriel that Padgham met Phil Collins, working with him on the enormously successful Face Value album in 1981, and was then introduced to the world of Genesis. His first album with them was 1981’s Abacab; he was also there for 1983’s self-titled release and then for the monster-selling Invisible Touch three years later.

“It was Phil who brought me in, to record Abacab,” recalls Padgham. “I co-produced the others. During that period they were more rhythm- oriented, and a rock band as opposed to a prog one. Genesis were fine to work with, and I’m proud that those albums were their most commercially successful.”

If the Genesis sessions were smooth, then the same cannot be said of Drama.

“It was full of dramas. There was so much tension around. I’d done a Buggles session, and it was Trevor Horn who roped me into the Yes camp to help out. Eddy Offord [who produced the album with the band] was mad, but a genius. I got on well with Steve Howe and Alan White. But it was not easy!”

These days, Padgham has his own studio, which he believes is essential, for any producer, and despite the massive fall in record sales is still much in demand.

This feature originally appeared in Prog 7.