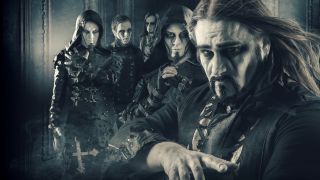 “When we wrote our first album in 2004, and were a power metal band, it was like being a Satanist in the Vatican,” remembers Powerwolf guitarist Matthew Greywolf.

“Nobody cared about it. Power metal was far from being any kind of actual movement in the scene. It’s maybe even easier for a death metal band to get first recognition, because there’s a scene structure. In power metal, it’s much harder. You’ve got to be very lucky just to get started.”

Powerwolf didn’t just “get started”. Inside a decade, they had a Number One album in their native Germany, and now regularly play 2,000-capacity shows over there – even if they still have some ground to make up in the UK, where they will play Islington Academy in September. They may have needed some luck to get going, but their success is clearly due to more than just good fortune. A combination of a unique visual style, a religious lyrical slant that goes beyond tired tropes, and choruses more infectious than any lycanthropy, have quickly seen them rise to alphas in the power metal pack.

To look at, Powerwolf could easily be mistaken for a black metal band. Their dramatic make-up is not a million miles off Dimmu Borgir’s, or the early incarnation of Emperor. And while power metal lyrics frequently stick to a narrow set of subjects – fantasy (Rhapsody Of Fire), historical war (Sabaton) and heroism (pretty much everyone else) – Powerwolf have carved out a religious niche of their own, their tongues firmly in cheek (fan favourite Resurrection By Erection is a firm fixture in their live set). Plus, they’re called Powerwolf – a name so power metal even Dragonforce probably wish they’d thought of it first.

“We didn’t have power metal in mind when we called the band ‘Powerwolf’; it was more the power itself that fits the music, because the music is powerful!” says Matthew. “It was actually a year later that somebody came up and put the thought into our mind, ‘Did you mean power metal by it?’ Well, no we didn’t, but at least it’s not the most wrong connection!”

Powerwolf’s influences – cited by Matthew as Iron Maiden, Mercyful Fate, Savatage, Running Wild and Black Sabbath – are far from radical, even if the band are noticeably far more skilled (and OTT) than most of their peers. But there’s a curious melodic sensibility that may have something to do with their Romanian singer Attila Dorn, whose introduction to metal was relatively recent (and who doesn’t speak much English, hence Matthew’s role as spokesman for the band).

“Attila didn’t know much heavy metal before he joined Powerwolf [in 2004],” explains Matthew. “It’s still the case that, especially when playing festivals, he is still exploring bands that are totally obvious to everyone else. His not being influenced by any heavy metal band was a big influence on Powerwolf, in a way, because it freed all of us from our way of thinking.

“He was doing musicals before, and he was not happy with only doing stuff like that and wanted to broaden his horizons, so he wanted to sing in a heavy metal band. That’s where we caught him.”

After forming, the five-piece – completed by original members guitarist Charles Greywolf (no relation) and Falk Maria Schlegel (keyboards), plus drummer Roel van Helden, who joined in 2011 – quickly settled on the wolf as their totem animal (“It’s an animal that’s dangerous, that’s feared, and mystical, and all of these characteristics can refer to heavy metal music”) and began writing music, releasing debut album Return In Bloodred in early 2005. It formed the stylistic platform they would build on for 2007’s Lupus Dei, where they really cemented their lyrical style, making religious history and quasi-religious mythology the core tenet. The album seemed to be a simple werewolves-and-vampires, blood-drenched romp, but was actually a well-researched tale about loss of faith, the deceptions of religious dogma, and God (‘Lupus Dei’ translates as ‘Wolf Of God’, a play on ‘Agnus Dei’ – Lamb Of God – another name for Christ). It’s a depth that would be easy to miss, given funny songtitles such as In Blood We Trust and Saturday Satan.

While the root cause of Powerwolf’s interest in religion appears straightforward (“we’re nerds concerning mythology and history in general,” is how Matthew tries to sum it up), dig a little deeper, and you find out more interesting answers than you normally get from a power metal band.

“I was raised a Catholic,” Matthew tells us. “What was fascinating for me was, even at the age of 10 or 11, the contrast between what frame of Catholicism you’ve been taught at church or in religious education, and the other aspects you could read about in history. The parts didn’t fit together for me. So I became really interested in the connection between both, finding out what actually happened with the idea of religion in history. I think it’s quite obvious that the spiritual basics of a religion, of a belief, do not have much in common with how religions are used. For example, if you take the Crusades, the actual act of war does not have much in common with what you can read about Christianity in the Bible.”

It turned out this interest was shared by the rest of the band, and at this point they had their identity. Lupus Dei was followed by the more polished and infectious, if less consistent, Bible Of The Beast in 2009, which became the band’s first album to chart in Germany, reaching Number 76. It was, however, not the tipping point, as they insufficiently toured it. That breakthrough came two years later, when Blood Of The Saints saw their profile rise dramatically. It hit the German album charts at Number 23, and chartered in Switzerland, becoming their first non-domestic placement. In the UK, though, the timing was inauspicious; the band had played Bloodstock the previous year, but people still knew little about them.

But by the time Preachers Of The Night was released in 2013, Powerwolf’s time was nigh. While success was most obvious in their home country – a metal album reaching the top of the charts is news anywhere, let alone if it’s from a name outside the Metallicas and Slipknots of the world – the band were shocked when they saw their rise in Britain. Their tour here was one solitary date at London’s Underworld, but it was easily sold out, and rammed to the rafters with fans happy to chant the band’s name from beginning to end. Some of the crowd had even travelled across the country to be there.

Now armed with gloriously bombastic new album Blessed & Possessed, and that UK date on the horizon, Powerwolf’s aim is to capitalise on their rise here. Matthew acknowledges that non-Germanic countries need more attention if the band are to fulfil their potential popularity, and assures us there are plans to make that happen.

With Powerwolf’s bigger status, however, have come bigger questions… most commonly about their religious affiliations.

“Some people are confused because we never make a point of saying the silly words of which side we are on,” Matthew says. “A lot of people ask us, ‘Are you Satanists? Are you Christians?’ And we never say anything about that, and we never will, because in what we do in Powerwolf, it’s not important what we as individuals believe or stand for. We sometimes describe religious history, we sometimes write about Satanism, Catholicism, or whatever, but we never judge anything. I think on one side, this is confusing people, but on the other side, a lot of people do understand that we only describe or write lyrics about something, not to deliver a message.”

The way Powerwolf avoid coming across as po-faced is by using humour, but this is something of a double-edged sword. With some of their songtitles and lyrics, it would be easy to mistake them for a joke band – until you speak to them. Matthew is articulate and comes across as very intelligent, considering questions thoughtfully before answering in depth and at length, with a firm grasp of nuance, and avoids trite, rote or ambiguous responses. In fact, were it not for the accent, you could occasionally mistake him for someone like Behemoth frontman Nergal, with a similar confidence, honesty and drive. This is not what you expect from a band that appear fond of a laugh.

“Humour is essential in life,” Matthew states. “There are way too many people taking themselves far too seriously – and especially way too many bands taking themselves too seriously. I’m happy we’ve treasured the ability to write lyrics with tongue in cheek, and be able to laugh about ourselves. It’s essential for our creativity, for us. But there’s more behind it. It’s very important for me to have some kind of humour in the lyrics to make sure we’re not religious preachers. We have a song like Resurrection By Erection. It’s obvious we’re not Catholic extremists. So that’s why a certain slight humour will always be a part of Powerwolf.”

With their combination of an unusual look, a lyrical subject that could fit in black metal with different delivery, and more hooks than an international angling competition, Powerwolf’s mix of catchy metal and humour looks ready to lead vast congregations to the church of the wolf – and get them to sing songs like Sanctified With Dynamite with unironic, lupine grins on every face.

We spoke to Holly Root-Gutteridge, a zoologist and animal behaviour expert, to find out which species is most powerful…

Holly: “Wolves use very simple hunting strategies once they find their prey, so Powerwolf’s ability to change through different rhythms would probably win.”

Holly: “Wolves travel about 30 miles a day at a pace of 5mph, but can run at 40mph for short bursts. Powerwolf averaged a show every nine days in 2013. A wolf could have brought down three elk in that time or travelled nearly 300 miles.”

To find out more about wolves, visit the UK Wolf Conservation Trust at ukwct.org.uk