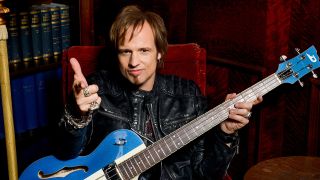 You’ve previously labelled your music with Avantasia as ‘Bombastrock’. So would you reject the ‘power metal’ tag? Call it whatever you want. I grew up with music like Meat Loaf, Magnum, Queen – all those bands had power, drama, and they were trying to show the world what they had to offer instead of just playing it and looking at their shoes while just playing two chords. I’ve always been into flamboyant performances, big arrangements. I’m a firm believer that anything worth doing is worth overdoing. Ha ha! That’s how I approach music. But I don’t think about what genre it is. When Steve Harris is sitting in his ivory mansion writing a song, do you think he’s asking himself, ‘Is this hard rock or heavy metal or power metal?’ Ha ha! No!

You began making music in the early 1990s. It must have been a difficult time to play ‘bombastrock’…

I took it very personally when grunge took over. All those bands in lumberjack shirts, staring at their shoes saying ‘Look! I can play two chords but they just sound shitty!’ I was like, ‘Are they taking the piss? Are they seriously trying to sell me this crap? Now I’m more open-minded, but when I was 15 and Pearl Jam and Nirvana came out it was like, ‘Let’s throw out everything about music that I love’. It was a pain in the ass and that’s why I started playing music – because I didn’t hear it myself.

Avantasia began as a side-project to your other band, Edguy, a more straight-ahead metal outfit. What made you want to do something more ambitious?

I was happy in Edguy – I still am. But I wanted to create music that could use guest vocalists, people like Bob Catley, Michael Kiske from Helloween, or Sharon den Adel from Within Temptation. Some men go into their basement and work on model trains – I wanted to go into my basement and work on a piece of music that would outshine anything known to humankind! If I was in a radio interview I would ask you to put some reverb over that bit! Ha ha!

And the drama is always important, right?

Absolutely. The music I play has always been dramatic and some people might consider it to be cheesy, but that’s what classic rock and metal are supposed to be. And it’s just the way I am. My wife would probably say I have a lot of drama in my personality, whatever I do. I’m a very dramatic person.

Thank you! I actually asked Meat Loaf to sing it, and at a certain time it looked like there was a good chance. Then his management had different plans because he was actually about to go back to working with Steinman. So I had this great tribute to Jim Steinman but I was Meat Loafless. So I had three options – throw the song out of the window, throw myself out of the window, or have a go at the song myself.

Another new song, Let The Storm Descend Upon You, urges us to ‘prevail against the hands that take your flash away’. Is that a rallying cry for your fans?

Erm, not really. It’s set within the concept, and it’s about the protagonist, who is an agnostic scientist, who sort of coincidentally bumps into a bunch of occult scientists who want to manipulate people’s individual perception of time. I know, that sounds like I smoke weird stuff, but it does make sense, it’s expressed within a lot of metaphors.

Are you inspired by fantasy and sci-fi novels?

No, I don’t usually have the patience. I just like fantastic atmospheres. I like going to the forest and sitting there for hours and just listening to the birds. I like fantastic movies, but when it comes to reading I prefer reading mystics of the Middle Ages like Jakob Boehme or Valentin Andreae – that sort of philosophical stuff.

Do you see Avantasia’s music as escapism?

Absolutely. That’s why the language I’m using is a certain type of language that is colourful. Ronnie James Dio did that. He was using a different vocabulary, but he used words that had a certain impact, words that made certain associations come up. I try to paint with music and create worlds that people can escape to. But this is not just fantasy stuff – I want to write stuff that people can relate to from everyday life.

Your guest vocalists seem to be picked from fields of music pretty close to your own. Would you ever invite anyone from outside that world, like a Lady Gaga or someone?

Well, never say never. We were thinking about asking [Sisters Of Mercy frontman] Andrew Eldritch for the new album, for a song called Draconian Love. We couldn’t get hold of him but we kept hold of the song. But I wouldn’t hesitate to use someone like that if the song suited it, but not as a cheap publicity thing. For example, if Madonna or Robbie Williams asked me if they could be part of Avantasia I would seriously consider it. But only if it was right for the song.

Do you ever listen to Avantasia’s music and think, ‘That’s a bit over-the-top’?

No, I embrace it. I always think, ‘What would Freddie Mercury have done?’ If you look at some of the things that Queen have done, the phrase ‘Too much’ wouldn’t have been in their vocabulary. That’s the spirit I believe in. In music now, musicians spend a lot of time thinking about what they could do, what they couldn’t do, what they should say, what they shouldn’t. The greats, the forefathers of our kind of music, they never asked that question. That’s how I approach things: ‘That’s pretty crazy – let’s do it!’

Is it true that you’re competing to represent Germany in Eurovision this year?

[Sheepishly] Well, we’re taking part in the preliminaries. We’re competing with all those mainstream artists who are all over the television in Germany. We will have a chance to get so much exposure, to reach millions with our music, because especially in Germany people may not even know about our existence. It’s a nice promotion.