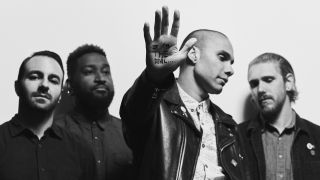 The first taste of Letlive’s highly-anticipated fourth album ‘If I’m The Devil…’ comes in the shape of ‘Good Mourning, America’, a lament against police brutality in America.

It’s a topic that’s been brought to the fore ever since the shooting of Michael Brown, an unarmed black teenager, in Ferguson, Missouri, in 2014. A recent study by the University of Louisville and the University of South Carolina revealed the shocking statistics: of the 93 fatal police shootings in the US in 2015, 40% were black men, despite black people making up just 13% of the US population.

It’s a topic close to Jason’s heart. He’s previously spoken about how he struggled to fit in as a mixed-race child in a poor suburb of California, but it was the experience of being unfairly targeted by a policeman that led him to question the ‘imbalance of power’, as he puts it, through his lyrics. As the band put the finishing touches to their album, the vocalist details an experience with the police which has affected him deeply…

Could you tell us about some of the subjects and themes you’re exploring on the new album?
Jason Aalon Butler: “I took a pretty big chunk of things that had happened to me – things that have happened in my life that I haven’t been able to discuss, or that didn’t get enough airing. I don’t mean to seem trite, but there’s so much going on right now in our country when it comes to exertion of power, distribution of power and imbalance of power. These things are happening with our authoritative figures like police or politicians and it seems like an ‘us versus them’ mentality right now. Ostensibly, turning on the television or my computer and seeing my daily news feed, and seeing that a young, specifically disenfranchised individual has been shot or killed, and the person that’s done the deed has no consequences, repercussions, or indictment. The case gets thrown out or dismissed. We must be active and we must be involved in changing the things we don’t find to be right. I’m not a victim but I was involved in something very similar; I was arrested for things that I don’t feel were wrong, even like socially and societally, I don’t feel were fair. So I’ve talked about that [on Good Mourning, America]. I’ve also talked about sexuality, feminism, gender binarism, things that I’ve always had within me and I think that I’m versed enough now that I can communicate them without being a complaining, hypocritical, man. I’m older now and I think I understand a better approach to explaining my position on these things. It goes from equal rights for women and the disenfranchised, as well as understanding that there’s a place where we can all coexist. I kinda wrote a love song too, it’s twisted but it’s a love song, so there is a silver lining to all that.

Why have you not mentioned your arrest before?
“I used to not want to talk about it. Society has created this idea that because I was arrested, I’m supposed to feel ashamed. But in reality, I feel no shame in what I was doing. Morally, what I was doing was not a shameful act. My intent was not to hurt anyone. I was defending not only my beliefs but my rights.”

Can you tell us what happened?
“It was on May 5, 2007. I believe the term is ‘assault on a police officer’. When you see that, you think, ‘This guy’s fucking aggressive, he’s clearly stirring up trouble’. I was in a situation where I was trying to do the right thing. I was trying to take a friend home who’d been drinking at a party. I believe the police are sworn in to serve and protect, but they were focusing on my young friend, who’s Hispanic. I don’t know if this is why, but we were a very different background, myself and my friend, to the police officers. All of these [other] people that were similar to them in their ethnic background, they were letting them go. They were drunk, they were high, they were making a ruckus, and they were letting these people go – they were just turning a blind eye to these kids. But I believe my friend was profiled.”

Had you been drinking too?
“I said to the policeman, ‘I’m completely sober, I’m of age, I have a valid driving license, you can breathalyse me, and I’ll take him home.’ He’s like my little brother, he’s from Inglewood – my city. As soon as I started to assert who I was as a citizen, this cop just seemed like he wanted to flex on me. He was using remarks that were threatening or hostile towards me. I said, ‘I can diffuse the situation and make it easier on you if I take him home.’ And then he asked me a question about who I am and who I thought I was. I guess I did provoke him at this point because I said, ‘You’re only here to take us down, and I’m trying to make sure that that doesn’t happen.’”

So what happened next?
“Unprovoked, he tried to grab me. I put my hand up against his grasp, and his partner grabbed me and then gave me to him in a hold. He put me in a chokehold because he was frustrated. My friend, who was inebriated, started to yell, and then my other friend started to yell, and it became this complete chaos where everyone was very afraid. Unfortunately, we in Inglewood are afraid of the police. We think they’re there to harm us not to help us, because that’s what we’ve been shown for the most part. I was trying to get released, and eventually I yelled something, and he lifted me up off my feet, tightening his restraint on me, and I passed out. My body was so full of adrenaline. He put me down, and I started to wake up, and I lifted him up. This is fight or flight, I’m a human being. I lifted him up somehow and I got free by way of a ghetto headbutt. They started hitting me and knocking me down and cuffing me. They took me to jail.”

Were you charged?
“There’s a funny story how it all ended; I knew the district attorney from being a child and she looked a little deeper into my case, and she found that this guy was totally in the wrong. My charges of up to five years for assaulting this police officer were dropped. Unfortunately, it’s on my record and does make things a little harder when I’m trying to travel or apply for anything federal, but you know what, they can see that this person did the wrong thing and I just reacted as a human being. I hadn’t shot him. I was just trying to get free. I’m not condoning this. I’m not saying go out and fight cops, but I am saying don’t let people threaten your life or your rights as a person. It was proven by the courts. If you took off his badge and took it human to human, what he did was wrong.”

If I’m The Devil… is released on June 10 via Epitaph Records.