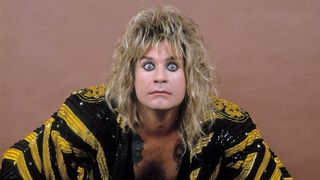 Ozzy Osbourne may be retiring from touring, but when he reflects upon his extraordinary life, he says he feels “blessed”, and no wonder. Born John Michael Osbourne in Aston, Birmingham, on December 3, 1948, he’s the juvenile delinquent who became a self-proclaimed “working class hero”; the convicted burglar who ended up a multi-millionaire; the alcoholic and drug addict who survived three decades of insane debauchery; the fat drunk who got booted out of the world’s biggest bands and ended up an even bigger solo star; the basket case who tried to kill his wife and is still married to her; the bat-decapitating, ant-snorting madman of rock now widely adored as a national treasure. “I’ve been very lucky,” he says.

In 1979, it looked like Ozzy Osbourne’s career was finished. Fired by Black Sabbath, the band he fronted for ten years, the singer had just turned 30 and was on the scrapheap, hidden away in an LA hotel room for months on end, steadily pickling his brain with booze and drugs. Sharon Arden was Ozzy’s salvation: the manager who revived his career, the wife who supported him through good and bad.

At the turn of the 80s, with American guitar prodigy Randy Rhoads at his side, Ozzy pulled off a miraculous comeback, only for the unthinkable to happen: during a US tour in March 1982, Rhoads was killed in a plane crash. Ozzy went on to make albums with other guitarists – Jake E. Lee, Zakk Wylde and Gus G – but did he ever match what he achieved with Randy on his first two solo albums? All is revealed as we assess every Ozzy album, from worst to best…

Originally included in the box set Prince Of Darkness, this collection of classic rock covers was a labour love for Ozzy, and he was fiercely proud of it. “Fucking blinding!” he raved. Few agreed with him. Under Cover limped to number 134 on the US chart and was listed in a magazine poll of the 50 worst albums of all time, alongside Robson & Jerome and the Crazy Frog. In fairness, Under Cover wasn’t a total disaster. A Beatles fanatic, Ozzy treated In My Life with reverence and had a blast with Mountain’s Mississippi Queen. But his versions of Sympathy For The Devil and All The Young Dudes were acts of vandalism far worse than pissing on The Alamo.

Ozzy had announced his retirement after the No More Tears album in 1991. Four years later he was back with a new album featuring his old friend and former Sabbath bassist Geezer Butler alongside Zakk Wylde, drummer Deen Castronovo (Journey/Bad English) and, on keyboards, the maestro Rick Wakeman. Ozzmosis was produced by Michael Beinhorn, famed for his work with Soundgarden and the Red Hot Chili Peppers. And Beinhorn’s modern rock sensibility worked well on the album’s standout track, See You On The Other Side, co-written with Lemmy. But despite the stellar supporting cast, this was one Ozzy comeback that fell flat.

Of all Ozzy’s live albums, this is the least essential. He had a great band in 2002, with Zakk Wylde plus ex-Faith No More drummer Mike Bordin and future Metallica bassist Robert Trujillo. Live At Budokan also features plenty of classic material, from opener I Don’t Know through to the inevitable finale of Paranoid. But there was nothing in this album that he hadn’t done better before.

At the time of its release, Live & Loud was billed as Ozzy’s final album – recorded on what was intended as his farewell tour. Ultimately, neither turned out to be true, but this album would have been a good note to go out on. His band featured Zakk Wylde, former Alice In Chains bassist Mike Inez and powerhouse drummer Randy Castillo, who died in 2002. The setlist across the double-disc set was perfect, with his greatest solo songs – Mr. Crowley, Flying High Again, Mama, I’m Coming Home, Crazy Train – mixed with Sabbath standards such as War Pigs and Paranoid. And for the encore, the mother of all heavy metal songs, Black Sabbath, was performed by the original line-up of that band.

Ozzy’s most recent solo album, released three years before the Black Sabbath comeback 13, saw him teamed with a new sidekick after so many years with Zakk Wylde. Greek guitarist Gus G (known to his mum as Konstantinos Karamitroudis) had made his name with as leader of power metal band Firewind, and had the chops to fill Wylde’s big shoes. Scream – originally conceived with the dreadful working title Soul Sucka – had some strong material in Let It Die, Diggin’ Me Down and Let Me Hear You Scream. But the Sabbath album that followed – Ozzy’s first with the band since 1978 – was his great late-career triumph.

Ozzy’s fifth solo album marked the debut of Zakk Wylde – just 21 years old at the time – and the return of Bob Daisley, the bassist and lyricist who had served with such distinction on 1980’s Blizzard Of Ozz, 1981’s Diary Of A Madman and 1983’s Bark At The Moon. The title No Rest For The Wicked was quintessential Ozzy, and so were songs such as Miracle Man – fast and heavy, with lyrics sending up the fallen televangelist Jimmy Swaggart – and Bloodbath In Paradise, a grim recounting of the Manson family killings, with an echo of vintage Sabbath in the opening riff.

When the final episode of The Osbournes was screened in 2005, the family was reportedly $85m richer. And it was time, at last, for Ozzy to get back to the more familiar business of making a new album. Released just 18 months before his 60th birthday – a worrying landmark for any rock ‘n’ roller – Black Rain was a surprisingly modern-sounding record, with an industrial-influenced production by Kevin Churko, whose previous credits included Britney Spears. The experiment didn’t always work: 11 Silver was sub-Marilyn Manson nonsense. But on the apocalyptic title track and the Axl-style power ballad Here For You, Ozzy proved he was still a serious artist, not just a mad old codger who swore a lot on telly.

Ozzy was still grieving for Randy Rhoads when his record label demanded a live album in late ‘82. His response was unequivocal: “I told them I’d deliver a live album, but it would have nothing to do with Randy.” The resulting album, originally titled Talk Of The Devil in the UK, featured Ozzy with his new touring band (guitarist Brad Gillis, drummer Tommy Aldridge and bassist Rudy Sarzo) performing a set comprised entirely of classic Black Sabbath material. Coincidentally, the Dio-fronted Sabbath released the live-double Live Evil at the same time, but Dio couldn’t sing Paranoid or War Pigs with Ozzy’s authority. And so, with an album he didn’t want to make, Ozzy claimed ownership of Sabbath’s greatest songs.

Grown met wept when Ozzy reunited with Black Sabbath in 1997. The band played to huge audiences all over the world. But rumours of a new album by the classic Sabs line-up were to prove unfounded. Instead, Ozzy produced his finest solo work in a decade. Down To Earth was a welcome return to form for Ozzy following 1995’s lacklustre Ozzmosis. Opening track Gets Me Through, powered by a thundering Zakk Wylde riff, has Ozz gleefully debunking his own myth: “I’m not the Antichrist or the Iron Man”. No Easy Way Out has the woozy psychedelic edge of late-70s Sabbath. And the ballad Dreamer, co-written by Foreigner’s Mick Jones, proved what an old romantic the so-called Prince Of Darkness really is.

Ozzy’s second and final album with guitarist Jake E Lee arrived at the height of the hair metal era. Produced by Ron Nevison (UFO, MSG), The Ultimate Sin had a slick arena-rock sound far removed from the bludgeon of vintage Sabbath. At the time, Ozzy even sported a Bon Jovi-style bouffant: “Liberace meets metal,” as he later put it. The Ultimate Sin is a flawed record, and the anti-nukes protest Thank God For The Bomb is frankly ridiculous. But it has two genuine classics: the huge, melancholy epic Killer Of Giants, and the brilliant single Shot In The Dark, a UK top 20 hit. Both rank among the best that Ozzy has ever recorded.

Replacing Randy Rhoads was an unenviable task, but in late ’82 the job went to Virginia-born Jake E Lee, formerly of LA hair metal bands Ratt and Rough Cutt (those double-Ts were all the rage back then). Lee had also worked, albeit briefly, for Ronnie James Dio, the man who replaced Ozzy in Black Sabbath, but Ozzy overlooked this indiscretion to pick Lee ahead of Dokken’s George Lynch. Lee made an impressive debut on Bark At The Moon, his flashy style best illustrated on the lunatic title track, its Hammer-inspired video featuring Ozzy as a werewolf. And if this album was no match for the two Rhoads-era classics, it kept Ozzy going. Given the circumstances, that was enough.

It was five years after the death of Randy Rhoads that Ozzy sanctioned the release of this double-live set, recorded during their final tour together in 1981. In a handwritten note printed on the album’s cover, Ozzy stated: “I have hesitated to release this album for many reasons, but now I feel that this is the right time.” Tribute is easily the best of Ozzy’s four live albums (five, if you count 1990’s six-track stopgap Just Say Ozzy), as illustrated by brilliant performances on Crazy Train and Suicide Solution. A studio outtake of Rhoads’ beautiful instrumental Dee adds a poignant finale. As Ozzy later said, “He was a hero, a true legend.”

The biggest selling album of Ozzy’s solo career is also his most adventurous. Ending a run of three patchy releases, No More Tears had Ozzy – by now an obsessive gym bunny – sounding revitalised, and guitarist Zakk Wylde hitting peak form. Pivotal to this album’s success was its monolithic title track, the best and most leftfield Ozzy song since Diary Of A Madman. Built around a throbbing bass riff written by ex-Alice In Chains man Mike Inez but rearranged and recorded by veteran Bob Daisley, it gave Ozzy relevance in the age of alternative rock, while Mama, I’m Coming Home (with lyrics by Lemmy) was a classic old-school ballad.

Ozzy’s first post-Sabbath band – himself, Rhoads, ex-Uriah Heep drummer Lee Kerslake and ex-Rainbow bassist/lyricist ‘Bomber’ Bob Daisley – formed such a tight writing unit that they cut two albums back to back in 1980. The second album, Diary Of A Madman, was released 14 months after the first, and is a genuine classic, with Ozzy in vintage form, rejoicing in his wild lifestyle on the self-explanatory Flying High Again, sticking it to The Man with heartfelt emotion on You Can’t Kill Rock And Roll, and wailing “Sanity now is beyond me!” on the title track. The latter, a bizarre gothic metal masterpiece with neo-classical flourishes, is Randy Rhoads’ crowning glory. But as Ozzy later mused, “He was only just beginning…”

Ozzy described the first time he heard Randy Rhoads play guitar as “like God entering my life”, but for his former bandmates in Black Sabbath it was surely a more sobering experience. Rhoads was the most exciting young guitar hero since Eddie Van Halen – one in the eye for Sabbath’s old master Tony Iommi. This solo debut marked a new decade and a new era for Ozzy, and above all it was Rhoads’ cutting-edge style that gave the album its vital, contemporary edge. Blizzard Of Ozz (an inspired title) spawned several deathless Ozz classics: the deranged Crazy Train, the occult-dabbling Mr. Crowley and the lawsuit-inducing Suicide Solution. A triumph against all the odds, it remains the Double-O’s greatest solo work.