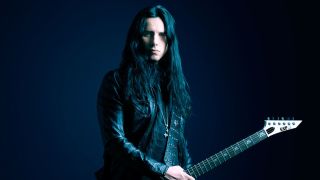 Although his technical chops have been called “jaw-dropping,” “supreme,” “hair-raisingly good,” Gus G insists that he doesn’t live by shred alone.

“It’s all about the music,” he says. “To me, great guitar playing goes along with great songs. I don’t need to hear amazing technical skills; it can just be some dude doing something cool.”

Gus points to Nirvana as such an example: “That’s fantastic music, but the guitar playing is mostly out of tune,” he says. “But that’s the vibe, and that’s how it should be. It’s punky and grungy. I don’t judge that music by how amazing the guitar solos are, whether the vibrato is spot-on or the picking is precise. Although I think Kurt Cobain’s solos are perfect for the songs – he puts across a vibe.”

Whether it’s Nirvana or any of his early favourites such as Yngwie Malmsteen and the Scorpions, the Greek guitar sensation sums up their common denominator in his world: They all inspire him to pick up the guitar. “It’s like I have no choice,” Gus says with a laugh. “When I hear a great guitar music, I have to play. I have to learn whatever it is I’m hearing.

“You know, some things come easily, and other times it feels like mountain climbing,” he elaborates. “When I heard Yngwie Malmsteen for the first time, I was like, ‘Oh, my God. How am I gonna do that?’ But I kind of turned it into fun. It was a struggle, but it was a good struggle. Sitting in my bedroom for 12 hours a day took a lot of dedication, but it was a fun kind of hard work.”

For guitarists of every stripe, from three-chord bashers or sweep-picking shredders, Gus imparts the following advice: “Figure out what you want to do and do it. If you just want to learn a few chords and you can’t be bothered with arpeggios and all that shit, fine – don’t learn ‘em. If you want to go all the way, do it. For me, I had to go there. It was like my mission, and it’s one I’m glad I took.”

Below, Gus G runs down his picks for five essential guitar albums.

“They created a genre we love – heavy metal. The first album of theirs that blew me away was Master of Reality, but I’m going to go with Paranoid because the riffs on it are so iconic.

“I remember picking up the guitar and learning the songs – Iron Man, Paranoid, War Pigs – and it was the coolest thing ever. It was an amazing sound, but it was something I could figure out right away. I don’t think you have to make something difficult to be groundbreaking, and that’s what Tony Iommi did. His riffs were really accessible. I imagine a lot of people, when they heard this stuff, were like, ‘Why didn’t I think of that?’

“This was the starting point of heavy metal. It all comes back to Black Sabbath and their early albums. It’s big, it’s grand, and it’s earth-shaking.”

“This is a live album. I kind of went back in time after I discovered Yngwie Malmsteen. In his interviews, he would talk about the people who influenced him – Hendrix, Ritchie Blackmore – and of course I knew of them. But he also mentioned Uli Jon Roth, whom I’d never heard of. I only knew the ‘80s Scorpions stuff, after he was out of the band.

“So I went back and listened to their ‘70s albums, and I was like, ‘God-damn! This guy was doing Yngwie before there was Yngwie.’ I was into a lot of the Shrapnel stuff at the time – Marty Friedman and Jason Becker all those guys – and I realised that this was where they got it from, all the diminished guitar runs and exotic scales. Uli Jon Roth was blazing that trail years before.

“But the other great thing is, the early Scorpions records combined A-class songwriting with A-class musicianship. Klaus Meine and Rudolph Schenker are both incredible, but when you put them together with Uli Jon Roth, it’s just ridiculous.”

“I heard about Al Di Meola from my dad. He was into this an album by a Greek singer – I can’t remember who – and Al had played on it. Also, the guitar trio record Al did, Friday Night in San Francisco, was really popular here in Greece. My dad turned me on to that stuff, and I thought it was incredible.

“People talk about shred guitar as if it’s strictly limited to the heavy metal genre, but Al was one of the first shredders. I think a lot of metal players took a lot from him – his picking style, and his fusion of rock and jazz. He’s a pioneer.

“Elegant Gypsy is one of Al’s best records. It’s got great guitar playing, of course, but it’s also a collection of amazing songs. It’s no secret why it’s stood the test of time and has become a classic. And I’ll admit it: I’ve stolen a lot of Al’s licks!”

“I go back and forth between Rising Force and Trilogy, but I think I’ll go with Trilogy. It was the first Malmsteen record I ever heard, and it was a huge revelation for me. I was like, ‘What’s going on here? Did somebody speed up the guitar, or is this really possible?’

“It was a true life-changing record for me. It had some pretty commercial rock – you had songs like You Don’t Remember, I’ll Never Forget – but there were also epic instrumentals like the Trilogy Suite. That was the big thing here in Greece: All the guitar players had to learn how to play it. And back then, there was no internet or YouTube; you had to find the shapes and learn how to fuckin’ do it on your own.

“I was no different. When I heard the Trilogy Suite, it became my mission in life. I locked myself in my room and said, ‘I’m not leaving until I’ve learned it.’ I think it took me a year till it started to sound like something even close to what’s on the record.”

“Passion and Warfare is the big Steve Vai record, but I’m particularly partial to an EP of his called Alien Love Secrets. Man, I was all over that record when it came out. I remember he put out a VHS tape of performances that went along with the record, and I watched that forever.

“I don’t know if you’d call Steve Vai a prog-rock artist, but I know he influenced so many prog musicians, people like John Petrucci. And he pioneered the use of the seven-string guitar, too, which a lot of people picked up on. There are so many subgenres of rock and metal – you’ve got the djent bands and such – and I think a lot of the players in those genres owe a big thanks to Steve Vai. He was doing what they do before there were even names for it.

“When I was 16, I auditioned for the Berklee College of Music. I had heard about all these amazing guitarists who went there, Vai and Petrucci and all those guys. The song I played for my audition was Tender Surrender, from Alien Love Secrets. I spent days and nights practicing it. I passed the audition, so I’ve got to thank Steve, as well.”