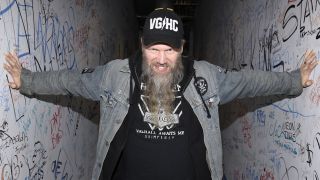 Who’s the biggest boozer in the band?

Back when we started that was actually one of the cool things about playing for us – that we could party! We used to drink a lot, but these days I’d rather sit with a small glass of really nice whisky than drink a whole bottle of shit whisky.

My house! I also recently bought myself a pool, which is pretty indulgent, I guess.

What’s the most ridiculous thing you’ve heard about yourself on the internet?

I don’t read about myself on the internet, period. People come up with the strangest things; I remember even my listing on Wikipedia was completely out there. And then you read people talking about your music on forums and it’s even worse. They’re saying all these things and it’s clear they’ve never even heard the record.

What is the strangest thing a fan has asked you to sign?

On this tour we’ve had quite a few prosthetics and wheelchairs. Then you have every body part that you can imagine: legs, tits, asses, you name it. Would I sign a male fan if he pulled his underwear down? Definitely not!

I never did any drugs, except for alcohol, but obviously there are occasions when you have bad alcohol experiences, too. I remember in 1997 the band went to a festival and to save ourselves some money we bought a 25-litre tank of watered-down industrial alcohol. We drank it and ended up freaking out. I had an episode where I was so pissed off at everyone I had to go and lie down and stare at the sky for about three hours.

Have you got any phobias?

I’m scared of heights. I have a slight hearing deficiency in one ear and my balance isn’t always perfect, and when you see the ground disappearing, it’s kind of affected.

We had a mother drop her son off and ask us to look after him. It was strange, he was a huge fan and we took care of him and tried to talk, but he stayed in the corner not talking and being nervous. Then afterwards he was on a forum calling us shitbags and saying we were stuck-up assholes!

What’s the worst fight you’ve ever been in and what was it over?

The last real fight I had was with this guy in the year above at school who was being really obnoxious and spitting at people. He spat in my friend’s face and I told him to cut it out, so he spat in mine and ran away. I caught up with him, spun him around and punched him in the face and he went down like a ton of bricks.

When were you last naked outdoors?

I have a sauna, so I’m naked when I use that and when I swim afterwards. Ted [Lundström, bass], I discovered, likes to cut his lawn naked. Thankfully I’ve never seen that, but knowing it has created some unpleasant mental images.

Have you got any tips for growing an awesome Viking beard?

What is the most memorable injury you’ve sustained?

I was stabbed once and with a sharpened letter opener, of all things. I was working at a supermarket and we caught a shoplifter: I grabbed him from behind and he stabbed me. It caught the hip bone, so it only went in about a centimetre, which was lucky as that could have been very unpleasant.

Have you ever injured yourself because you were drunk?

I went to a football game once and got quite drunk and when my team scored I climbed the fence. But then I lost my footing and put my hand through the spike on the fence and it was about six inches, from palm to index finger, and it went all the way to the bone. I was so drunk I was like, ‘Ah, it’s okay,’ but we had to go to hospital for stitches.

What would you do in a sinking boat?

Get to the fucking lifeboat! If there weren’t any lifeboats I would probably get myself a bottle of whisky and slam it. We have a Viking ship on our set now, but fortunately there’s no chance of that sinking…