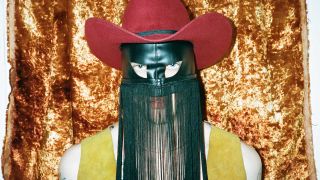 He's also a man who wilfully shares very little about his identity, meaning that details about his background are hard to come by – but if you imagine Johnny Cash plonked into an episode of Twin Peaks, singing songs about queer romance, you're just about there.

But his sound begins to make perfect sense once you learn more about his influences. Inspired by the champion songwriting of country legend Dolly Parton, the evocative tones of Roy Orbison, and with a youthful obsession for "weird punk-rock", his sound is a neat product of his influences, but one that sounds quite unlike anything else.

To celebrate the release of Pony, Peck guides us through the the records that shaped his tastes and helped to define his sound.

"I've always idolised 'The Man In Black'. This was the first Johnny Cash album I had ever listened to when I was a kid. It wouldn't be until I was much older that I would fully appreciate the groundbreaking elements of this incredible live album. Highlights include Jackson with June Carter, and the cheers from the incarcerated audience on Folsom Prison Blues, when Cash says he "Shot a man in Reno, just to watch him die'."

"An incredible mix of psych, folk, country, honky tonk, hard rock. I was always heavily inspired by the diversity of sounds and styles on Jefferson records. Listen out for when Grace Slick sneaks the word 'Motherfucker' into the backup vocals on We Can Be Together."

"X had a profound effect on me when I was growing up as a young, weird punk-rocker. I admired their ability to write fast punk songs but maintain a sense of incredible musicality. John Doe's baritone croon mixed with Exene's distinct pitched whine – just the best."

"Often known as the album that defined Dolly as a solo artist. My long love for Dolly Parton means that picking a favourite album or song usually proves pretty hard. But it's safe to say that I Will Always Love You will forever be my favourite. A beautifully written tune that took a rare personal departure, to include the sentiment of leaving her professional and personal relationship with Porter Wagoner, to pursue her own path to becoming one of the most iconic country artists of all time."

"Patti Smith made me think about music differently. Horses was the first album I ever bought myself and I can remember being struck with her lyrics. Patti has an incredible way of creating a visual story with her songs. I remember listening to it over and over because I wanted to memorise everything she was singing about."

"Merle is the epitome of a cowboy to me: tough and tender at the same time. Mama Tried is his remorseful title track about disappointing his mother when he was sent to San Quentin prison. The upside is that he saw Johnny Cash perform there while he was an inmate and it inspired him to be a musician."

"I have a soft spot in my heart for SoCal hardcore and punk, especially Descendents. Milo Goes To College is filled with fast, riff driven melodies and diary entry style lyrics."

"I got a second hand LP of Harvest for my 15th birthday from a friend. Neil Young's voice is so heartbreaking it almost feels unfair to listen to it at times. The Needle And The Damage Done is one of my all time favourite songs."

"I love a lot of different Sonic Youth albums, but Daydream Nation is pretty flawless from start to finish. 'Cross The Breeze and Hey Joni are two highlights for me."

"My favourite Orbison record – and one of his last. The small production elements and instrumentation on this album are so detailed and incredible. I could simply nerd out about You Got It, for hours alone."

Orville Peck's debut album Pony is available now via Sub Pop. Check out the video for latest single Turn To Hate below.