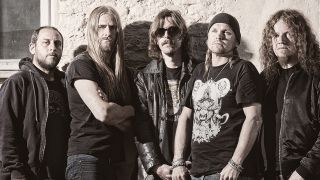 Sitting at 6,450 feet and looking like something from a dystopian science-fiction outback, Red Rocks Amphitheatre in Colorado is one of the most impressive venues on the planet. Garden Of The Titans, the new live DVD from Swedish juggernauts Opeth, captures their spectacular performance there last year, and talismanic frontman Mikael Åkerfeldt tells Hammer that it was quite the occasion.

So Mikael, you’ve got this new DVD coming out. What are your memories of performing at Red Rocks?

“It was freezing, it was very windy but it was so beautiful! The venue is really high up and I think you can see all the way to Denver. It was a beautiful evening and a beautiful amphitheatre but we were quite nervous because we were filming, of course. We’ve played some really nice venues and I can’t say what my top five is, but I think Red Rocks would be in there.”

This will be your fourth live DVD. How do you decide which show is going to be recorded?

“We had a discussion with our management about doing another DVD and Red Rocks was pretty much pre-determined. To be honest, I’m never really keen on doing them because of the amount of stress I feel before doing the show, but we hadn’t done one since In Live Concert At The Royal Albert Hall and we’ve done three albums since, so we figured it was a good idea to do it.”

You perform on the biggest of stages quite regularly now – does that make you nervous at all?

“It’s easier, to be honest. If it hadn’t been for us filming that show I would have been more calm than playing a pub – they are the worst kind of shows. I remember we played two nights, to make it even more horrible, in a tiny jazz club called Nefertiti down in Gothenburg where I had somebody’s face a couple of inches away from my guitar. They were just staring at my fingers when I was playing. The room held maybe about 150-200 people and it was so daunting. I was so nervous. On a bigger stage, when you are away from a crowd and it’s just one big mass of people, for some reason it just calms me down, even if those shows, on paper, are more important because there’s so many more people there. Like festivals: we’ve played Wacken and people are freaking out but I’m like, ‘Yeah, it’s a piece of cake, try a jazz club!’ Ha ha ha!”

Garden Of The Titans arrives two years after the release of your last album, Sorceress. Is this basically here to tide fans over until your next proper record?

“In the business world I think it’s not the most stupid move you can make, to put out a live album from the last tour when you are writing for the next one. I don’t think people are going to forget about us so I’m not too concerned with tiding them over, but I like to have good albums out. If we’ve got a good live album then why not release it for people? And in the meantime we’re working on the next album, so it’s come together well!”

Speaking of the new album, what’s the latest from the Opeth camp? Have you made a lot of progress?

“I have, actually. I told myself I’d be taking a break, maybe even a sabbatical or something, after the last tour but I think I lasted until after Xmas. I was definitely in the studio before New Year’s. I started writing in December last year and I’ve got a lot of music – I think I’ve got about an hour and a half’s worth of material, but I’m going to take it easy. I’m going to be very methodical and listen to a lot of stuff I’ve done and just make sure there’s no gaps of any kind on the next album. That feels important to me.”

Garden Of The Titans: Live At Red Rocks Ampitheatre is out now and available from Amazon.