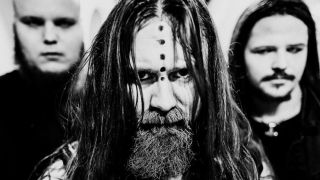 Norwegian metal guitarist Per Valla has been making a name for himself of late by demonstrating his inhumanly fast riffing technique on YouTube, and his band Vredehammer are no slouches either when it comes to face-ripping extreme metal.

With a third full-length, Viperous, due for release this March, Vredehammer are about to drop a new single, Winds Of Dysphoria tomorrow, Jan 10, but seeing as their riffs tend to open up a portal in the time-space vortex, we have managed to grab it for an exclusive preview right here.

Opening with darkwave synths and then going from zero to six six sixty in terms of sheer, sense-ravaging velocity, Winds Of Dysphoria’s classically frostbitten and chrome-plated rampage follows in the footsteps of bands such as Satyricon and Dimmu Borgir, mercilessly mugs them and then speeds off into the distance before they’ve fully gauged what the fuck just happened to them.

“This is one of the faster Vredehammer songs ever written,’ says Per, “made with the purpose of destroying everything in its path and leaving no prisoners.”

Adopt the brace position and get swept along in Winds Of Dysphoria’s slipstream below!