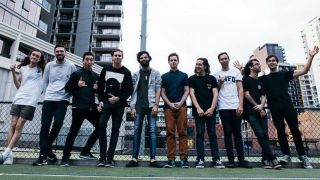 Northlane and In Hearts Wake

Aussie metalcore brothers In Hearts Wake and Northlane have joined forces for a new EP called Equinox. Within its 12 tracks, it highlights various important issues facing the world socially, politically and environmentally, so we chatted to both bands to find out how the project came together and what it means to them.

Both Northlane and In Hearts Wake are known for being socially and politically active, is that how this project came together?

Ben Nairne (In Hearts Wake, guitar): “It wasn’t the prime reason for the collaboration but once the decision was made to work together we definitely knew that the songs had to carry an important message that meant something to both bands. It’s not often that you find another band that’s as passionate about the real issues as we are, so to collaborate on this effort was special for both bands.”

Josh Smith (Northlane, guitar): “This project came together out of our friendship. We have been great friends since before both bands were even signed, back when we were sleeping on floors and playing to ten people a night. We always had wanted to collaborate on a project, the idea came to fruition at a barbecue we had with In Hearts Wake on a day off on our North American Node tour which they were also a part of.”

Equinox is about looking after the planet and the environment, what do you think can be done to save our home?

Ben: “I think the first thing we need to do to help our planet is raise awareness of the environmental crisis that our world is currently going through. We have the opportunity to spread a positive message to crowds through our music and even if just a few people from each show can take that message away with them, then they can make a huge difference.”

How involved are you in environmental activism?

Ben: “We have been involved in many organisations over the years that focus on looking after our environment for future generations to enjoy as we have. In one particular instance we set up a campaign where every physical pre-order of our album Earthwalker went towards planting a tree in a community in Western Australia. The campaign ended up planting an entire forest! It was incredible to see what we had achieved with the help of our fans, showing us all what is possible when you set out with a good intention.”

Refuge is about the current refugee crisis, a problem not many artists have addressed, why do you think that is?

Josh: “I’m not completely sure, I guess it is a relatively current issue and it takes quite a long time for an artist to roll out new material, so you might see some works regarding it in future. Maybe it’s too taboo for people to touch, I really don’t know.”

Ben: “Unfortunately it seems that a lot of bands these days don’t take the opportunity to spread a message of awareness or positivity through their music, rather they just talk about partying or something that doesn’t have any real substance behind it. There’s nothing wrong in doing so, but it definitely means there’s less bands out there that are willing to take on such a controversial topic.”

How is Australia being affected by the crisis?

Josh: “We’ve had a steady stream of refugees coming into Australia for as long as I can remember; from conflicts all over the world, not just the Middle East. The problem in Australia is fairly different though, the real contentious issue is the mandatory offshore detention of asylum seekers and the horrible way our government treats them, but that topic is another kettle of fish. I think if the world hurts, we all feel it, so we are all being affected.”

Ben: “We have asylum seekers travelling to Australia by boats looking for help because their countries are so badly poverty stricken or affected by war. Many of these boats never actually make it to Australia and sink in the middle of the ocean while carrying potentially hundreds of people, including women and children. If these boats do make it to Australia the refugees are taken into detention centres and held as prisoners because they have had no other choice but to flee their countries illegally in fear of death. Sadly many of these detainees end up committing suicide or dying in the detention centres because the facilities are so inhumane. It’s in a state of mayhem.”

Hologram is about destroying communities, do you both see yourselves as builders of community?

Ben: “I believe so, this project is a perfect example of that. It shows people that if we work together with others and keep our minds open to different ideas then anything can be achieved. We’ve been playing shows with Northlane since before our bands were signed to a label, and I think people see how much we enjoy touring together and want to re-create that community feel with other bands too.”

Josh: “Hologram isn’t so much about destroying communities, it’s about how fear is used to control people, and how horrible events can sometimes only matter to us personally when people we know are directly affected. I think music creates community and promotes harmony between people, so indeed we are builders of community.”

Why did you choose these issues to write about?

Ben: “It’s something that people need to know more about. There are horrible things going on in the world and some people are going through extreme pain and suffering, while others complain about their internet not being fast enough. Music is a very powerful thing and it gives us the perfect platform to spread an important message to our fans.”

Metalcore is becoming more and more crowded and competitive as a scene, is this EP an act of defiance against that?

Josh: “I guess you could say that, but it wasn’t our intention. We just wanted to create something memorable with our friends and do something different – work together rather than against each other. It’s something that’s really important to do as an Australian band because the odds are stacked so hard against us.”

Ben: “Actually I think it’s quite the opposite. Australia has a very tight family of heavy bands and we’ve been welcomed with open arms by international bands while touring overseas. If anything this collaboration portrays just how strong the scene is at the moment and that there is strength in numbers.”

Will we see you guys performing these songs live together?

Ben: “We are heading out on the Equinox Tour in Australia this June and will be performing the songs together live each night which is very exciting. I don’t know if both bands will be able to make it over to the UK together any time soon but if we did, we would do our best to make it happen.”

Equinox is out now, via UNFD.