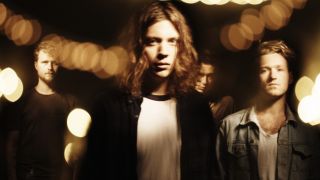 “There’s not really been a band, for me, that’s heavy but has got that kind of indie sound as well for a good few years now,” says frontman Mattie Vant. “I’m just making music that I want to hear, more than anything…”

Following the astronomical success of Royal Blood’s eponymous debut record last summer, we’re willing to wager the major labels have spent the last 12 months hunting for the next breakthrough rock band. And Parlophone Records may very well have found such an act in London-based newcomers VANT, whose raucous cocktail of melodic indie rock and raw frenetic punk is worthy of your attention.

VANT began as a solo project in Newcastle two years ago, where Mattie used to live. After moving to London with a view to kickstarting his music career, Mattie began managing the East London music venue Birthdays. There, he met guitarist Henry Eastham and bassist Billy Morris and the three workmates bonded over a mutual love of punk records and soon began jamming together in the venue’s basement. The line-up was completed when Swedish drummer Martin Söderin moved to the UK in early 2014, after accepting his friend’s offer to play drums for the band.

Their energised garage punk sound – which has already garnered the young band extensive airplay on UK radio and a support slot with Royal Blood at their Koko show – recalls everything from early rock ‘n’ roll pioneers like Chuck Berry, through to protopunk acts like The Stooges and MC5, and more contemporary garage rock bands such as The Vines and The Strokes.

“When I started I had a vision in my head of trying to sound somewhere between the Pixies and The Kinks”, he explains. “I admired Ray Davies and Frank Black as songwriters and I guess if I could think of a perfect band, it would be somewhere between those two. So that’s what I was aiming for, and I guess we added our own twist to it all.”

They recorded their entire first album independently, and once they had the material they started shopping tracks around to people they knew in the industry. As fate would have it, their debut single Parasite found its way to Parlophone Records. They put in an offer on the band within an hour of hearing the 80-second burst of dissonant noise, and this was before they’d even played a single gig. Mattie was so surprised when his manager called him to share the good news, he told him to “Fuck off!”

It’s refreshingly rare to hear of a band developing so organically in this day and age. Thus far, they’ve stayed true to their DIY roots, releasing their first double A side single independently in a bid to establish themselves as an self-supporting band with a vision. That vision, according to chief songwriter Vant, is one of social and political awareness.

“The thing that ties it all together is the passion in the lyricism and the fact that every song means something”, he says. VANT’s latest single The Answer is a fine example of this. It expands on the politically-agitated garage punk attack of the band’s previous singles Parasite and Do You Know Me, and addresses the media’s knack of stirring up fear. The song also questions the UK’s contemporary stance within global politics, which is a subject at the forefront of the band’s agenda.

“When I write music, I try and write about the world”, Mattie reveals. “I think a lot of people can get isolated in UK politics, and there’s obviously loads of horrific things happening in the UK. But I don’t really see myself as being English. I see myself as someone who exists on Earth. Borders were only created because someone decided to name a place at a certain time in history, once they’d dominated it and pushed other people out of that area. Until we start seeing the Earth as our home rather than the individual countries, it’s impossible for us to move forward.”

Moving forward as a band, VANT’s debut album is “basically finished”, with a view to releasing it early next year. But what of their long term hopes and goals…

“I’m still incredibly proud of our music and I want people to enjoy that first of all,” he says. “But hopefully they’ll have the interest from that to delve deeper into the lyrics’ meaning and become passionate about things that maybe they would’ve taken for granted before.”

VANT’s new single The Answer is released on August 21. For more information and details of their upcoming tour dates, visit their official site, www.wearevant.com.