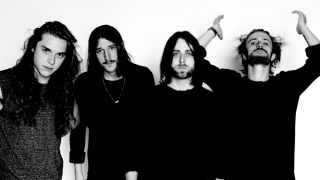 Ask any musician why they started a band and relatively few of them will tell you it was for all that sweet, time-consuming administrative work. Demob Happy – that’s them above – hate admin so much, they took matters into their own hands when they wanted to play Brighton’s Great Escape Festival.

“We were just sick of going through the application process online,” notes bass-basher and vocalist Matt Marcantonio. “We got a bit disenfranchised and began to see how the music industry works – nobody really gets picked through those online portals. We had the van and just thought, ‘Let’s put on our own gigs.’ We’ve always had a flair for the dramatic, so thought it’d be cool if we just rocked up, opened the van with Tom [Armstrong, drummer] already playing and us just climbing out. We got moved on after a few songs because we were causing a traffic jam and loads of bother… but it was funny.”

A little anarchy never hurt anyone. Actually, that’s a lie, but the sentiment’s there. Anyway, Demob Happy’s debut LP, Dream Soda, is now upon us. And it’s a beast. Initially, the dissonant guitars and grungy vocal lines hark back to Nirvana, but there’s much more going on here. There’s bits hinting at Supertramp, Queens Of The Stone Age and other nifty reference points. To call them a grunge band would be cheap and lazy.

“When we started out, we were doing 10 minute, Pink Floyd-esque, bluesy rock songs,” says Matt, detailing the band’s musical shift since starting as Geordie teenagers in 2008. “We decided to condense what we were writing into more palpable, three-minute songs. The grunge label has been applied to us because we’re doing similar things. Nirvana wrote catchy, Beatles-esque melodies inside short songs, dressing them up in a really aggressive way. We’re doing the same. I just want to write really memorable choruses and verses – because I’m a massive Beatles fan – and then, collectively, it comes across as upbeat, psychy alt-rock because that’s where the Venn diagram of our [the band members’] favourite styles meet. I’m fine with the grunge label, ‘cause it definitely applies to a few of our songs. But once people hear the album, I don’t think it’ll be so fitting, because there’s so much variation.”

Moving from Tyne and Wear to East Sussex in 2010, Demob Happy beavered away at this formula and results finally started to show. Earlier this year, they sold out The Haunt in Brighton. The 375 capacity venue isn’t exactly Wembley, but those tickets were bought on the strength of the band’s prowess as a live band. There was no album to learn the words from and sing along to. There was just a lot of noise. It’s visceral music. Vital music. Music that is, according to Matt, largely absent in popular culture.

“The general apathy represents a blandness in both personality and music,” he explains, coaxed by a comment about Ed Sheeran. “The way these people use chords and melodies is so unappealing to me. They just don’t touch the sides. It’s like going down a tunnel lined by your emotions. With stuff like The X Factor, there’s got to be a back story for you to feel any emotion when you listen to the music. People have a platform to make change and be positive, and it’s never used. It’s so difficult to get into those positions and it’s so easy to topple from that perch, so people aren’t willing to risk saying anything about the wrong person, because then that’s it. They just return to being a postman or whatever they used to do. The music represents that and it’s boring as fuck.”

For the most part, he’s bang on. In 2015, the music industry is a strange creature. For the fortunate few, it’s business. For most, it’s art. Ever-suffering art that doesn’t really pay the bills. The internet has destroyed all mystery, musical vanilla oozing through your fibre-optics and gently caressing your brain. Dream Soda’s opening track, Haat De Stank, takes aim at corporate bigwigs in boisterously blunt fashion. Beige radio rock this is not.

“I don’t necessarily need to share my feelings with people, so I was like, ‘What else is there to talk about?‘” says Matt, inadvertently following Nirvana’s approach of music first, lyrics last. “There’s things in the world that annoy and anger me, so I thought I’d talk about that instead! People need music to help come to terms with what’s in their brains. If I’m providing part of that, it’s still important for people to write about about love and all that stuff – I’m just not the man to do that! It’s important for people to realise that things are horrendously fucked and we need to do something about it.”

The human race has taken a misstep or two. There’s millions of kids who hear of Kanye West and Rihanna on a daily basis, but look at Paul McCartney and assume he’s a mortgage advisor who likes to play his guitar loudly on the weekend. Granted, they’ll never have suffered We All Stand Together, but they’re missing out. Vapidity chokes the airwaves and, if a band like Demob Happy could even pique the interest of today’s youth, Matt would be satisfied.

“I think it’s an ongoing discussion in people’s heads now: has music gotten worse or are we just saturating it? The attitude we had with the album was we didn’t want any second of it to be filler. We considered every single bar. We wanted it to have maximum impact; to be a challenge but also accessible. If it doesn’t do that – if it doesn’t touch the sides or have an effect on people – then we haven’t done our job properly. If it’s good, it’ll grow its own legs and carry itself.”

Demob Happy’s album Dream Soda is out now. The band will tour the UK in December. For more details, click here.