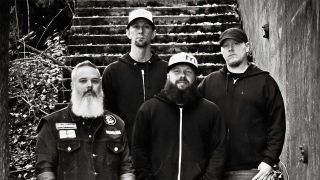 Sounds Like: A Dungeons & Dragons illustration springing to life

For Fans Of: The Sword, Ghost, Mastodon

Listen To: Season Of The Witch

Drawing on a love for primordial heavy metal (with a healthy side order of NWOBHM), Wolftooth aren’t so much paying homage to the 70s as building a temple to it, offering up a smorgasbord of chugging riffs and doom-tinged tones that would do Tony Iommi proud.

“It’s hard to write music like this and say that Black Sabbath aren’t a huge influence,” admits vocalist Chris Sullivan. “But at the same time, we didn’t set out to emulate anybody – I got together with terry [McDaniel, bass] a little over a year ago and started writing music. What came out, came out!”

They might be less than a year old as a unit, but for over 25 years each member of Wolftooth has toiled away in the underground, charting the changing face of metal as they played in also-ran bands like Shroud, Warhound and Kramus, playing in every subgenre from death metal to hardcore. Their successes were limited (“Jeff [Cole, guitar] and I were in a band called Darknes in the 90s, when death metal was huge. We recorded an album at Morrisound Studios, which was pretty awesome,” Chris says) but the dream of recognition and success never truly died as the members doggedly pursued their passion. Then, in a twist of fate straight out of a movie script, just as they accepted that success might never come knocking, they landed a record deal.

“Honestly? With Wolftooth, we weren’t even sure that we’d do anything with it!” Chris laughs. “We’ve all been in bands before and it seemed like every recording we did, we were looking to get signed and make something happen. This one, we weren’t; we just wanted to make music we could be happy about. We didn’t shop the record at all; a local radio station managed to get hold of our EP and got it out to cursed tongue records. They liked it and asked if we wanted to release it through their label. It just kinda blew up!”

Finding a home predominantly in the stoner and doom camp, Wolftooth’s debut record goes big on the art of the riff, its 42-minute runtime spread across eight tracks of gloriously bombastic heavy metal. At the heart of it all is a sense of escapism, their lyrics detailing a fantasy landscape populated by gods and heroes, witches and demons.

“Music should offer an escape,” Chris says. “In other bands I always wrote about personal experiences, but people can’t always necessarily relate to those. Fantasy lyrics engage people, taking them to places they might not otherwise go.”

For Chris, this isn’t just a band being colourful with their imagery – it’s a crucial aspect of why he plays music in the first place. “We all have regular lives, 9-to-5 jobs,” he explains. “And regular life can get you down – especially if you don’t have something to release your stress and angst. I remember whenever I would have a bad day at home or school or whatever, I’d go to band practice and it would all melt away. that’s what this does for us now – when we’re stressed out, we go to band practice and let it all out.”

For Chris, Wolftooth represents the achievement of a three-decade quest for recognition, his journey beginning when he was 14 (“I’ve been playing metal for a long time – I’m now 44!” he exclaims). But, while he might be closer to his goal, he admits that the journey is far from over and the dream is very much still alive.

“Dreams change over time. When we were younger, the dream was to be able to tour the world and earn enough money to sustain ourselves. Now the main thing is to write good music we enjoy. We’ve never been in stoner or doom bands before, so this first record was experimental. In future, we might go more progressive. We’re not gonna count anything out – wherever the train goes, we’ll jump on and ride it out.

Wolftooth is out now via Cursed Tongue Records/Blackseed