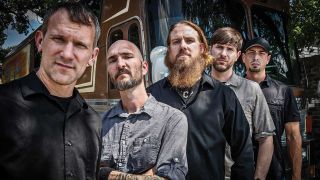 Texas has long been a hotbed for guitar godliness. Whether it’s through the vintage blues of Johnny ‘Guitar’ Wilson, the timeless swagger of Buddy Holly, the gritty rock’n’roll of Billy Gibbons, or the game-changing heavy metal majesty of Dimebag Darrell, there’s something in the Lone Star State’s water that’s made it a breeding ground for six-string sensations. As they ride off of the momentum of their brand new debut EP, We Are, Runescarred are already displaying all of the skills necessary to join their homeland’s impressive roster – not least because of their impeccable musical education.

“I went to the Berklee College Of Music and I still owe a lot of money to them,” smiles the band’s lead shredder, Tim Driscoll. The esteemed Boston university has spawned a plethora of lauded aural magicians, from Mike Portnoy and John Petrucci to Steve Vai. “I have an expensive piece of paper that says I know how to play guitar!” he adds with a grin.

“Tim brings a different level of playing to the table,” frontman Ven Scott explains. “We stopped being afraid of [working in] progressive elements.”

With Tim’s college-educated savagery at the forefront, Runescarred dub the music of their new EP “progressive groove metal”. The three-song snapshot mightily melds the NWOBHM-like grandeur of harmonic lead guitars and operatic vocals with a fury ignited by guttural rhythms and breakneck pacing.

“The thing I love about rock’n’roll and classic metal is the drama,” Ven says of their dynamic approach to songwriting. “Growling and screaming have their place and are a perfect fit for myriad bands but, for me, it’s started to get boring. So, with Runescarred, I decided that if the song calls for growls, it’ll get them, but, by and large, to tell my stories lyrically, melodies have served me better.

“Plenty of times I will listen to something and go, ‘That needs a little more ‘Halford’,’” he continues. “I wouldn’t consider us ‘old-school’, but I think we could definitely hold our own if we were to ever run onstage with Maiden or Priest.”

Would they feel comfortable mixing it up with younger bands, too?

“We would fit comfortably on any metal bill that wasn’t exclusively Sabbathy, sludgy stuff,” Tim enthuses.

Runescarred’s increasing arsenal of high-energy and generation-bridging metal anthems gives the quintet an adrenaline-driven edge in the world of heavy prog, as more bands push their songwriting to more expansive realms.

“We’re flashy where we need to be,” Ven summarises, before Tim likens their streamlined brand of thrashing experimentation to “a prizefighter getting lean and dropping a weight class”: “We’re more traditionalist compared to something like Periphery or Animals as Leaders,” he concludes. “But we’re still as intense as anyone else out there today. There are more acoustic parts and it’s just as technical.”

Providing a quintessentially modern twist on the grandiose bombast of metal’s earlier glory, Runescarred effortlessly complement swanky technicality with the inherent excitement of enticing choruses and skull-rattling speed. It’s a mix that should see them fly up metal’s ranks.

Runescarred new EP We Are is out now.