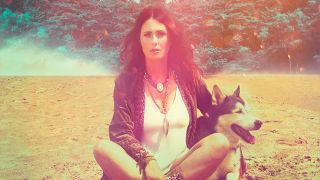 Fronting one of the world’s biggest symphonic metal bands not only requires a decent set of pipes but a vivid imagination, and when you’re staring your seventh album in the face with no lyrical ideas to speak of, it’s a daunting challenge. And that’s just what happened to Within Temptation's Sharon Den Adel. Following the epic Hydra tour, Sharon wanted to start writing for Within Temptation again right away, but there was no inspiration, and writer’s block set in.

She decided to take some distance from the band to see what words and music came naturally… but it wasn’t Within Temptation.

“Within Temptation is powerful music, and that’s not what I was feeling at the time, I wasn’t feeling very powerful,” Sharon tells us, over the phone from her home in the Netherlands.

“My dad got very sick and it made me think about how I want to spend the next 20 years in music, and what do I want to do with my life. Within Temptation is like a rollercoaster, it’s like a train that goes on and on, there’s always some super-cool thing that’s happening on our path, and every time I feel I have to do it because I love it.

"On the other hand, I’ve missed things in my personal life, everybody is getting older, kids are growing up, parents are getting older, things like that. You have to make very obvious choices about getting a balance in your life. Those kind of questions came up a lot and in that process I started writing music again. I don’t really control what comes out when I’m writing or what I’m feeling like right now. I need to deal with these kind of things, I need to give it a face and a voice, and that became My Indigo.”

The project's title, My Indigo, came from the colour that Sharon felt when she was writing the record.

“I always think in colours, which is a bit strange, but when I get to know a person well enough they get a colour in my head,” she says. “At certain times, how I feel, that gets a colour, and indigo was somehow the colour of my mood. And it sounds pretty cool I think ha ha!”

So, under the guise of My Indigo, Sharon Den Adel created a 10-song self-titled album of accomplished, intelligent pop music. But this isn’t saccharine sweet like Little Mix or Ariana Grande, Sharon is channelling her love of the ‘80s into something more akin to Kate Bush, Florence And The Machine or even Lorde.

But what is Sharon’s relationship with pop, who is this album for, and what is the record actually about? We find out.

The record sounds like it’s full of love songs. Was the album for someone in particular?

“It’s not love love songs, for your partner or anything, it’s about love for people who are important to you and the relationships you have; the hardships and the journey to get out of the bad place and to get to a better place together. Pulling each other through a certain period in your life – that’s what this album is about. It’s not typical love songs, but it is love that you feel for people who are important and close to you.”

It’s known that you’re a big fan of Kate Bush, but this sounds very much like a pop record. Are you a fan of contemporary pop?

“I like all kinds of music. My heart and soul is in metal and rock music, but I’ve always liked all kinds of music – I’ve loved Bob Marley since day one and I love Kate Bush. I was never able to do anything with that, although we did a Kate Bush cover once. I grew up with 80s music, and it’s about my youth, it’s about my time with Within Temptation, and it’s about a long period of my life I need to look back on and deal with. I have a big love for 80s music because that’s the time I grew up. It made a huge impact on the way I write music today, also for Within Temptation. I just wanted to give myself the time and freedom to write whatever I wanted to write, and this is what came out.

“It’s not a record that I wrote for anybody else, it’s a record I wrote for myself. I don’t need anybody to like it. If people like it, I appreciate it, if they don’t then that’s fine. But this was something that was in the way and I’m glad that it happened because I could have burnt out and had an even bigger impact on the band. Music has always been my catalyst and my way to deal with life in general. Listening to music, playing music, making music, it’s always music, and the fact that I lost it for a certain time was the worst thing that could happen to me. I’m glad I’m able to make music again, it’s such an important thing.”

Musically there are so many layers to it, there’s so much going on with all these whirrs and bubble noises. How involved were you in the instrumental side of it and all the tweaks going on?

“I must give a lot of credit to Daniel Gibson who I wrote this album with. It’s like I was searching for a certain sound. You don’t want to make an 80s record by definition; you want flavours from the past but also about how you feel now, and I wanted to have all those elements in the music. We’ve been writing together since 2003, so it’s been a long journey. He was expecting me to write Within Temptation type songs but then I came out with this, and we just decided to see where it led. It was really nice and I’m really happy we could do that together – it’s not just a working relationship, after so many years it’s also friendship. It's about understanding what you need from each other and he helped me a lot with that.”

That 80s flavour seems to be influencing a lot of contemporary pop – Lorde, Halsey etc. Were you listening to these modern artists or trying to do your own thing?

“I think a lot of people are inspired by the 80s because it was a very rich time with certain melodies and stuff happening. For me, it’s such a source of inspiration. When you’re a child you suck up every type of music like a sponge, you feel the music so much more intensely as a kid trying to understand life and everything, and that’s where you’re made, where the core of everything lies. Looking back on my own past and things that happened, I had to go back to that. I remember Fleetwood Mac, I remember Kate Bush… it was such a natural flow of inspiration.”

Are you expecting My Indigo to be embraced by Within Temptation fans?

“You start with the people that know you already, of course, so I think there will be a certain part of Within Temptation fans who check it out. It’s difficult to reach a new group of people, but this doesn’t need to be a huge success, I’m happy that anyone listens to it and it gets played. I just hope it reaches the people that might like it but it’s not necessary.

“Here it’s been played on the radio, which is a huge complement to me, Within Temptation will never be played there because they’re too heavy. It’s getting out there and it’s being shared. Often I hear that Within Temptation is too heavy for people, and this is of course more indie-pop, not pop that’s usually on the radio. I think it’s bit more complicated kind of pop music ha ha!”

My Indigo is available to buy now on Amazon.