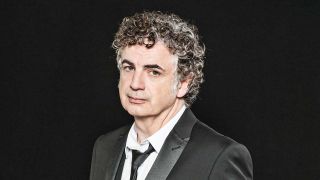 King Crimson guitarist and singer Jakko Jakszyk talks with rare enthusiasm about his own band, but it's to be expected: he'd been a fan for four decades prior to becoming a full-time member in 2013.

"It's all too easy to get kind of cynical, especially in the music industry," says Jakko. "I've been through it all, and it's very easy to lose sight of what it was about music that excited you in the first place.

"So to be given an opportunity to revisit that feeling as a member of the band you loved as a kid is mad, isn't it? And I don't lose sight of how mad it is. It's like something out of a dream made flesh."

This year, King Crimson celebrate their 50th anniversary with a series of reissues, a new documentary, a reprint of Prog writer Sid Smith's acclaimed biography of the band, 50 special digital releases, plus new merchandise and more.

In the Wake of Poseidon

"I bought In The Wake Of Poseidon in the record department of the local Co-op. I guess it must have just come out, and it had a sense of of grandeur, mystery and other-worldliness. What appealed to me back then was that it didn't seem to have the transience of pop music. It was much more serious and in-depth, and took you away to some other place.

"It's a track that's not often mentioned, but I think the title track from In The Wake Of Poseidon is beautiful. It's got this enormous sweeping panorama, with some amazing acoustic guitar work from Robert. And the middle section is just stunning."

Larks' Tongues In Aspic Part I

"We'd been on a school trip, and when we came back I remember going to the record shop and buying Larks Tongues In Aspic, then racing home to listen to it, with the rain outside.

"The opening seemed so exciting, and so unlike the previous King Crimson records, with the sound effects and spoken word sections that Jamie Muir [percussionist] put in. It was really exciting."

"The first version of the band I saw live was in 1971, when they were promoting Islands. And Sailors Tail was just... well, even now when we play it live it's a fantastic moment, with the two overdubbed guitars that we're now able to replicate.

"Again, it was really exciting, really original, and really unique. It's instantly recognisable as Robert [Fripp] and as Crimson. There's the dark mellotron brass that comes in, and Robert's amazing guitar solo, which is like a psychedelic version of Scotty Moore, like a slapback guitar, but a mad, weird, quasi-atonal version."

"It's this stunning mixture of free jazz and brilliant orchestral composition. We've started doing that live and it's an amazing thing to play.

"It's got all this light and shade with these beautiful contrapuntal parts, and yet there's this big heavy riff from the mellotron brass. I love that!"

"From Red. Again, same thing: very beautiful, with an incredible, lovely and elegiac melody that Robert plays at the beginning.

"In the late 60s and early 70s I had a next door neighbour who was two or three years older than me, which is a significant thing when you're that young. He'd been playing me bits of music, and one day he played me a track from an Island Records sampler. It was called 21st Century Schizoid Man.

"It was extraordinary on lots of levels: the way it sounded, the distorted vocals, and of course the mad, fast, running lines. It just completely blew me away."

"It's an amazing tour de force of Robert's, an incredibly difficult cross-picked piece, but it's got this amazing form to it, and an amazing sense of dynamics.

"It's something we play live, and it's such a satisfying thing to be standing next to Robert as he plays this notorious – almost impossible to play – cross-picked piece. Incredible."

"I remixed Thrak for the recent reissue – mixing it in surround sound. And One Time is a lovely, haunting ballad."

"It's the blueprint for the whole double guitar gamelan thing Robert came up with. On one level they're almost like interlocking exercises, but the way they're repeated and cycled – and how they move harmonically – they become this really trance-like, beautiful thing.

"It's like that kids' toy, the spirograph. You create mathematical drawings, and after a while they intertwine to become this rather beautiful thing. And again, it's very unique. No one else made music like that."

"I've chosen this partly because we do it live, and it's a great thing to play. It's got a whole improvised section in the middle, which goes wherever it goes, and some nights see it take on a whole new life of its own.

"On the album [Larks Tongues In Aspic] it's just got a great vibe, with the little mad sound effects that Jamie Muir is using as part of rhythm track."