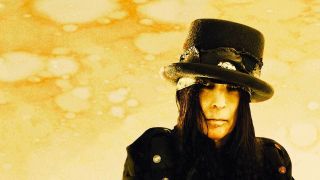 One of the more underrated hard rock/heavy metal guitarists to emerge in the 1980s was Mötley Crüe’s Mick Mars. While shredders such as Joe Satriani, Steve Vai, and Yngwie Malmsteen were getting the lion’s share of coverage in guitar magazines, Mars’ lead work on such Crüe tunes as Looks That Kill, Smokin’ in the Boys Room and Girls, Girls, Girls undoubtedly led to some vicious air guitar enactments in the bedrooms of headbangers worldwide.

Since Mötley Crüe called it quits in 2015 after a lengthy and successful farewell tour, little has been heard from the mysterious Mars. But he was willing to take a break from recording new music to count down his life-changing albums.

"Probably my favourite. I think that’s when Jimi started becoming a real songwriter. By the time of his Are You Experienced? album he was getting the feel of it, although maybe he was still a little embarrassed about his singing.

"Hearing his stuff on Axis was him going to another level of his talent. His playing and writing was getting better. By the time they reached Electric Ladyland, with all that jamming and craziness that was going on, it was way over the top."

"I really like Truth. I know him and a certain other person [Rod Stewart] in the band didn’t get along too well. But Truth was a great album. And when he was doing stuff with Terry Bozzio (1989’s Jeff Beck’s Guitar Shop), it was amazing. Some of the stuff he was doing was kind of like pulling stuff out of the air. Very cool."

"That whole album was new and different and fresh. All I had heard at that point in my life were stupid songs like Surfing Bird and that kind of stuff. And I heard this record and I went, “What?!”

"I was into blues and a lot of stuff like that - Butterfield and Bloomfield and all those guys. I was growing and moving on and discovering people, and Rave Up was the first album that I believe Beck played on, after he took over for Clapton."

"Eric Clapton is very true to what he is, which is a bluesman. He’s very good at it, and I admire him a lot for that, and for sticking to his guns. Cream showed another side of him, and then he got back to his roots again. Disraeli Gears was one of my favourites."

Derek and the Dominos - Layla and Other Assorted Love Songs (1970)

"Clapton had lots of good people on there, including another influence of mine - Duane Allman. I was just going “Wow.” It had a lot of people and different big names and not-so-big names. It’s kind of like Electric Ladyland - it was a bit ahead. Nobody was doing that.

"Eric was the first that came out and did a full-blown “I’ve got a new recording studio and I’m going to invite Duane Allman and this person and that person, and just have a great time, and whatever comes out…” Like I said, like Electric Ladyland - it was right there, right then."

"My very first favourite guitarist ever - and he’s still one of my favourites. He influenced me so much. He was my first real blues guy, because I was sitting around playing Ventures and stuff like that. But it wasn’t until Michael Bloomfield came around that I learned to bend strings.

"After Electric Flag, he turned to more country kind of stuff, and that’s when I started losing interest. And then the next thing I know, he had died [from a drug overdose in 1981, at the age of 37]."

"That’s a great album. I don’t think there’s a bad song on it. They’re all great. And I used to have to play a few of those in top-40 clubs when I was growing up and learning how to play with other people.

"I got into a halfway decent band that knew how to play instead of just stumbling around on their instruments, so that was an amazing record. It still is - I still listen to it a lot."

"I’ve watched documentaries about that record, and Miles Davis wanted to play Machine Gun with them. And Buddy Miles… I think Jimi was a little bit intimidated by Buddy because of his voice. Jimi didn’t like his own voice so much, whereas Buddy Miles had an amazing voice."

"I like Jimmy Page quite a bit, learning from him in particular about tone. He’d play with different tones and mess with stuff and do things that were just like, “Huh? OK!” Pagey was amazing with all he did - experimenting and playing guitar with violin bows.

"He was the first guy to ever do that and made it work. People nowadays that try the violin bow on a guitar and it doesn’t work. I think they forgot the rosin or something. I like Led Zeppelin II. Yeah, I like the band a lot."

"You want to hear something weird? Frank Sinatra! It had It Was a Very Good Year and all that kind of stuff. I’ll have to sync it in with Billie Holiday - the way that certain people, whether they’re crooners or whether they’re singers, when they play or sing behind the beat, just slightly behind it, I go, “That’s really cool.” Because everybody’s always ahead of it.

"There’s just something about the way he sings, the way Billie Holiday sang - they’re so laid back and behind the beat, but then you catch up. Nobody is doing that anymore."