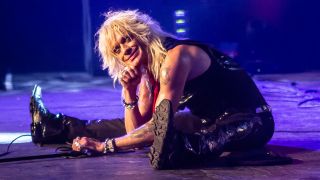 The first band Michael Monroe ever saw live was Slade in 1972. His second was The Sweet, right after the Sweet Fanny Adams album. "I snuck in for nothing," says the former Hanoi Rocks frontman, "because I was so tiny, and was blown away."

With such glittery beginnings it's little wonder Monroe went on to carve out a career of one of glam rock's true giants, influencing more than one generation of musicians, including Guns N' Roses.

Below, Michael Monroe picks the 10 Records That Changed His Life.

"He’s the original creator of rock’n’roll and my biggest hero. Still the best rock singer of all time. I started learning to play saxophone to songs by Little Richard and The Coasters."

"Little Walter is in my opinion the best blues harmonica player of all time. He was a pioneer, and listening to his playing still blows me away."

Little Steven & The Disciples Of Soul - Voice Of America

"This song and the entire album by the same name made a lasting impression on me. The lyrics make a strong statement, as in every song of the album, and this was a great inspiration to me when I was starting my solo career and was really coming onto my own as a song writer."

The Lords Of The New Church - Open Your Eyes

"'The truth is the sword of us all” was written on the back cover of the first Lords Of The New Church album. Like Little Steven, Stiv Bators was saying things as they really are, and that’s what I wanted to do too when I went solo after the demise of Hanoi Rocks.

"I was a big fan of Stiv Bators, especially after his Disconnected solo album and while living in London I got to know him very well and eventually he became one of my dearest friends ever."

"Stiv Bators' previous band, the Dead Boys was also a big influence on me and Hanoi Rocks. The song Ain’t It Fun was especially a cool one with a chilling statement in one line of the lyrics: ”Ain’t it fun when you know that you’re gonna die young, it’s such fun…”.

"In the early 90’s I went to L.A. to play some sax and harmonica on the Guns N’ Roses Use Your Illusion album on the song Bad Obsession. Some time before that Stiv Bators had passed away after being hit by a car in Paris.

"I had made a tape of the first and second Dead Boys albums to give to Axl since he had told me that he wasn’t that familiar with their material. We were listening to that tape in his car, driving around Hollywood, and when Ain’t It Fun came on Axl said 'I love this song! Let’s record it as a duet for our upcoming cover album [The Spaghetti Incident?]'.

"So he called Slash and got the band together for this in the studio and we recorded it the next day. It was magical! We sang it face to face, surrounded by burning candles, which was part of a 'ritual' Stiv used to do with me when doing vocals in the studio. Stiv’s spirit was definitely with us, and in places Axl’s voice sounds just like Stiv, especially in the line 'Ain’t it fun when you feel like you just gotta get a gun'.

"I was so excited since this would be such a great tribute to Stiv's memory and millions of people would see his name on the album cover as Axl promised that they would add 'In memory of Stiv Bators' in the credits of the song. I couldn’t think of a better homage to my dear friend.

"I had a completely useless manager at the time and when he heard about this collaboration and that the song was going to be the first single off the album, he saw dollar signs and told me 'I can negotiate a very lucrative deal for this', but I told him: 'You’re gonna stay the hell away from this. I won’t let you ruin this thing,' because I didn’t want to do anything that might cause GN’R to change their minds about having the song on the album, especially money, or me coming across greedy or something.

"I had noticed already back then how so many people in the business - even musicians - looked at GN’R as the 'Bank Of Guns N’ Roses' and wanted to take advantage of their success and fame. I thought that was pretty disgusting. So all I asked for featuring on the duet of that song was that they put on the album cover 'In memory of Stiv Bators' in the credits of the song and just spell my name right. And that’s what they did. I’m very happy and proud about that collaboration."

"Bon Scott was and is a hero of mine, and these lyrics truly sum up the reality of being a rocker in a rock’n’roll band. This song and the whole High Voltage album just reconfirmed my decision to become a rock’n’roll singer."

Mott The Hoople - All The Way From Memphis

"This one – in a similar way as AC/DC’s It’s A Long Way To The Top – describes being in a Rock band in very a cool way, and the sax solo is outstanding, not to mention the guitar solo. Ian Hunter is a genius songwriter and absolutely one of my biggest idols.  And Mott The Hoople was absolutely one of the greatest bands ever!"

"Another one of my biggest and coolest idols is Alice Cooper. The Love It To Death album was the second rock album we got in my family when I was a little kid. The combination of these two songs – with the demented character Alice portrays so amazingly – made a huge impression on me.

"I even took this album to school to play these songs to my music teacher, and although she was a sworn supporter of classical music, much to my surprise she got this and thought it was a great work of art!"

"Cheap Trick are one of the greatest bands of all time, right up there with the Stones, etc. Their first album has a nice trashy, almost punky kind of sound, while still having great melodies and a Beatles type of quality in songwriting.

"Robin Zander is one of my Top 5 best lead singers in the world. And Tom Petersen is a bass player totally in his own league. I still use his bass sound as a reference when mixing our records in the studio.

"At the Hanoi Rocks gigs we used to play this song live and it always worked great."

The Undisputed Truth: Ball Of Confusion

"One day as a young kid in Helsinki in a second hand record shop I found an album that had five black people on the cover. They were floating in space with platinum white afros, silver painted faces, silver suits and platform boots with mics in their hands with neon coloured mic chords.

"The album was called Higher Than High and the band’s name was The Undisputed Truth. I thought 'this must be something else' and bought the record. It turned out to be some of the coolest funk music ever with great lyrics too. This song Ball Of Confusion wasn’t on that album but I discovered it later when I found more of their music on other records.

"It makes a strong truthful statement about life on earth and has a hell of a groove. Other artists have covered this song as well, but I think this is the best version of it. Norman Whitfield produced their records as well as the Temptations' psychedelic-era albums.

"The Cosmic Truth was another good album by them, and the 'Best Of' collection. This was in the early 70’s. I think their biggest hit was Smiling Faces Sometimes. This is one of my favourite bands, and every member of Hanoi Rocks loved them too."