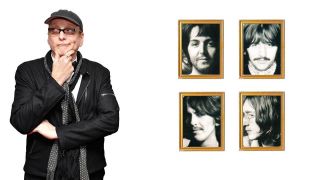 Like so many fellow musicians of a certain vintage, Rick Nielsen of Cheap Trick first saw The Beatles on The Ed Sullivan Show in 1964.

“They completely changed music, especially in America,” says the guitarist. “They changed me, too. Until that point I was a drummer. But I became a massive fan; I had the single of Please Please Me a year before anyone else in the States had even heard of the Beatles.”

And as for picking his Top Ten by the band?

“Holy cow! That’s next to impossible; they have close to four hundred songs!”

So Rick stretched the rules a little, and we indulged him.

Like a lot of these songs, we have played this one – err… these three! – live. We did it about a hundred times, in fact, in Las Vegas and New York. It was an encore in our Sgt. Pepper Live show. The YouTube mash-up of Paul McCartney, Cheap Trick and a lot of other people playing it together is pretty cool.

Lucy In The Sky With Diamonds

That one has so many different moods, which makes it difficult to play – at least it did for me because I’m more of a studio musician [laughs]. It’s on our Sgt. Pepper Live album and DVD.

Again, that was on our Sgt. Pepper Live album. I especially like the reprise at the end. That’s pretty cool.

A Day In The Life

It’s the song that closed the original album, Sgt. Pepper’s Lonely Hearts Club Band. That big chord at the end says it all. When we did the All Shook Up album with George Martin, we finished it with an ‘E’ on a loop. Working with George was such a great honour.

We Can Work It Out

I love that one because there are different sections; there’s pop, there’s heavy-duty minor chords and major chords. In terms or arrangement it has a lot of twisting and turning, I really like that.

We didn’t do that one, but I wish that we had [laughs]. I love the drum beat.

I like the rawness of the guitar parts, and of course there’s the version [performed at The Rolling Stones Rock and Roll Circus in 1968, billed as The Dirty Mac] which featured Lennon with Eric Clapton, Keith Richards and Mitch Mitchell.

Cheap Trick had a song called Taxman, Mr Thief [from the band’s self-titled debut] but of course they were two different songs. I had the IRS chasing me for a number of years after that little misunderstanding [laughs].

She Said, She Said

We did a cover of that song for a Howard Stern album. I liked what we did with it, it’s fun. The minute I hang up on you, all of these choices are going to change.