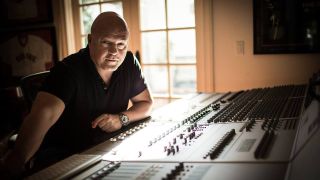 Long before he was “The Commish”, or “Thing” in The Fantastic Four or most famously Detective Vic Mackey in The Shield (for which he won a Best Actor Emmy in 2002), Michael Chiklis was a drummer and singer – and an obsessed classic rock fan.

“I absolutely lived rock‘n’roll growing up,” Chiklis says. “I played in bands my whole life. Whether I was listening to music or playing it, I was always transported to a happy place. Everything else falls away, every bit of stress. It’s almost like a drug, but it’s a good drug. And I still love making music, every bit as I did as a kid.”

Chiklis released his debut album, Influence, in 2016. As its title suggests, it reflects to the music he grew up loving. “I wanted to make an aggressive and authentic rock record. This is no vanity project, either. I’m not one of those actors going, ‘I can be a rock star too!’ I’ve been playing music forever, so I wanted to take the opportunity to record some songs that I wrote and get ‘em out there.”

On Influence, Chiklis tips his hat to one of his biggest musical heroes, David Bowie, on a spirited and reverent rendition of Fame. Although he recorded the track in 2015, Bowie’s death in early 2016 caused Chiklis to worry that people might confuse the cover as being something of a tribute. “For a time, I wrestled with the idea of taking it off the album,” he says. “But then I just said, “It’s a great version. People will attach whatever ideas they want to it, so that was it – it stayed.”

Chiklis recorded Influence at his home studio in California with a group of heavy hitters (Andres Forero, Scott Healy, Richie “La Bamba” Rosenberg and Jerry Vivino) lending support. Famed Toto guitarist Steve Lukather even came in and laid down his signature lines to a couple of tracks, and Chiklis raves about the axeman’s graciousness and musicianship. “Luke came in and was so friendly,” he says. “He said, ‘Produce me, baby!’ I made a couple of suggestions, and off he went. The guy just wails. All you gotta do is just stand back and let him play.”

Below, Chiklis lists and discusses his Top 10 Classic Rock Albums. And make no mistake: The man did his homework. “This was a tough assignment,” he says with a laugh. “How about 20 favourites, or even 50? These are in no particular order, but they really meant a lot to me during my life – and they still do.”

Influence is out now.

That’s my early life, my first massive recognition of rock‘n’roll. I was very young when it came out, but I remember it was being played in the house constantly. There’s so much to love about the record. How can you pick one song? How about all of them? I love the sentiment to Come Together, which is a classic in every way.

I actually used to cover Oh! Darling, which is a dynamite song of Paul’s. Maxwell’s Silver Hammer is a wonderfully whimsical tune, and George turns in two of his best songs with Something and Here Comes the Sun. The Beatles wrapped up their career with The End, which features Ringo’s only drum solo. Again, pick a moment – everything’s amazing

Queen – A Night at the Opera

In the ‘70s I got turned on to my favourite band. With Queen, it wasn’t just the things they were saying; it was the way they were saying them. They were probably the most unique-sounding group I’d ever heard. They were not only great musicians, but they were theatrical. I could name a handful of Queen albums as being favourites, but I have to choose A Night at the Opera because it’s an utter masterpiece.

Picking Bohemian Rhapsody is just too easy. But a great rock‘n’roll tune that meant a lot in my life is I’m in Love With My Car – Roger Taylor, a singing drummer, was one of my absolute heroes. And then there’s Sweet Lady and The Prophet’s Song, which is epic. Seaside Rendezvous is delightful. You get so many sides to the band, and everything works.

Kate Bush – The Hounds of Love

I don’t know if this is “classic rock,” but I’m including it. It’s an album that sort of rescued me, and I still can’t listen to it without weeping. When I was younger, I was in a very bad place at one point. I was young and things aren’t going exactly right – my family was kind of busting up. It was a bad time. But there was something about Kate Bush’s voice that just opened my soul and my heart. I still get emotional when I talk about this album.

I had been turned on to Kate a little before – Wuthering Heights and some of other singles. I think I became aware of her because of her work with Peter Gabriel. I was a huge Gabriel fan, so I was interested in what he was doing with her. But man, when I heard Hounds of Love… it really made a difference in my life.

That’s my teenage years, man. That’s partying, rocking, being in bands… This is it. This is pretty much the sickest guitar, vocal, drum and bass combination ever. Every song is the definition of rock. I could probably name at least three Zeppelin albums that had a massive impact on my life, but if you look at the songs on Zeppelin IV – Black Dog, Rock and Roll, The Battle of Evermore, Stairway to Heaven, Misty Mountain Hop, Four Sticks, Going to California, When the Levee Breaks – well, we can pretty much end the discussion right there. It’s a greatest hits album unto itself.

The whole band is great, but I have to give it up for John Bonham. As a drummer, I don’t even know what to say about him. He’s the guy. This is the way you wanted to play if you wanted to sit down behind a drum kit.

“I’m a huge King Crimson fan, and that’s how I discovered Adrian Belew. Mr. Music Head is one of his solo albums, and it’s brilliant – and quite unsung, in my opinion. Arian played every instrument on it; he’s one of the most talented guys around. Go and listen to the song 1967. If you’re a fan of the Beatles, this track will make you smile from ear to ear. Compositionally, he’s very influenced by the Beatles, but he doesn’t really try to copy them. He moves it forward. Adrian’s music is so thoughtful, soulful and unique. If you want to hear something you’re going to like instantly, check out Mr. Music Head.”

This is a biggie from my college years. 1984 is pure aggression and unbridled rock‘n’roll fun. When you say “rock albums,” this is a fucking rock album. It hits you right in the teeth. I could have gone for Fair Warning or the first Van Halen record, but I feel as if the band, across the board, nailed everything on 1984.

Eddie’s experimenting with the keyboards, but he still plays brutal guitar. And what about Alex and Hot for Teacher? Of course I had to try to play that. I tried to play everything he did – I’d sit down and play the whole album front to back. It’s a workout. Alex Van Halen is a very underrated drummer.

OK, I adore Rush. I love everything about them. I love every one of their albums – they can do no wrong. But to me, Moving Pictures is the culmination of all their skills and creativity coming together. Front to back, it’s a masterpiece, and it kind of epitomises what a real band can do when they share a vision. It’s three people becoming one.

I’ve seen Rush play this stuff live, and they’re unbelievable. Alex and Geddy playing the Taurus bass pedals and the keyboards, and at the same time Geddy’s playing that maniacal bass line on Tom Sawyer – while singing. These guys just have right brain/ left brain thing like nobody else. And then there’s Neil Peart. Nobody can do what he does. Nobody.

This is a toughie, because I really want to go with 90125. I love Trevor Rabin. I was really going back and forth on this one, but fuck it – I’m going with Yessongs. I can’t turn my back on Rick Wakeman and the classic lineup.

Once again, this is going back to my youth. It just reminds me of particularly good days sitting in my friends’ houses. This was an album that we would put on and trip out to. It was the soundtrack of the time – for a while there, it was always on. These were the days of vinyl – side one and side two. We used to wait for bands to come out with new records so we could buy them, and then we’d sit on the bed and listen while reading the liner notes. You went on a journey with Yes. You didn’t just listen to a song; you experienced a story as it unfolded.

A debut album that’s a total work of art. I remember when this came out – it seemed as if everybody in America listened to it for the next six months. Tom Scholz is a fucking genius. I mean, nobody got a sound like that before – both the guitar and vocal harmonies. He heard this sound in his head and he got it down on tape, and he did it all himself pretty much in his own studio.

You get in your car and one of these songs comes on – you’re gonna listen to it. You’re gonna crank it. From the first track to the last, it’s still relevant, and it rocks like hell. Great songs, beautifully written and executed, and they sound fresher than a lot of things being done nowadays.

This album is sort of the culmination of everything I love about Peter Gabriel. Everything he had done before led him to this record. It’s incredibly commercial, but it has teeth and it’s smart. It’s thoughtful and thought provoking, and it’s downright avant-garde in places like This is the Picture.

The songwriting is very advanced, and so is the musicianship. Tony Levin – my God! The way he plays the Chapman Stick bass – he’s like a drummer bassist. He’s incredibly melodic, but he gets that bottom. This is the record that brought Peter Gabriel to the masses – he had been still kind of underground till then – and it was great to see him break through with something that didn’t compromise in any way.