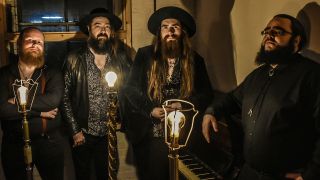 In times of strife we have historically looked to music to provide us with a much needed pick-me-up, and no genre has provided so much comfort during times of anguish as the cathartic, soulful melodies of the blues.

The blues has come a long way since its birth on the muddy banks of the Mississippi over 200 years ago, infusing its chants and ballads with jazz, rhythmic grooves and of course, rock’n’roll.

In this bizarre, unprecedented time in history, where we are all stuck at home and left face-to-face with unseen demons, the blues gods have once again provided, and gifted us fresh riffage in the form of UK blues rock powerhouse, These Wicked Rivers.

These Wicked Rivers marry the ferocity of Clutch, the Southern drawl of Black Stone Cherry, the hard rocking grooves of Monster Truck and the refreshing spirit of Black Water Conspiracy to create catchy and energetic bluesy rock’n’roll with a retro soul.

Receiving a slew of positive reviews for their debut EP The Enemy back in 2015, the band followed it up with 2017’s II, gaining them attention with the emerging New Wave of Classic Rock scene.

Seeing the positives in this isolated situation, the band explains that this time of introspection has allowed them to concentrate on writing again and bring new, exciting ideas to the table – something they've been enjoying as they also get stuck into releasing their debut full-length album, Eden.

The Derby quartet’s first single off the record, Shine On, encapsulates the bluesey classic rock sound the band has become known for with a catchy as hell sing-along chorus and infectious Southern hard rock grooves.

“I think we all know what Classic Rock means to the rock community, so to have that song picked up by the magazine was an honour, then for our fans to really support us on our desire to win that particular accolade was incredible.

“Our fans aren’t just fans, they’re friends and they back us to the hilt. We’re still a bit stumped as to what we’ve done to deserve such great fans/friends around us. It’s a very special thing.”

This lockdown period has also given the guys time to connect more with these fans online and they are excited to roll out some unexpected gems – like an exclusive album bundle to celebrate the release of their debut, Eden.

The unique Stay At Home Bundle offers their devotees an opportunity to enjoy their new record from their own homes, while touring is understandably off the cards (for now). Just what the doctor ordered!

The bundle comes with an exclusive mug, coaster, chocolates and, in proper British fashion, tea bags - so you can sip your tea while listening to the quirky old-time album opener Tea Leaves.

Additionally, grab the Stay At Home Bundle – available digitally and on vinyl-look CD – and check out bonus track Don’t Pray For Me, a firm live show fan favourite!