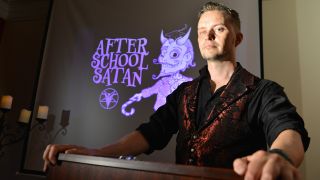 Lucien Greaves, also known as Douglas Mesner, may be familiar to you through his work with The Satanic Temple. Graeves set up the Satanic "anti-religion" back in 2013 along with co-founder Malcolm Jarry and has acted as the organisations spokesperson since its emergence.

If you haven't heard of The Satanic Temple, we'd advise you to check out the new documentary Hail Satan?; which traces the rise of The Satanic Temple, the establishment of their headquarters in Salem, Massachusetts and their public campaigns striving to promote egalitarianism, social justice and the separation of church and state.

We caught up with Lucien – who of course, is a fan of the Devil's music...– ahead of Hail Satan?'s release to find out his most inspiring tracks...

"I was thrilled when the band, during their tour, brought onstage former Dead Kennedys vocalist Jello Biafra to do a cover of Dead Kennedys Nazi Punks Fuck Off, slightly revised into Nazi Trumps Fuck Off."

"Blanck Mass has an eclectic discography that is consistently experimental, though ranging from hyper-aggressive to atmospheric and sedate."

"According to press, the central idea behind Zeal & Ardor’s Blues, Metal, Satanic Gospel blend is the question of 'what would have happened if the slaves of the deep south turned to Satan instead of God?'

"It is the music of the oppressed refusing to submit to the oppressors’ God, and as such it is an excellent soundtrack for Satanic ideals."

4. Scar Eater – The Worst Is Yet To Come

"Scar Eater is made up, at least partially, of members of The Satanic Temple in Arizona. Their live shows are incredible and listening to their music is oddly soothing, if you are calmed by vicarious unrelenting violent audio rampages."

"OhGr, too, consists of members of The Satanic Temple – or at least one, William Morrison, who served on our National Council and now oversees our soon-to-be-rolled out online platform.

"OhGr also consists of members of the legendary and groundbreaking industrial act Skinny Puppy. I pretty much loved everything these guys did before I met them, and they continue to make some of the best music available."