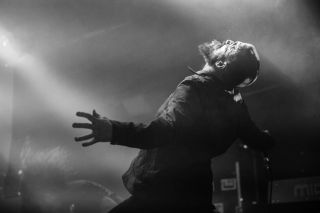 A locus point for the stoner, psych, sludge and doom scenes, Desertfest may now be an international event, having spread out to Berlin and now New York, but Camden remains its base of operations and feels like its natural home, in spite of the unsympathetic wet weather for its eighth incarnation.

With trucker hats, checked shirts and battle vests already amassing around the high street, 1968 are proving an early draw. The clue is in the name – big, fat, late-60s bluesy rock with nods to Hendrix, Taste and The Groundhogs, as well as a hint 90s stoner. The Black Heart is rammed for their hot’n'sweaty rock action, with as many people again queueing to get in.

Surprise standouts Blackwater Holylight play to an absolutely packed crowd at The Underworld, with people sardined up to the bar just to catch a glimpse and absorb the fuzzy vibes. They could have easily filled Electric Ballroom with their ambient blend of psychedelic vintage poppy hooks and crushingly heavy sludge.

“More reverb! More delay!” Grave Miasma’s descent into their customary madness is hitting a few initial roadblocks, thanks to a soundman who clearly hasn’t been counting on an occult death metal band featuring on the bill.

Hell is gradually prised loose, however, frontman Yoni Ben-Haim’s instructions soon becoming incantations as atonal riffs rev up into sonic cyclones, an unholy pact is forged between the precision of the blasts and the disorientating whorl as a Ballroom of onlookers are pulled into the kind of sense-obliterating psychedelic experience only the dark side can concoct.

Technical gremlins hit the start of Wovenhand’s Electric Ballroom set and sees them taking a good 20 minutes or so to find their flow. The sound never quite settles David Eugen Edwards' usually potent esoteric vibrato loses something of its magic in the boomy room and thus a band that are normally mindblowing are relegated to merely rather good.

Electric Citizen command the crowd of the Underworld, despite clashing somewhat with Wovenhand. Their upbeat rock’n’roll-charged doom is blast from the past, the Ohio rockers expertly channelling the likes of Sabbath and Pentagram, with a refreshing twist in the form of their captivating frontwoman, Laura Dolan. Her vocals have an elemental, Robert Plant-style power, complete with long flowing locks, era-appropriate jumpsuit and a dominating stage presence.

By the time Om appear at the Ballroom, the crowd is packed so tightly you wouldn’t be entirely surprised if it reached critical mass and collapsed into a single, blissed out sage nodding along.

If Matt Pike’s High On Fire siphoned off Sleep’s weed-swollen riffage, Al Cisnero’s trio have been left with the monotonous yet mind-altering chassis – the loping pulse that ran though tracks like Dragonaut distilled into a state of prone, third-eye-open enlightenment.

Tonight, however, there’s a little bit of swing to their locked-groove mantras, a carefully tended, jazzy shuffle that suggests the band have reached a higher, sensual state where the celestial guardians offer back massages.

Offering a jolt of adrenaline for the venue’s late-stayers, LA power-trio The Shrine are clearly dedicated to their far-side-of-the-country forebears the New York Dolls. But the energy they pump out tonight stems not from homage but the chemistry between guitarist Josh Landau and Amazonian bass player Corey Parks, their exuberance making them worth carriers of the rock’n’roll torch.

Visually, Årabrot frontman Kjetil Nernes is a far cry from his former incarnation as bare-chested, wild-haired seer-from-the-sewer. But as striking as his lanky frame is in somewhat more stark wide-brimmed pilgrim hat and braces, he could do with a bit of Nick Cave-style hamming it up to fully embody his skronky, post-punk-jolted artrock.

But if the staccato stomp of Maldoror’s Love sounds a bit too thin at the Underworld, it’s their cover of old spiritual Sinnerman that reveals the dark, dramatic power at the Norwegians’ disposal.

The venue convulses next with the bass-heavy sound of Glaswegian fuzzy sludge. Headless Kross blend punky vocals with a classic, slow tempo.

With ex-members of Cathedral and Trouble as well as current Witch Mountain, The Skull have a doom pedigree few can match, yet rather than trade on that they elect to play an Electric Ballroom set heavily culled from last year's excellent The Endless Road Turns Dark.

The title track in particular sounds huge. and when they do nod to past bands it’s to close with the single greatest riff in the history of doom metal: Trouble's The Tempter, then At The End OF My Daze. Absolute doom heaven.

Berlin’s Kadavar bring their trippy vintage grooves to Electric Ballroom, transporting us straight back to 1970. Their expertly crafted bluesy rock’n’roll blended with evokes early Pentagram with hints of Blue Cheer and psych rockers, 13th Floor Elevators. They harness the energy, aesthetics and power of the classic psychedelic era and captivate the crowd as though their seeing through a wormhole, a window back in time.

There’s a particular, precipitous state of anticipation that’s reserved for bands whose mission is to induce an out-of-body experience. You’ll find it in the moments before Heilung, Neurosis and Swans gigs, and it’s a tangible force in the build-up to Amenra’s appearance. It’s marshalled by the opening, heraldic clang of piping, (albeit unintentionally off the beat), summoned into Boden’s smouldering, tension-ratcheting intro and jacked into the elemental, incendiary surge that erupts, and from here on in, the Belgians exert a sonic traction that feels as if your soul is being hauled out of yourself, exposed to an uncommon degree of scrutiny.

Amenra’s stark aesthetic – minimal, monochrome lighting, black and white images of human unspoiled nature and abandoned outposts projected behind – becomes a total, immersive environment centred around frontman Colin H van Eeekhout’s wracked frame. Facing the back and exposing his iconic, gallows tattoo, his series of wracked penitential lurches, rich plaintive whine and deliverance-inducing howl are the crux of an hour-long set whose cathartic mass (in both senses of the word) leave you both shattered and cleansed.

Vancouver's We Hunt Buffalo are beyond chuffed to be here for the first time, and Desertfest reciprocates. This is big riff rock, soaked in fuzz and with a tasty hint of psychedelia, all delivered with an joyful energy that is infectious.

Florida natives Wrong belt out their unique blend of groovy riffage, powerfully gritty punk vocals and sludgy yet disjointed noise-rock beats reminiscent of early Corrosion Of Conformity, The Devonshire Arms is overwhelmed with people flooding in from Ballroom’s headliners, however, and unless you’ve shoved and shuffled your way around the entire bar and to the stage, you’ve missed out on the true vibrancy of the band.

There are some who will complain about Colour Haze’s lack of stagecraft or accompanying aptly kaleidoscopic visuals as they open proceedings at the Roundhouse, but watching a band so clearly in love with the music they’re making is captivating in itself.

Drawing from the main sources of the German psychedelic scene – Kyuss’s brlstling, luminous riff tone and the playful, motoric groove of krautrockers Neu! and languid, Eastern scales, the four-piece weave their own, lush, Vedic magic around jazzy, centre-shuffling percussion, receiving a rapturous response at the end.

London locals Wren play to a packed-out Black Heart despite having such an early set. Their chugging, sludgy drone consumes the small room like a bleak monster from the deep. The crowd spill out of the door, hoping to drown themselves in just a small amount of the dense atmospherics.

Earthless’s decision to introduce vocals, however rich Isaiah Mitchell’s tone might be, was in danger, on record at least, of turning them into yet another adept blues rock band. Live, however, the vocals act as a departure point for Isiah’s utterly unique fret-alchemy.

Extending long past any natural beat at which you’d think the three-piece would change things up, his 30-minute, teeming, sun-surface lead collapses all time into a bewildering and boundless present tense. As you stagger out towards the exit afterwards, you’re left convinced that civilisation and fallen, risen again and returned to some approximation of the state you left it in the intervening period.

Unfortunately, nobody seems to have got the memo about Sabbath Assembly. The Underworld remains disappointingly empty for their entire set, to the point where the aircon becomes uncomfortably cold.

Despite this underwhelming, and quite frankly alarming, lack of a crowd, the US occult rockers play exceptionally, vocalist Jamie Myers channelling Jinx Dawson and her devil-summoning incarnations. They’re a unique beast clearly lost on many, but adored by those who are savvy enough to be present.

J Mascis pioneered both the blastbeat with Deep Wound and slacker rock with Dinosaur Jr, and now has resurrected the gloriously catchy stoner rock of Witch. It's been 11 years since they released their last album but that doesn't seem to matter the Roundhouse.

So laid back they are almost horizontal, and heavy on the guitar noodling, All Them Witches feel like they should have been playing here at an all-dayer in 1971, possibly between early UFO and Pink Floyd. Catchy riffs and, at times, both enthralling and a little overblown.

The Secret, however, are on hand to rouse you out of your reverie. Unleashing a fusillade of d-beats, and with frontman Marco Coslovich looming over the crowd and goading everyone to get involved, the band’s crust-laden assault is given added apocalyptic tension by the blackened, droning riffs that orbit the sound.

Haunting Italian doomers, Messa, fill the tiny gig space at the Black Heart with their ethereal yet heavy psychedelic sounds. The hefty haze of base tones and hot bodies sardined into this pitch-black room only adds to the murky texture of fuzzy yet jazzy guitar riffs, chunky, plodding beats and powerful, enchanting voice of Sara.

Her lyrics echo, summoning you to ‘raise your chalice’ and magically whisk you away to the deepest part of a moonlit forest to partake in her ritual, yet you remain calm, comforted under her spell.

If ever a band personified the desert in Desertfest then its Fu Manchu, and from the opening fuzz salvo of Pigeon Toe and Hell On Wheels it really feels like a homecoming for the Cali quartet. From Regal Beagle and Evil Eye, through to King Of The Road and Saturn III, Scott Hill leads his crew through a set chock full of red-eyed tales of boogie vans and skating dried out swimming pools that pretty much set the standard for a whole world of stoner rock. Closing with their take of Godzilla, Fu Manchu crush the Roundhouse with a giant reptilian stomp.

Despite playing at 1am on the final night of the festival, Mondo Generator had the Underworld absolutely heaving with life – so much so in fact, they probably could have done with putting them on at the Roundhouse. It’s tough for most of the crowd to grab a glimpse of Nick Oliveri and co. Kicking off with of Kyuss’s Molten Universe, the band follow up with both original songs and more covers. The band rip it up with Green Machine and Allen’s Wrench, much to the crowd’s delight. What an end to a spectacular festival!