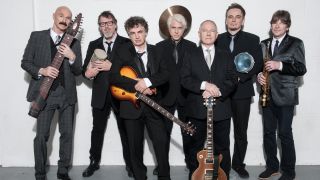 Will the UK shows be the same as you played in the US?

No. We’re going to add songs; catalogue stuff and some brand new things.

Yeah, but Robert [Fripp] won’t play anything bigger than two-and-a-half-thousand-capacity. So we end up doing multiple nights.

There’s some amazing YouTube footage of Gavin Harrison, Bill Rieflin and Pat Mastelotto rehearsing their synchronised drumming. How does their playing go down at gigs?

The response to the three of them playing together has been quite extraordinary.

Last year Robert said: “[This is] the first Crimson where there isn’t at least one person who actively resents me”. That’s a pretty remarkable statement.

And it’s very Robert. This is Robert’s band. But he’s not dictatorial in the way that I suspect Frank Zappa might have been.

Surprisingly, In The Court Of The Crimson King wasn’t in the set- list for the US shows.

In interviews Robert said: “If you’ve bought tickets expecting to hear that song you might as well sell them.” But some of the stuff we’re reviving is very, very exciting.

Talk of new material suggests there could be a new album?

Robert does have a long-term plan, but how that might manifest itself, I really don’t know.

Is Robert as cantankerous, obstinate and difficult as he is often thought to be?

Not at all. He won’t thank me for saying so, because I suspect he quite likes that reputation.