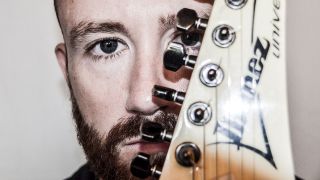 While large swathes of their peers are happily pounding mud, Mithras’s position in the death metal universe has always been akin to the Hubbble telescope, gazing imperiously across the heavens and tracking celestial phonemona beyond the scope of mere mortal minds.

If the British band isn’t mentioned in the same awed breath as the similarly senses-overloading likes of Nile, the nigh-on 10-year absence since the release of Mithras’s last studio album, Behind The Shadows Lies Madness probably has something to do with it. But thankfully the stars are aligning once more and the band – based around core nucleus drummer/guitarist/keyboardist Leon Macey and vocalist/bassist Rayner Coss are returning with their most scintillating album yet.

Due to enter the Earth’s atmosphere on October 21, On Strange Loops takes Mithras’s bewildering blend of hyper-dense yet stupendously lithe dynamics and vast, nebulous lead breaks as if Trey Azagtoth was just their booster rocket futher out into rarefied territories than ever before, and we have an exclusive stream of the album in its full, mind-melting glory. Sadly, this wil be the last album recorded with Rayner as he announced his departure while it was being mixed, but no doubt Mithras will evolve once more. For now prepare to have your protons torn apart by the seismic, pscychedelic overture that is On Strange Loops, and gain further enlightenment by reading our interview with Leon Macey below!

Set your co-ordinates for Mithras’s Facebook, and all the stardates for their forthcoming tour here!

It’s been nearly 10 years since your last studio album, Behind The Shadows Lie Madness. Did you find yourself picking up the same narrative thread that’s run throughout previous records, or did the time between releases give you an opportunity to reassess any aspects of the band?

Leon Macey: “Yeah, time flies! I actually made a conscious decision back in 2010 when I began working on the tracks for On Strange Loops that I wouldn’t be continuing with the narrative centred around one character, which ran through our first three records, as I feel that story naturally concluded with the death via self-sacrifice of said character at the end of Behind The Shadows…. I was satisfied with how we’d handled the story overall, and looking back I’m not sure there was much more to be said, really. At this stage I was planning to handle all the recording of the new album myself, including the vocals, but in 2011 Rayner Coss came back onboard. So this was a good moment to reassess the conceptual side of the band and meant that going forward we could tackle something on a grander scale with the new record, namely time…”

The last few years, possibly in a less sophisticated form than Mithras, has seen occult themes and a sense of the ecstatic return to death metal. Do you find any new kinship with the current state of the scene, or is there a vantage point to be gained from standing apart?

“I agree, there’s definitely been a rekindling of death metal with what some people would term ‘the old feeling’, which is great as to be honest I’m not really a fan of most modern tech-death bands where that feeling is quite absent and something more mechanical and soulless has replaced it. I’m not really sure I feel any kinship in particular with the new bands, though, mainly as Mithras have always stylistically been a bit of an aberration: brutal, yet atmospheric, epic yet ambient, so there’s not really a group of bands I feel we fit in with these days. We’re always been set apart from other bands since we started and never really fit in with a scene.”

On Strange Loops seems to be a combination of discipline and delirium. How do you see the relationship the two and what to you see as the purpose in reaching altered states?

“Totally. the album is meant to be those two states meeting at an apex. Using your descriptions; discipline-wise, the record represents thousands of hours of work and the perfecting of my craft as far as was practicable, but alongside that technically solid foundation is the other side of the band; for delirium we have the spontaneously recorded solos, the heightened states we’re trying to invoke in the listener (and ourselves) through the music arrangements and lyrics, and the way we tried to capture takes which are technically solid and sound but still have a certain ‘otherness’ to them, which hopefully takes it all beyond the base ingredients. All the music I’ve written in Mithras has been about giving form to a feeling inside myself, which normally manifests via the lead guitar parts, where you have the dichotomy of the emotional sounding and sometimes melancholic leads set against the monolithic backing parts, the super fast kick drums and imposing riffs.”

There are probably some who see science and spiritualism in opposition to each other, a view I imagine you don’t share. How has your background in astrophysics impacted on the spiritual themes explored on the album?

“Yes, I don’t agree at all that science and spiritualism are opposed to one another, just that spiritualism as embodied by most religions has a long way to go before it can meet up with science. On the other hand I truly believe there are many phenomena in the universe which are currently better described by religious terminology, but that’s only as a result of us not understanding the science yet. My (ongoing) astrophysics studies have definitely broadened my horizons as regards both subjects; I think we’ve got so far to go before we can adequately describe and categorise the nature of reality. As to the new album, studying cosmology, specifically the nature of the universe and different models for it’s birth and potential death gave me a host of ideas for the record.”

The experience of time appears to be a strong theme on the new album. Were there any particular theories you wanted to explore with On Strange Loops. A running theme throughout the band has been what lies outside of subjective consciousness. Was that a consideration here too?

“The entire album is themed around the passage of time and what it means for humans at multiple levels; in the distant pasts, in the modern day and even in speculative futures where our distant progeny have transcended physical limitations to a degree. The universe as described in the album lyrics is one which is bounded yet eventually suffers a heat death, where everything becomes cold and dead, and at the end of the album the characters in the story postulate that in future billions of years it will rebound on itself and re-contract to initiate a new ‘big-bang’ where everything will begin anew and thus lead to a never ending cycle of death and rebirth. Given that limited future where they are stuck inside a closed loop, using all their scientific prowess they decide to take a leap into the unknown, into another realm or reality ‘outside of subjective consciousness’ and that’s where the story is left.

“Based on current scientific thinking the model I described above doesn’t apply to our universe as far as we know it, so it was interesting to write a story based on these “out of date” theories. That said, the themes covered by the album concept and questions posed therein are clearly applicable to the nature of our own existence; how the passage of time and vast distances already impact on us and how to make the most of the little time we do have while searching for knowledge and trying to improve the prospects of the human race.”

Was it shock to find out that Rayner was leaving the band during the recording process? How central was the relationship between the two of you to the band and what is the next step for the band?

“It was somewhat of a shock, but if I’m honest there had been signs for a while that our creative partnership had probably run its course and this would be the last record we would make together. That said, we made sure that On Strange Loops was as good as we could make it, Rayner made some great contributions to the record, but I was really hoping we’d be able to play some live shows together in support of the album or at least finish the album together. Luckily he had already recorded most of his parts when he told me that due to time constraints, he would likely be leaving Mithras by the end of the year after the album release, so his leaving wasn’t as disruptive as it could have been.

“I’ve taken on the vocal role and we also brought in a brand new bassist, Vic Lochab to complete the lineup. It’s worked out great; we’ve played a few shows with me as frontman and due to everyone being on the same page the Mithras live lineup is closing in on the strongest it’s ever been in the band’s history. On Strange Loops is coming out on October 21st on my label Galactic Records in Europe / Willowtip Records in North America, and we’re hoping to do a lot of shows to support the release, including a UK tour from 26-31st October this year and a slot at Damnation Festival, so come and check us out!”