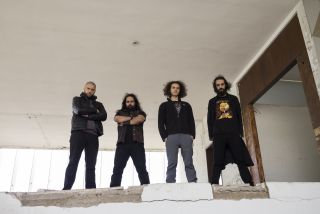 Despite all the beer kegs and zombies running rampant throughout thrash lyrics nowadays, the scene was founded on a sense of immediate crisis and political resistance, all of which are defining features of Beirut’s Blaakyum.

Formed in 1995, in the shadow of the devastating Lebanese civil war that resulted in 120,000 deaths and tens of thousands of people displaced, the four-piece might have gone through various line-up changes, but the core message of defiance, liberty and the struggle against corruption and repression still remains a lightning rod 24 years later.

Now their homeland is upheaval once more, as over a million people rise up in protest against a sectarian government overseeing the collapse of their country’s infrastructure and punitive, rising taxes, to be met with escalating violence. Blaakyum’s founder and frontman Bassem Deaibess, has long been a voice of resistance, and his band are releasing a timely and inspiring video for the song Destined To Rise, taken from the 2016 album, Line Of Fear - and you can watch it exclusively here.

Featuring the band performing in The Egg – an unfinished cinema chassis that was halted by the Civil War and never completed – along with footage of the first day of protests on October 17, 2019, the song is both a call to arms and a reminder of the historical roots of the current crisis.

“Blaakyum have always tackled the issues of political and social corruption since the band's conception,” says Bassem. “Through metal music we always tried to revolt against our reality in Lebanon and its oppressive system. The recent revolution in Lebanon was long due and we were more than happy to see it finally happening. Lebanon has been hijacked by its gang of criminals called ‘political leaders and government’ and now we are trying to take it back.

“The metal community in Lebanon has always been a victim of corruption, we were the scapegoat whenever the politicians and religious authorities wanted to display power, or when they wanted to cover their crimes and divert attention... It is PAYBACK TIME. We hope the international metal community enjoys the video and support our revolution, in the meantime we are finalising our new album that should be released in March 2020.”

Bear witness to the uprising and watch Destined To Rise below!

Get more background to the uprising and visit Blaakyum's Facebook page here!