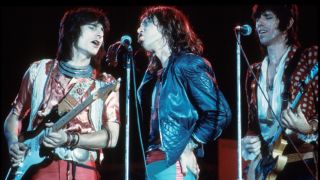 No-one will ever agree upon exactly how many people turned out to witness the Rolling Stones perform at Hertfordshire’s Knebworth Park on August 21, 1976

The Rolling Stones were not only the world’s biggest band, they wholly defined what rock’n’roll should be. Dissenting punk voices had yet to dent their legend and the gushing music press was still very much on side. If you were a rock fan in 1976, you wanted to go and see The Rolling Stones at Knebworth. There was simply no excuse not to.

A series of early summer gigs at Earl’s Court had been massively over-subscribed, had sold-out rapidly and, thanks to appalling sound, were disappointing. Demand for the Stones had never been so acute and with rumours rife that Knebworth was to be their last ever show, even those unable to secure one of the precious £4.25 tickets were determined to attend. We set off at 6am and ultimately abandoned our car by the side of the road to make our way to the site on foot as the traffic gridlocked. An unmanageable sea of humanity jostled to gain entry as The Don Harrison Band came and went. The narrow entrances were hopelessly inadequate, but following a three-hour heave we popped through the fence like corks from a bottle to witness the last knockings of Hot Tuna and to marvel at a crowd that surpassed the horizon.

Picking our way forward we finally secured a square foot of discomfort at least 100 yards from the stage; in other words, surprisingly near the front. At which point Todd Rundgren led Utopia onto the stage to a polite ripple and delivered a workmanlike set that concluded with an appropriately explosive Hiroshima.

After breaking out the fish-paste sandwiches – we knew how to live in the 70s – a band we’d never heard of launched, without fanfare, into a song that was evidently called Freebird and, as it gradually metamorphosed from gentle uplifting ballad to all-out guitar firefight, the vast audience’s response went from indifference to adulation.

Thirty-one years on and I’ve never witnessed a crowd react to a support band in the same way that Knebworth did to Lynyrd Skynyrd. Somewhere between the first chorus and the second verse the band went from unknown names to full-fledged stars. “Skynyrd caused a real buzz backstage,” remembers Freddy Bannister. “We all wondered how anyone could follow them.” An hour later, we all began to wonder if anyone would even try.

10cc were the next billed attraction, but as the break between bands lengthened, rumours began to circulate that they were facing serious technical problems. “It was their own fault,” insists the promoter. “They’d been trying to upstage the Stones ever since arriving the previous day. There was a buzz in the sound system that the engineers were trying to sort out. But after 90 minutes, I went on stage and told the band either play or go home. Their response was, ‘Would you still pay us if we didn’t play?’. Fortunately, I didn’t have to answer, because the roadies then sorted it out. But I’m convinced that they induced that buzz, in order to take the Stones’ slot.”

We plebian field-dwellers, meanwhile, were more worried about the potential non-appearance of the Stones than any catastrophe that might have befallen 10cc. As we took our courage in both hands by visiting the toilets (effluent-brimming plague pits that mere words cannot even begin to describe) and considered investing our hard-earned 18 pence in intimidating giant hot dogs, the Stones themselves were roughing it at a pre-show champagne reception with Jack Nicholson and John Paul Getty III – a scenario akin to The Masque Of The Red Death with vol-au-vents. 10cc’s long-awaited appearance, meanwhile, proved a singularly soulless and clinical affair. Their latest I’m Mandy, Fly Me single and its iconic predecessor I’m Not In Love were both heavily dependent on pre-recorded inserts that many in the audience considered tantamount to miming. Standard practice now, of course, but utterly unacceptable in the mid-70s’ climate of Luddite authenticity.

There was beer available somewhere on the vast site apparently, but it was a luxury we could neither find nor trust our bladders to retain. One visit to the medieval latrine was enough for one lifetime and so, as darkness fell, we simply stood our ground, tried to banish all thoughts of Altamont and prayed that the local constabulary didn’t intend to enforce the midnight curfew that was already drawing close. As festival infrastructure (second stages, novelty hat vendors, healing fields, comedy tents, bungee jumps, noodle bars… arena lighting, urinals) simply didn’t exist in 76, our only extracurricular entertainment was provided by a streaker who took to the stage and enthusiastically masturbated before diving triumphantly into the heaving throng. Popular legend provided the bittersweet postscript that he broke both ankles on landing, but in that he provided us with the finest entertainment we’d witnessed since Freebird, we could really only wish him well.

As the delays continued, an ominous mood descended. Amid wildfire rumours that the Stones had already left the site and an official announcement of cancellation was imminent, the already minimal crowd lights were extinguished and the mid-section of Pink Floyd’s Echoes (the bit that sounds like ghostly seagulls) began looping repeatedly over the PA. Tensions rapidly increased and time seemed to stand still as the unmistakable sound of fights breaking out was only punctuated by increasingly desperate demands for the lights to be turned back on that were simply ignored. Presumably at their Satanic Majesties’ request.

“A lot of it was down to 10cc,” Bannister says of this purgatorial wait. “But the Stones delayed things for another hour because they were too busy posing and acting like rock stars.” Finally, after an interminable pitch-black ordeal in Hell’s own waiting room, countless searchlights seared our eyeballs as Aaron Copland’s Fanfare For The Common Man heralded the arrival of The Greatest Rock’N’Roll Band In The World. The overall effect was totally staggering – probably unlawful under the Geneva Convention, but totally staggering all the same. The purpose-built stage’s canopy had inflated under cover of darkness into a pair of immense lips, and as Keith Richards punched out the riff to _Satisfaction _at the end of an extensive walkway at stage-right, Mick Jagger pranced onto its tongue in a leather jacket and tights combination that (according to the following morning’s Daily Mirror) made him look like ‘a gay Richard III’. One hundred and fifty minutes later than billed the Stones delivered a performance that was, to Wyman’s calculations, “the longest show we had ever played”. From the brand new (Fool To Cry), to the vintage (Around And Around); the rarely heard (Get Off Of My Cloud) to the seasoned set-pieces (Mick Jagger whipping the stage with his belt at the climax of Midnight Rambler), the Stones perfectly précised their already vast legacy into a crowd-pleasing set of, apparently effortless, world-beating class. As traditional show-closer Street Fighting Man finally reached its climax there were sighs of relief backstage.

“We were supposed to finish by midnight,” Bannister remembers, “and it eventually ended at about 2am, I think David (now Lord) Cobbold, who held the licence, got fined £2,000.” As The Who’s Baba O’Riley provided the triumphal soundtrack to our first stumble into an unlit ditch, we staggered off into the breaking dawn. It took four hours to find the car, but as we’d just seen Keith Richards smoking a cigarette, we didn’t mind a bit.

This was published in Classic Rock issue 109.