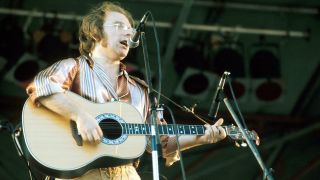 On this day in 1974, Knebworth Festival – its first edition named the Bucolic Frolic – lurched into life for the very first time. Over the years everyone from Zeppelin to Chas & Dave have taken turns entertaining the crowds at the now legendary venue, and its significance to rock fans was renewed in the late 2000s with the launch of Sonisphere Festival. Back in 1974, it fell to Tim Buckley, Mahavishnu Orchestra and the Allman Brothers to helm the inaugural event – we bring you the highlights below…

Tim Buckley opened the festival with his first UK performance in six years – fatefully, it would also be his last ever UK performance, as he died of a heroin overdose less than a year later. His full Knebworth set can be heard on the Return Of The Starsailor bootleg.

Despite being faced by a crowd of hungover longhairs waiting to see some hippy music, hard rockers the Sensational Alex Harvey Band goaded the crowd into action with a camp, theatrical performance and demands that they “get their asses off the ground”.

And now for something completely different… Jean-Luc Ponty, John McLaughlin and the rest of an extended Orchestra turned down the pace with an “otherworldly, mystical” performance that was heavy on surreal strings and warped prog rock.

Van Morrison – his usual, taciturn self – experimented with harps and saxophones for a set that was soulful, bluesy and packed full of hits. A Brown Eyed Girl encore was the set’s inevitable highlight.

Cynical hippies typically dismissed The Doobie Brothers as a mainstream cop-out, but on the night of Knebworth, a set of funk and soul won the crowd over and roused them into an evening mad dancing and wild abandon… not that they needed much help with the latter.

The Allman Brothers finished off the night with a three-hour set of extended, bluesy jams. Their intricate playing failed to grab the attention of the crowd, who gradually peeled off to join whatever higher plane they’d be accessing that night.

The Allman Brothers at Knebworth 1974 setlist on Spotify

Fly On The Wall: The Worst Festival In History